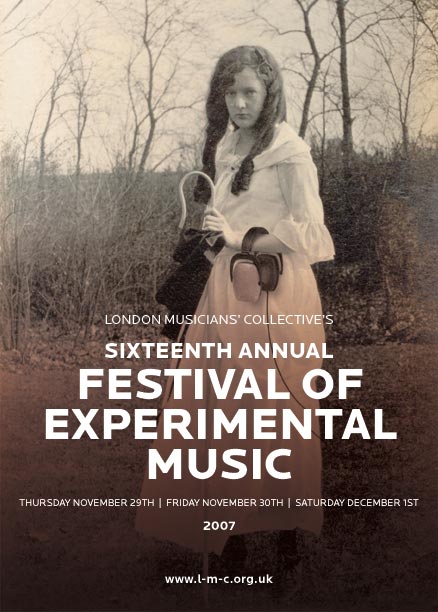 Don’t forget to go to the London Musicians’ Collective Experimental Music Festival in London this year. It starts on 29th November 2007 and ends on 1st December – the same year! What a way to mark the changing of the months. If you live in London, it’s at the Cochrane Theatre in Southampton Row. If you don’t live in London, it’s still at the same venue, only more wood panelling is involved. I remember I went to one of these LMC festivals a few years ago and it was quite good. They used to be held in May, and now they aren’t. This year features some of my favourite musicians. The larger-than-life Charlemagne Palestine will be skied over from Belgium in a big tea-chest. For his music he has often covered a grand piano with lots of soft toys. When he did it in Gateshead for Barry Esson’s festival, they had to buy the animals specially from a local shop called Bear Heaven. But on this occasion he’ll be doing his double-harpsichord piece. Taku Sugimoto will also be performing, but barely. I understand he’s so quiet these days that you have to use inbuilt sonar devices you never knew you had just to say good morning to him. If he brings his guitar, chances are it’ll be wrapped in cotton wool. Angharad Davies is the sister of Rhodri Davies the harpist from Wales. I never heard the sister play, but if she’s anything like the brother then you’ll be skinned alive by the severity of her strings – assuming she plays a stringed instrument, that is. Norbert Möslang is the Swiss noiseter who used to be one half of Voice Crack. He was more fun back in the 1980s and 1990s, but even so the way he wields his weird electronic devices usually makes the mice come out to see what all the commotion is. The UK contingent features the reliable player John Butcher, the saxophonist who can empty a warehouse of cardboard boxes with one blow of his steel monster. There’s plenty more names on offer: Steve Beresford, Yasunao Tone, Bob Levene, Julia Eckhardt, Michael Duch, Robin Hayward, Matt Davis, Tony Buck, Burkhard Stangl, Margarida Garcia, Barry Weisblat and Helena Gough. There may be exciting combinations of players the likes of which you will have not have encountered since Derek Bailey’s Company Week, where there used to be fist-fights breaking out on a regular basis. You can get a Festival Pass to enjoy all three days for only £35, which is about the price of two sandwiches in the V&A cafeteria. So what are you waiting for?