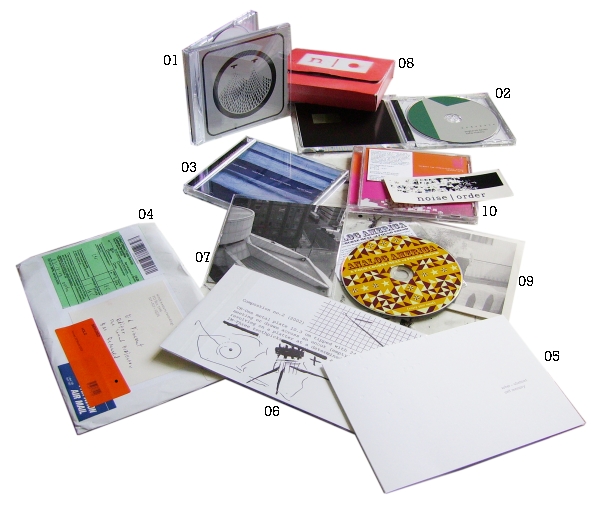 Following a friendly greeting from label owner Simon Reynell, the entire catalogue of his label Another Timbre is now in my hands. These are eight CDs of what promise to be cutting-edge examples of quiet, minimal and reduced improvised music. A relatively new venture, yet already the label has a clear identity in terms of its thematic unity (which, in places, appears very Zen-like) and the visual harmonising of the cover artworks; uniform typography, lower case lettering (natch!), and restrained yet striking imagery. at06 is A life saved by a Spider and two doves [01], which features the veteran players Evan Parker and Max Eastley playing alongside the subdued computer of Graham Halliwell and unobtrusive percussive work of Mark Wastell; Parker’s trademark bubbling soprano sax is used to delineate the swarming activities of ‘Human Fireflies’ on track 2. Endspace (at05) conversely is a much more bleak affair, showcasing the chillingly sharp violin of Angharad Davies and the scrapey piano wires of Tisha Mukarji; on this stark release, the music, titles and artwork are about as minimal as it’s possible to get, creating the impression of a conceptual art installation which you can use your ears to explore [02]. The great harpist Rhodri Davies (brother of said violin player) is on Hum (at04) with Matt Davis, Samantha Rebello and Bechir Saade, playing ultra-quiet woodwinds and brass. This quartet would appear to offer you the last word in restraint, yet just listen to the understated power on the second track for example, which is like being slowly simmered in a frying pan with one ounce of clarified butter [03]. Also out: An account of my hut (at08) by Clive Bell and Bechir Saade; the analogue synthesiser of Thomas Lehn on Obdo (at07); Tempestuous (at01) by The Contest of Pleasures, that excellent pan-European trio; Phil Minton‘s groaning voice on Tasting (at02); and Frank Denyer‘s Music for Shakuhachi (at03), all of which I look forward to exploring in greater detail. Another Timbre is perhaps shaping up to be a label of the same quality of Erstwhile, For4Ears, or the much-missed A Bruit Secret.

More ultra-minimal soundworks, but of a very different kind, from the label winds measure recordings in New York. Like Another Timbre, this label has a very distinctive visual identity and also favours lower-case typography. The best thing about the packages is the extraordinary use made of letterpress, a craft which I always assume has all but vanished in the age of digital typesetting. Even the address label on the envelope [04] sent to me has a series of concentric rings embossed in blind (and I suppose it won’t be long before the meaning of the term ‘in blind’ is forgotten too). Two fine limited-edition CDR releases were sent. Asher and Ubeboet have cell memory (wm 09), with two long tracks whose ingenious titles seem to cancel each other out while the long-form drifty sound art seems to be transacting on the same microscopic level as the cells whose memory they celebrate [05]. Civyiu and Ilya Monosov have made cartolina postale (wm 07), a title which seems tailor-made for the landscape-format wallets which this label uses for all its releases. Sure enough, the CDR is mounted on a piece of sturdy card, again decorated with letterpress, and each release individually numbered. The front of the card [06] shows, in text and illustration, the instruction for the composition; the improvised music (which is barely discernible), is something to do with toothpicks, a music box, a metal object and a piece of vinyl without any grooves. Extremely challenging to hear this; you may wonder if something so apparently vacant can possibly contain the artists’ notions of ‘place / time / memory / distance’.

The very wonderful erikm from Marseilles is here again with Stéme (ROOM40 RM426), a piece of severe electronic music apparently derived from pure process [07]. It’s something to do with deliberately damaging the media on which pieces of music and recordings had previously been burned, and modifying the results yet further in various elaborate ‘real time live music systems’. This talk of playing merry hob with compact discs is making me nostalgic for the times when Bruce Gilbert used to do it in the 1990s, performing live with a random selection of damaged CDs, which he deliberately spray-painted black so as to make the process even more random. He managed to summon up great thunderstorms of noise that made you think the world was ending. erikm however is producing something much more precise and controlled on this record, tossing digital micro-shards around like so much tossed salad. There are some overlaid and interrupted field recordings too.

Got a nice little box from Noise / Order Recordings in Seattle, which has been spray-painted red so as to reveal their logo stenciled on the back [08]. One of their releases is quite a curio. Analog America: A four course meal of Found Sound is a compilation of recordings put together by Amber Kai Morgan and Garrett Kelly [09]. ‘Found sound’ in this instance means tapes from telephone answering machines rescued from thrift stores in the USA, and occasionally I would guess home-made cassettes, taped letters, that sort of thing. They’ve been collecting this material for many years and have lots of anecdotes to tell inside the cover. It reminds me somewhat of the Trachtenburg Family Slideshow Players (also from Seattle), who collect discarded family slide photographs at yard sales and junk shops to use as visual backdrops for their music. Plus there’s that website which specialises in exhibiting photographs of obscure and odd messages found lying in the streets. To me it feels uniquely American somehow, this interest in recycling overlooked detritus from the past. However, while John Trubee was interested in creating nasty prank-call recordings to capture glimpses of the seamier side of blue-collar America, this collection is much more gentle and surrenders freely to the charms of serendipity. The strange acoustic qualities of these old and distressed recordings only adds to the charm. Also sent: Release The Cheerfulness, China – Ground Up 2, which is one hour’s worth of field recordings and street music from China made by Jason Kopec [10]. I’m personally more attracted to the chaotic street sounds he fetches back, but Kopec is equally interested in making straight documentaries of the music he has found in that country. While not a patch on the work of Rob Millis or Mark Gergis, this promises to be quite a grower.