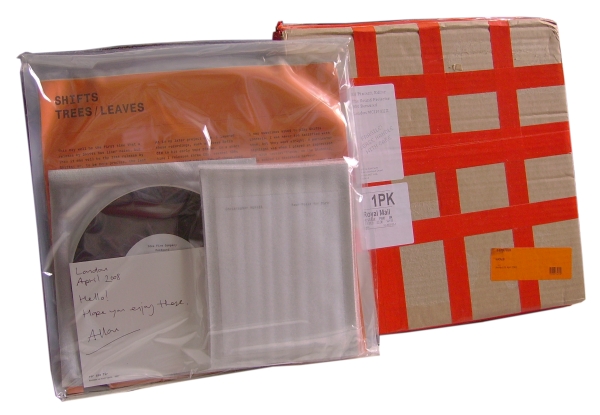 A fine bewildering package sent from Allon of Entr’Acte, a UK record label named after the famous Surrealist movie by René Clair and which it looks like might be devoted to the choicest cuts in avant sound-art dronery and electronic buzz-swarm attack. The owner clearly has in his possession a heat-sealing device of some sort and wants to package everything he possibly can in clear vinyl wallets and cellophane wrappers with sealed edges, much like Gen Ken in New York laminates anything that moves. On receipt of this box I felt like the astronauts on the Jupiter mission in 2001 : A Space Odyssey with their packets of nutritious space food. I found that not only were all the records (vinyl and CD) inside individually heat-sealed, but so was the entire package itself. Sensuous shiny shapes result, especially for the 12-inchers. But I still haven’t played a note of music at time of writing. Wait until I find my kitchen scissors. The Idea Fire Company 45rpm single Lost At Sea (E51) will be of interest I am sure – it’s from their European tour of 2005 and Frans de Waard is on the record alongside American avants Scott and Karla. Frans is also responsible for Shifts and Trees / Leaves (E43), which is the ‘quiet guitar’ project of this great Dutch genius. Filter Feeder has produced Pleasure Cycle / Peak Oil / 13/ 11 (E44), an extremely cryptic title which to me reads like a few frames from a Jean-Luc Godard film shot in a gas station. Julian Doyle is Filter Feeder and (from his sleeve notes at least) is a process artist who leaves very little to chance. How will this one sound? Or the one by Kallabris which is called Hund Vor Die Tür (E49), apparently some sort of tangentially-skewed concept LP about dogs and the canine world? All the vinyl records allow a three-columned sleeve note for the artist to present a smattering of contextual ideas for us to chew on, and the label’s design sense is utilitarian and uniform, allowing a clarity right down to the large, no-nonsense serif font that is used for the catalogue numbers, which as you can see are as basic a deployment of alphanumeric references as you could wish for. Lastly, my hands are caressing a fat pouch which probably contains many CDs sealed up in foam packing. On the top of said pouch, the name of Christopher McFall is visible, suggesting he recorded Four Feels For Fire. I’ll have to let you know how these items actually sound when spun and determine artistic merit at later date, but the vibe here is that all material is credible and worthy of attention. Also note the use of red tape on the package, a gesture which can’t help but remind you of the work of artist Eleonora Aguiari (who wrapped Lord Napier’s statue in London), but also the grid-based works of late 1960s conceptual artists…now I feel like I have a cardboard miniature Donald Judd piece of mailart in my home.