Here we see two LP records, Die Sonne and Die Wille. These two foreboding slabs of extreme electro-acoustic art were sent to me by Raymond Dijkstra, who calls himself Le Souffleur for his sound-art endeavours. At time of writing I must confess I have not managed to sit through any one of these four sides in their entirety, as I find the music incredibly bleak, tense, and angst-inducing. Both these records are filled with strangely non-musical scrapes and squeaks as of something produced by some badly-oiled machinery, all set against a recurring backdrop of extremely discordant chords played on the harmonium. Some delicate and judicious use of electronic echo enhances the scrapes every so often, spinning them off into abstracted realms of controlled gestural noise. These are not especially loud or obnoxious records; indeed, their quietness and restraint borders on the clinical. Rarely have I encountered something that fills me with such a sense of isolation and dread; impersonal, cold, almost terrifying, these records present bleak statements about the unknowable nature of a vacant and meaningless universe.

As you may have gathered, Le Souffleur’s records may not be exactly to my taste. However, I still think the man’s work deserves your time and investigation, and this for two reasons.

(1) He clearly believes whole-heartedly in what he is doing, to the extent that having crafted the work he funds it completely by himself, and for all I know he even runs the mail order business to sell the work through his website. His fierce dedication to creating a quality art-statement product is amply reflected in the sumptuous production values for these records. Just look at them. Casebound in black linen, embossed in gold and in blind, with elaborate cardboard mounts for the records which include rolled spines with gold lettering. Each artefact is individually numbered, and the paper sleeve is signed with a soft pencil by the artist. These are more like luxury edition art books than record albums. (See here for some intriguing pictures). There’s also his insistence on the utter superiority of vinyl as a representation format, which aligns him with American Scott Foust (another electronic loner whose name often appears alongside the word ‘uncompromising’).

(2) Le Souffleur, like all good dedicated artists, has created a hermetic universe all of his own. The fact that I can’t readily apprehend its dimensions is more to my detriment than to his. These two records are just two key statements from a larger cosmology, one ruled by a very particular choice of words (the titles are in a language called Middle Dutch, or old Dutch) and precise symbols as esoteric as anything you’ll find in an Alchemist’s engraved handbook. The mystery is simply deepened by the inexplicable and, in places, haunting sounds that can be heard should you purchase one of these limited-edition artefacts from another world.

As a footnote, I exhibit below the current incarnation of the parcel which houses the two discs. Its postal history probably tells its own story, one which I won’t bother to repeat here. I think it says something about the perilous journey which art must undertake on its path to find the right pair of ears. It’s often like sending a message in a bottle. Also we should note that a feature on the work of Raymond Dijkstra is forthcoming in Eric Lanzillotta’s Bixobal magazine. 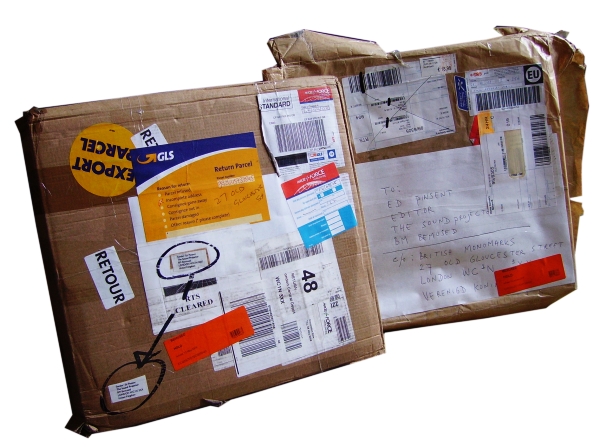