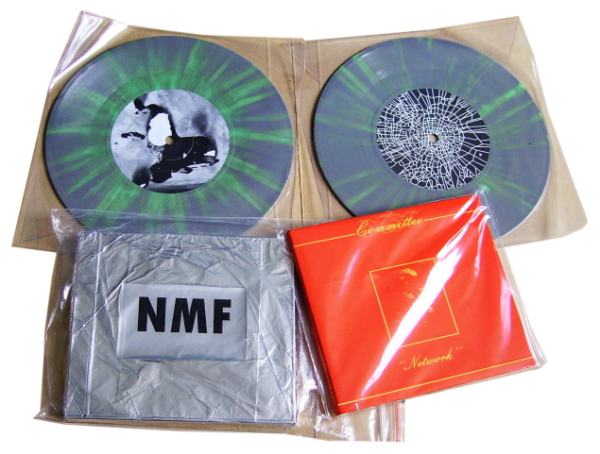 This is the percussive noise made by an amorous hermit crab as it beats out a friendly tattoo on the shell of a potential partner…babababdadadb—also the drumming of Charles Hayward, pounding and singing on this new coloured seven-inch single Out Of Order c/w Beside (DOTODOTDOT005V). The existential pun made by Hayward’s lyrics is along lines of ‘out of order comes forth chaos’, a neat reversal of mainstream theories of evolution and/or entropy. His view is illustrated by varispeeding tapes at start of this fine drum, drone and vocal recording. This and a similar (in physical shape and colouration) object by The New Blockaders, Force Majeure (DOTODOTDOT006V). Hereon, UK’s most distinctive and inexhaustible avant-garde noise project demonstrates a muffled vortex of howling rhythm that actually leaves you wanting more of the same treatment. New Irish record label specialising in limited edition (250 copies of above) is DOT DOT DOT MUSIC. In written prose the trailing three dots suggests an ambiguous pause to be left to reader’s imagination, yet in logo terms the label proposes a striking image of three of its grabbable collectors items lined up in a row.

Yet from Poland we have two extremely surprising objects on the label IMPULSY STETOSKOPU sent by Rafal Kochan in envelope marked PRIORYTET. How amazing to see an official / legit reissue of an album by XX Committee, Scott Foust’s band with Chris Scarpino before Idea Fire Company and Swill Radio occupied the mind and hand of the former. Network (IMPULSY STETOSKOPU 002) is thing with striking red and yellow cover and was recorded 1981-1983 and released on the Thermidor label in the US; rarity of vinyl edition makes this most welcome. Using guitars and electronics, the duo managed a fascinating form of troubling and fear-laden low key grindery, offering a unique strain of USA-grown Industrial music which I think deserves to be more widely heard. Foust has offered snippets on his career-spanning compilation tapes, but here’s their second album in full. (The first, Steel Negro Music, was issued as a cassette in 1982).

The silver thing is in fact wrapped in tinfoil; when I can work out a way to open it without causing too much damage, I’ll let you know. It’s Legnica (IMPULSY STETOSKOPU 003) by Noise-Maker’s Fifes, a Belgian combo of mystery who recorded this at a show in October 1997 when they were touring Poland. I always assumed the Noise-Makers were semi-anonymous along lines of Faust, but name of Geert Feytons does appear familiar from other sources. I only ever heard one record by them but I know their brand of deranged droning has created a large cult following. I suppose a release like this with its unforgettable packaging can only add further fuel to the bonfire of collector’s items! Many thanks to Rafal for sending these; all enquiries to him via impulsystetoskopu@yahoo.com.