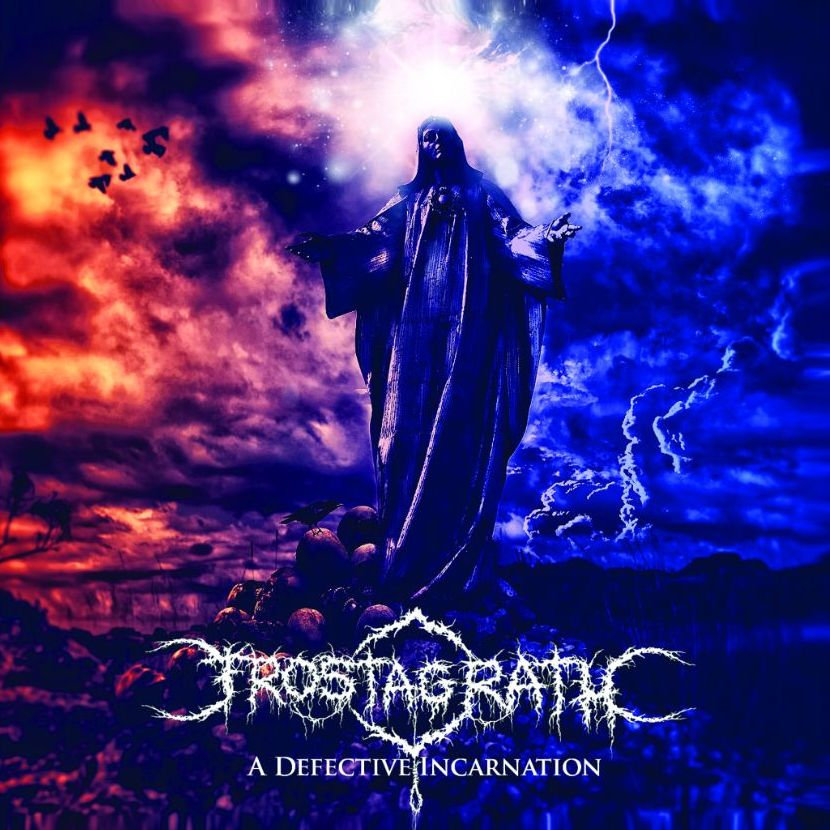 Allow me to introduce you all to Frostagrath, as you may get the wrong ideas about this ambient BM project and the man behind it from the music here. This album, the band’s third since forming in 2011, features very cold and forbidding ambient BM focused heavily on lyrics and singing, and generating an intense emotional atmosphere. You might think that Frostagrath main man Lord Mist lives in some distant part of northern Europe where winters last nine months at least and summer is best described as three weeks of chilly temperatures, wan sunlight and drizzly rain. Our man’s only company would be the local gannet colony, the odd stray polar bear or two, and a pod of whales calling in every six months during their migrations. Well, banish those thoughts because Lord Mist actually lives in Cairo, as in the teeming metropolis of some 20 million souls in that most frigid icy poleof countries … Egypt.

First track “Narben der Erinnerung” may have German-language lyrics, courtesy of a guest vocalist from Germany, but the music is flowing and expressive if perhaps a little subdued compared to the rest of the album. “Forlorn” is a step up with more melody, lead guitar solo breaks and generally a greater development in music composition. Minimal tremolo guitar melodies and riffing on the on hand and synth wash on the other now tend to contrast rather than move in lockstep together to generate tension and unease. The singing is very ghostly and usually involves two voices, one deeper than the other, singing together. The general mood is very resigned and fatalistic, especially near the end with the spoken word lyrics.

The rest of the album follows in similar ways as “Forlorn”: very strongly melodic and emotionally intense songs of hopelessness and despair that feature dramatic and heart-breaking passages of shrill lead guitar solo as the music reaches a climax. Although the music is restricted to the basic combination of guitar, bass, synth percussion and cold synth drone wash (with occasional piano) and rarely strays from minimal melodic BM, it seems a lot richer than it actually is due to the high drama of the raspy singing and the desperately unhappy mood generated by the sounds. Key changes in track 4, “Illusion”, introduce an extra layer of bleakness and emotional depth to the overall package. There may be times perhaps when Lord Mist gets a bit too carried away with all the depressive self-pity and the lead guitar threatens to go on forever, but songs generally stop before the 8-minute mark so that’s some consolation. The final track is an all-instrumental mood piece dominated entirely by lead guitar and a repeating blues-guitar loop.

The album is very good with powerful, expressive and dramatic music and a clear, almost sparkling production. It could have been more powerful with stronger, heavier percussion that might have brought out more aggression but I think many listeners won’t mind the music as it is. “A Defective Incarnation” could serve as the breakout work for this Egyptian act into the wider black metal world where the underground meets the mainstream: Lord Mist’s songwriting and playing skills are top-notch, and the music itself does not need that much improvement apart from a more robust feel. Any room for strengthening the sound will be in minor details such as adding piano or live instruments to embellish the overall presentation.