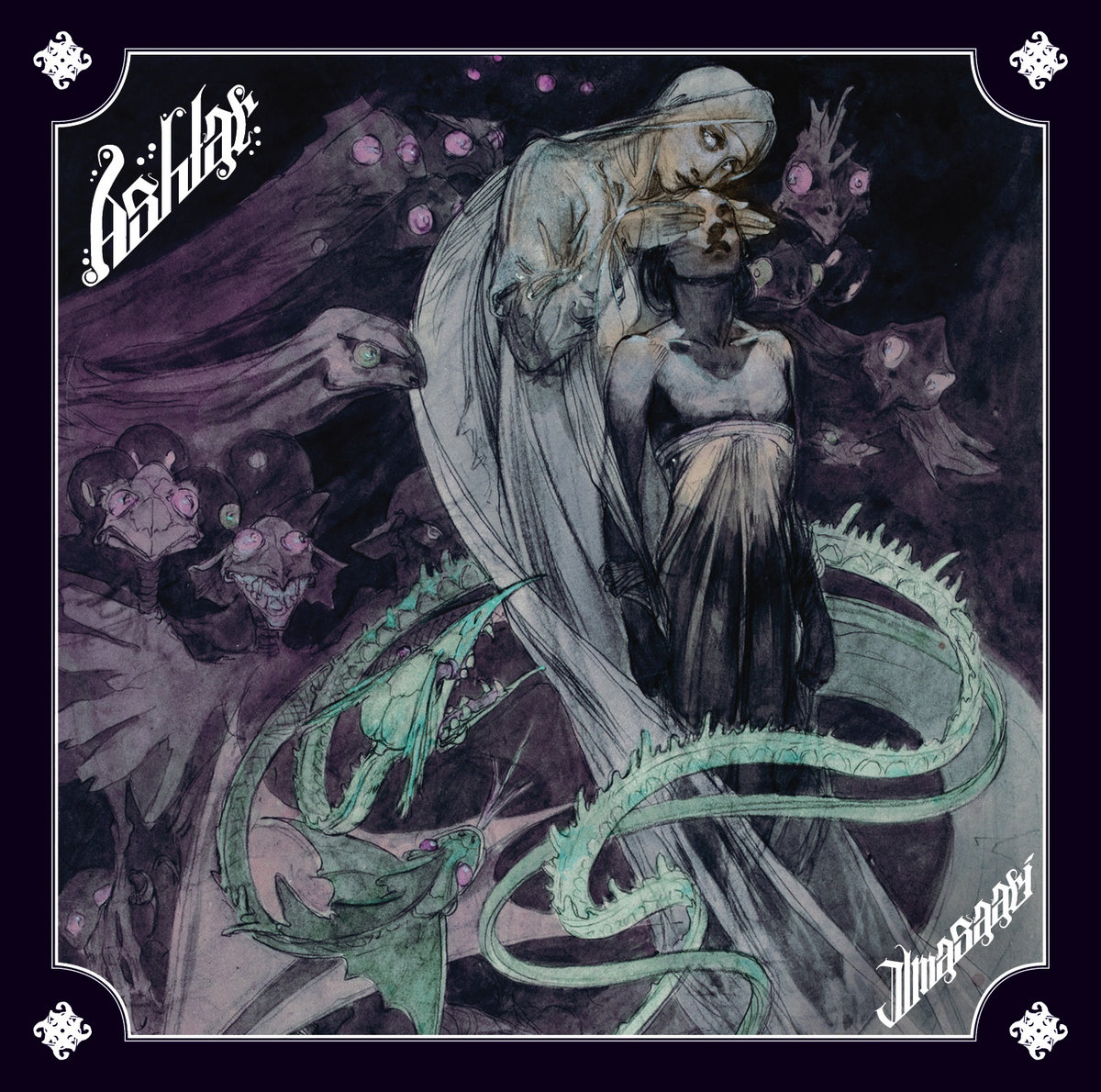 Although the two members of Swiss band Ashtar already knew each other from other bands playing psychedelic stoner rock and doom, a few years were to pass before the duo released their debut recording “Ilmasaari”. The album’s name means “Island of the Skies” in Finnish, and while one Ashtar member Marko Lehtinen is indeed Finnish in origin, the other member Witch N who writes and sings the lyrics isn’t so that might be a relief to those of us (like me) who know nothing of the language. Ashtar play doom / sludge metal mixed with strong black metal and dark ambient influences.

The Ashtar musicians have a confident and robust sound and good songwriting and playing skills in both black and doom metal, all of which are obvious right from the start. I note also the duo’s confidence in switching from doom to black metal and back again in the same song smoothly. Probably the only issue that Ashtar should consider working on is the thin ragged vocals which are easily overwhelmed by the sheer force and power of the music, but it should be said this problem is common to a lot of bands that try to blend black, doom and/or sludge metal elements into one.

The album coasts along for the first couple of tracks without much in the way of surprises but this allows listeners to savour the band’s deep and heavy sound which surges along like a dark strong undercurrent. Doom metal has that capacity to just stream along, riffs repeating over and over and doing little else, and still hold you spellbound with its thick sonic textures. It’s not until “Celestial” that the mood changes to something more blackened and foreboding and making this listener feel a bit sick in the stomach. Don’t worry, I’m reviewing this on a half-empty tummy. Cold tinny piano melodies, riffs that swing from swanky rhythm to jagged booms, a changing pace and catchy pop tunes make this song an early standout. I only wish the singing had been clearer and better than the raspy screaming that hangs on the foghorn drone guitar booms.

“Moon” is a straightforward sludge trawl with some rock groove passages while “These Nights Will Shine On” is a creditable blackened doom song with good instrumental passages of brittle tremolo guitar riffing or booming bass-heavy drone and bursts of blastbeat drumming. The song is layered with more and more instrumentation and a lot of vocals although the voices can be hard to hear. “Collide” features acoustic instrumentation (mainly violin) for a doleful atmosphere that leads into a strong doom sludge song that in parts edges towards psychedelia with a howling wall-of-sound guitar solo.

Without doubt, “Celestial” and “Collide” are the best tracks for their variety and difference from the other songs which mostly stick close to melodic blackened doom. The whole album is very solid and shows care and thought in its making. Listeners might treat the vocals as strictly secondary to the music and adding just another layer of texture. Perhaps the real achievement here is how Ashtar manages to sound like a full band all playing together rather than two musicians playing several instruments and then fusing their efforts together.