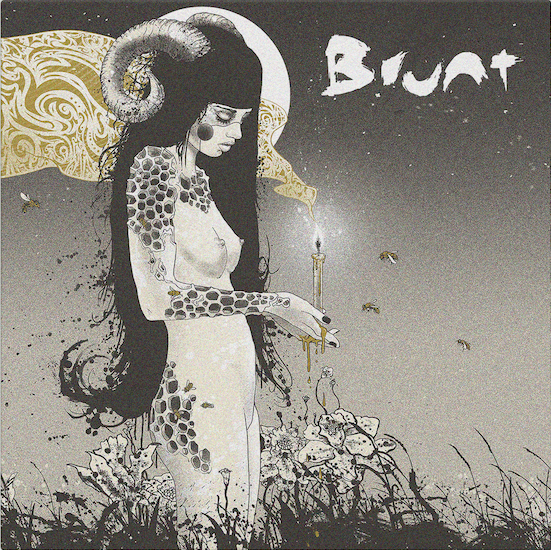 Since I heard this Channel Islands doom stoner trio’s “Blackbeard” EP, I’ve been looking for other stuff of theirs and found this self-titled album. Most tracks on the album are sprawling instrumental pieces of riff-dominated mood psychedelic doom sludge fusion and the fun starts right away with an extended sonorous drone tone riff, around which percussion weaves a constantly changing beat and rhythm structure, on the first half of “St Felix of Nola” – the second half being a more brooding wander in dark murky space out of which emerge a drum beat loop and then a whining steel-edged rhythm guitar churn topped with an oily high-pitched wobble lead guitar solo. We’re in for a very interesting ride through fields and valleys of atmospheric psych doom stoner melange if this first track is any guide.

With its distinctively playful rhythm loops, “The Tale of the Hideous Tricorn” sounds almost tongue-in-cheek though the lyrics about the origin of Satan and humanity might possibly be more serious than they read. Whatever you think of the lyrics, the music certainly is an enjoyable ride with long lead guitar improvisations and bouncy percussion. “Rabbit of Cannabong” – for a moment I thought this might be a homage to the killer bunny in that old Monty Python flick about King Arthur and his knights in search of the Holy Grail – is just as good to listen to, mixing a smart-n-sassy rhythm section run with a slower, more concrete-slab passage of booming bass and hard-slapping drumwork. The bass work-outs here might just be the best parts of the song, which is really saying something as the whole track smoulders with crunch and crumble guitar textures.

The album gets better and better with “A Concise Cosmic History Of The Swob Monster Pt1 (The Birth Of Fuzz)” which elbows everything that’s gone before with spiky angular riffs that continue to elaborate throughout the track. There’s more of that molten-lava lead guitar attack before the whole piece morphs into a huge doom sluggernaut monster making its sedate way down the Milky Way.

All tracks are well composed and tend to consist of two sometimes very different parts with the second part a bit slower and heavier than the first. There’s an emphasis on a few distinct riffs repeating over and over on tracks and I suppose as long as they’re fairly short they won’t be too monotonous for most listeners. The songs probably could be a bit longer and feature more variation and development of melodies and riffs than they do. Most tracks suffer a little from not having a vocalist (even if that vocalist does nothing more than howl or chant nonsense gibberish) and a couple of lines of poetry. While the clean production gives the music a very contemporary sound and all instruments can be heard (and enjoyed) clearly, at the same time the music gives the impression of being a bit flat and almost one-dimensional, and needing an extra layer of sound to give it depth.

Even so, with all its faults this self-titled album is a great way to become acquainted with psych doom fusion music and Brunt in particular.