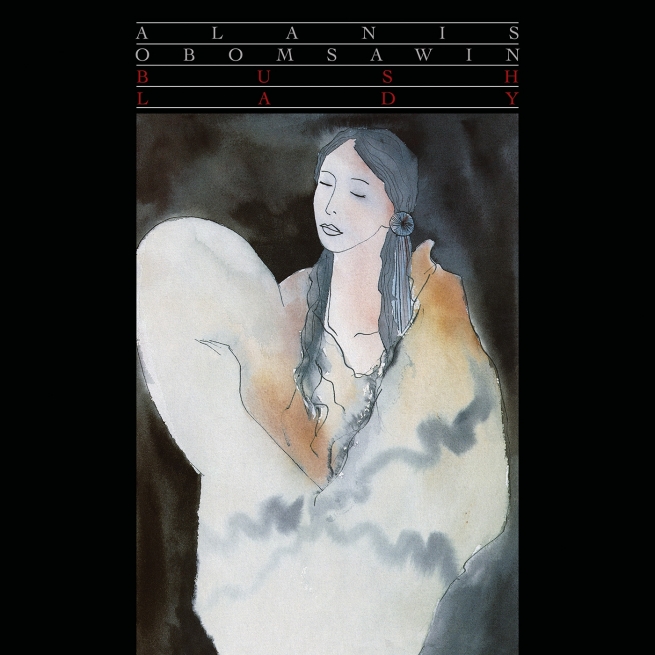 Better known as a documentary film maker with a focus on the lives and concerns of Canada’s aboriginals, Alanis Obomsawin originally began as a singer-songwriter in the 1960s as part of a generation of indigenous artists across North America asserting their and their peoples’ political rights and cultural awakening, and confronting majority Western societies with their colonial histories and appalling treatment of aboriginal peoples. Alternating between singing and performing on the one hand, and filming on the other, Obomsawin recorded her only album “Bush Lady” in the late 1980s and released it herself in 1988. Thirty years later, the album has now been reissued on CD by Constellation Records.

Even after thirty years, the album still sounds very fresh and striking in its stark and understated presentation. An eclectic musical accompaniment of melancholy violin, brooding cello, haunting oboe and plaintive flute are all that follow Obomsawin’s vocal, full of wistful yearning and wanting to understand, and what a marvellous line-up this turns out to be, illuminating and drawing out the pain of personal histories and of the exploitation of Obomsawin’s Abenaki people, the theft of their lands and the destruction of their culture. The hypnotic title track tells of the abuse of Abenaki women by white men and white culture, and the rejection of these women and their hybrid offspring by their people, though the laconic nature of the lyrics suggests the song could also be read as the exploitation of Abenaki people in general, caught between their culture degraded by contact with the worst of European culture and European culture itself which doesn’t want them.

On most songs, Obomsawin’s singing carries the melody while the instruments provide the emotion and atmosphere, and the monotonous gentle thudding of the tribal drum exercises a seductive, mesmerising influence on the listener. The songs often have the quality of lullabies, especially when Obomsawin starts to croon and hum. While the lyrics often express pain and degradation, they can also offer hope and comfort – though that hope and comfort may come from a dark place. The album revolves around the title track and its minor second part, and a pair of two tracks “Theo Pt 1” and “Theo Pt 2” sung in French to the accompaniment of drum and woodwinds. Obomsawin’s vocal style would be considered avant-garde in most other musical genres, jumping from recitation to startling tribal chant and croon at the lower extreme of her vocal range (some of which appears to imitate the howling of wolves) and back to recitation as if nothing happened.

In spite of the pain, melancholy and emotion present on most tracks, this album is a beautiful and remarkable recording, unique in style and not likely to be matched for power, emotion and sheer alien quality.