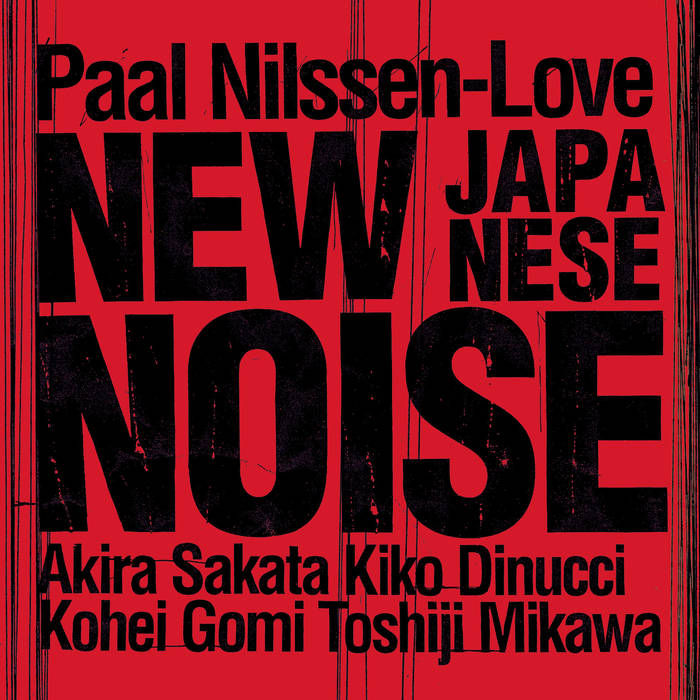 Celebrating US Independence Day at the Roskilde music festival in Copenhagen last year, drummer Paal Nilssen-Love assembled a tag team of Japanese improv jazz players including long-time stalwart in the Japanese scene Akira Sakata on clarinet, saxophone and vocals. PNL himself takes up percussion duties, Kiko Dinucci from Brazil straps on electric guitar and early 1990s noise pioneers Kohei Gomi and Toshiji Mikawa are both on electronics. Altogether this fearsome fivesome churn up five tracks of noisy stuttery improv jazz-noise, all of which don’t sound very much different from one another and all going hell-4-leather bat-shit crazy. Listeners have the option of hearing the entire album from start to finish as one continuous track if they’re feeling very brave, or following the track listing and hearing each track separately if their courage fails them.

On opening track “Stiff Upper Lip Jeeves”, everyone is fighting for attention but Sakata dominates by sheer force of his stammering sax, at least until the last few moments when Gomi and Mikama come to the fore with their sputtering electronics. “Up to the Line to Death” is a bit more relaxed though Sakata insists on going his own way with PNL and Dinucci gamely following him and PNL at least making himself heard behind the bubbly sax. After the halfway point, Dinucci and the electro-noisicians seize their chance and take over the track. “Eats, Shites and Leaves” is a surprisingly minimal and playful piece with just Sakata warbling away on his clarinet for the first few minutes while PNL lurks in the background with delicate cymbal work. The second half of the track; features cute electronic pyrotechnics that become ever more frenzied and deranged while Sakata still indulges himself on the clarinet.

“The Bone People” features crazed bloodcurdling vocal mutterings and rantings from Sakata who makes out that he’s in some horror Japanese samurai ghost story with lashings of blood and gore. There’s some excellent rhythm work from PNL and Dinucci while Gomi and Mikawa doodle in the background. For a lot of people, this is going to be the most distinctive and the best track for Sakata’s cartoony vocal delivery. Pity though that the electro-noisicians, for some reason, don’t challenge Sakata for crazed wackiness when the spotlight turns onto them. The musicians save their best and craziest work for the last track “Birdsong”, a brief blast of manic improv jazz on a train-ride at 150 km/h with no brakes.

It’s certainly an energetic and manic ride through noisy improv jazz-electronics experimentation but I rather think that there are too many occasions where Gomi and Mikawa might be a bit too deferential to Sakata and PNL, and don’t get the chance to show what they can do and how their flippy quicksilver electronics support and complement the other musicians. The noise jazz certainly dominates here.