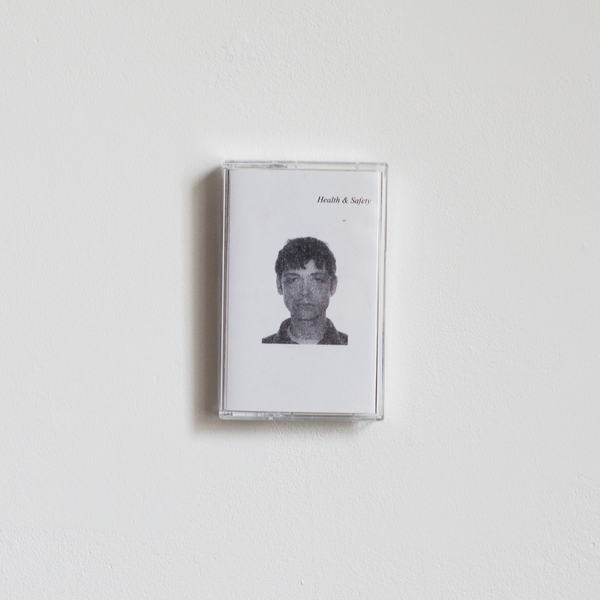 Awww – such a woeful expression on that guy’s face on the front sleeve cover of this cassette, that most people would give this cassette a spin or two to find out how sad the music must be and to commiserate with the fellow. The portrait is of Johan Suurballe Wieth, the man behind Health & Safety: Wieth is a Danish musician who so far is best known as guitarist for Copenhagen-based punk rock band Iceage. Here on H&S’s sole self-titled album, Wieth turns his attention to turning out darkly solemn ambient instrumental music – music so mournful and depressive, it’s sure to put your mind in a black cloudy fug. With titles like “Circadine”, “Sertraline” and “Paroxetine” – all named after a sleep medication and two anti-depressants respectively – that could well be the intention: to give listeners a taste of what depression must be like to experience. (I have been in that mental territory myself and I can tell you, the music does come very close to replicating the experience.)

The album is not long but the music is slow and minimal enough, with vast dark spaces within, that it seems much, much longer than it really is. The quivering guitars, edged with reverb, combined with toy-like sparkle, draw you into a deep and giant universe of apparent sheer emptiness. The deep-space ambience grows and deepens slowly through long elongated drone layers of trilling guitars, reverb and ghostly effects. Nearly halfway through the recording, other instruments appear: a furiously rubbing violin, a doleful piano and various background sounds suggestive of deteriorating factory ambience come and go. The last ten minutes of the cassette are the most varied and interesting, as other instruments join in weaving an all-enveloping yet fragile sound net of deep emotion and melancholy.

It’s certainly not an album for most people to hear, and even those whose tastes incline towards dark ambient, post-industrial or post-apocalyptic music may find parts of this recording hard to bear at times. If you can persist with it though, you will find moments of unexpected emotional release and outpourings of intensely raw and powerful sound. Above all, this is an album of towering dark beauty.