Slow their music may be … but once the Slomatics get going, they just don’t stop … “Canyons” is the Irish band’s sixth album in a 15-year career. My first impression on hearing this album for the first time is that something has definitely changed in the music: vocalist / drummer Marty is now singing more than shouting and his voice seems clearer and cleaner than what I remember. While it’s still a heavy sludge-doom album, “Canyons” is less bludgeoning than previous full-length recordings, as though the band might be softening its approach. Trippy psychedelia and Gothic elements are popping up in songs, and am I imagining that a mini-soundtrack concept is present in parts of the album as well?

Opening track “Gears of Despair” is business-as-usual with glacially paced rhythms and riffs, a monstrous subterranean grinding bass sound, and Marty singing near the top of his vocal range in the far distance … but this time key changes introduce a Gothic element that is new to the band’s sonic palette and ghostly choirs now sigh in the background. The song plods steadily and relentlessly to its climax. Likewise “Cosmic Guilt” is typically straightforward Slomatics trundle, at least until most of the lyrics are out of the way and a brief instrumental passage allows ambient electronic effects to take over and launch the music into another space-time dimension. A short all-instrumental piece of epic psychedelic doom / space opera rock offers a glimpse at a potentially bombastic side of the Belfast-based bruisers.

“Telemachus, My Son” – the title is a reference to ancient Greek poet Homer’s The Odyssey, and suggests a farewell from someone about to go on a journey – is a gargantuan chugging song of easy-going melodic doom / stoner / space rock with spacey atmospheric effects and dark acoustic instrumental embellishments. While this is one of the longer songs on the album, it never feels drawn-out at all: there’s a fair amount happening with the changing riffs, rhythms and beats, the reverb on the singing adds an otherworldly depth, and keyboards, while used very sparingly, enhance the exo-planetary feel. “Beyond the Canopy” almost seems about to collapse through its playing time, with huge spaces in the music through which anything and everything becomes possible, and darkly acoustic guitar melody accompanied by discreet space ambient effects in one such space proves this. Spaceships soon start landing and taking off with hostages as the impassive music ploughs its way through alien dimensions. 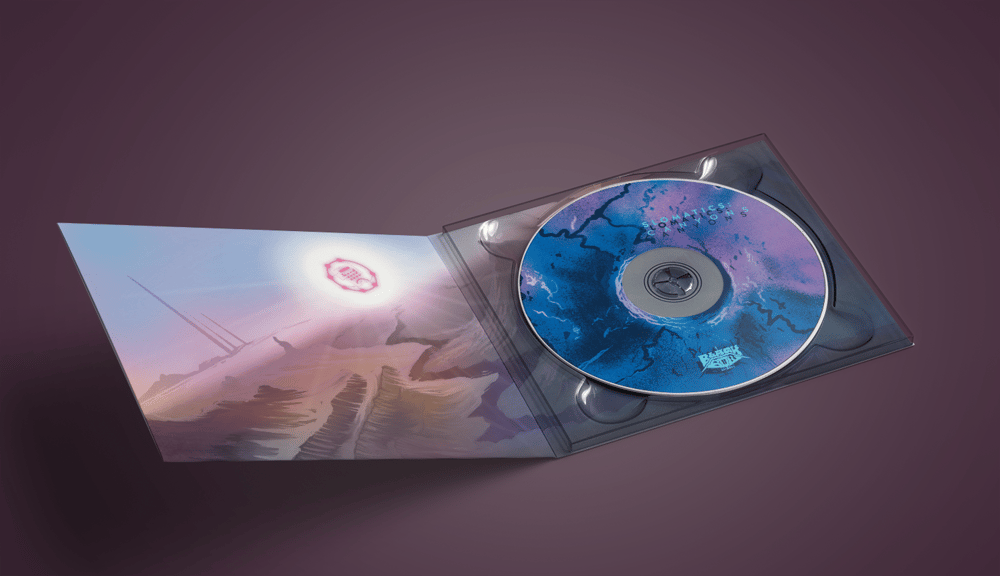 The last three tracks form a set all their own and have a lighter sound. (So I wasn’t imagining the mini-soundtrack idea after all!) “Arms of the Sun” is another short all-instrumental piece, done entirely on keyboards, leading into “Mind Fortresses on Theia”. This is not quite so heavy as previous tracks and more emphasis is placed on Marty’s singing, but for all its epic majesty the song seems to flounder and never quite reaches a climax or resolution. The synthesiser work on this song replicates the strings section of an orchestra and seems out of place on an album with strong science fiction themes. The final track returns to the band’s familiar sludge-doom style, this time with treated Sabbath-style vocals. Again though, the song wanders through orchestral synth territory and hovering UFO ambience, and just putters out.

What a shame … “Canyons” promised so much with tantalising suggestions of a new direction, melding humongous miasma slug sludge doom with space ambient psychedelia, only to get bogged down in its ambitions and sometimes straying too far from the band’s comfort zone. Some tracks like the earlier “Gears of Despair” and “Telemachus, My Son” are standouts in getting the balance right with massively heavy grinding doom, keyboard accompaniment and space ambience / psychedelia elements. On other tracks though, problems in song composition and experimentation in song structures come to the fore. Even with its faults, “Canyons” can still boast moments of Slomatics sludge greatness … just not all the way through as fans might have come to expect.