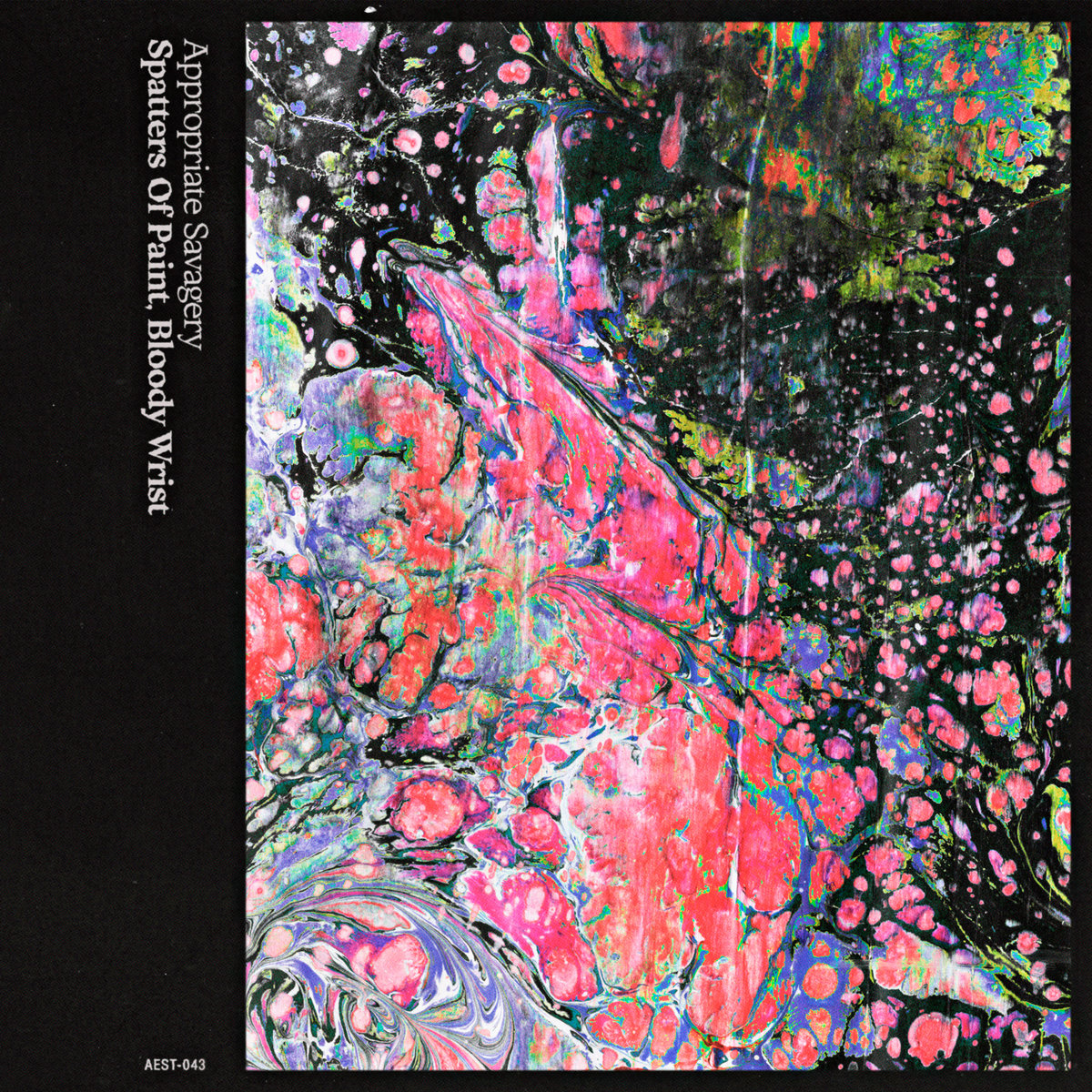 Active since 2017 at least, when the first recordings were released, Appropriate Savagery is the industrial ambient noise project of David Lacroix, a resident in Montpellier in France. “Spatters of Paint, Bloody Wrist” is Appropriate Savagery’s fourth album, released as a double cassette set on the Perfect Aesthetics label. Mixing field recordings of urban landscape background noise, shimmery atmospheric drone and wash, silvery effects and gritty noise lite, the album brings out a highly immersive universe of initially soothing and softly radiant sound environments that may collapse into more raw and abrasive worlds, which themselves revert back into the safety and security of the previous music. This zigzag interplay is apparent throughout the recording. In this constant to-ing and fro-ing, individual humans might reach out to connect, to bond with one another, though it seems their efforts are hit and miss, and mutual understanding is just barely out of reach.

Most pieces are short but encapsulate within their dimensions a very lush layered world of often beautiful sounds, though some can be sharp-edged and quite gritty. You can easily fool yourself thinking there are more sounds in the recording than there actually are; the atmosphere seems quite dark and dense with a lot of air humidity in parts. Jagged shards of noise can penetrate the dark insular atmosphere and bring a highly deranged feel to the wandering music. The title track itself verges on power electronics with its jagged textures that are high-pitched scratchy and heavy at the same time, behind which a mournful droning tune develops and eventually dominates the track with its air of longing. Yet the noise threatens to usurp the apparent serenity of the piece.

A nostalgic feeling is present in several tracks though it is never in danger of becoming cloying: the harder sounds and rhythms stop the music from becoming sentimental. Tracks tend to be repetitive and seem concerned to paint a picture, and perhaps paint it over and over, rather than take listeners on extended journeys. Field recordings are usually easy to recognise as rain or voices in conversation deep within the track among other things. Songs build up tension and a sense of journey leading to a climax by growing louder and adding effects and instruments.

He may not be reinventing the wheel but Lacroix demonstrates a deft hand in controlling his box of special effects tricks and placing them into the music in such a way that they seem to have always been in their particular tracks and to show no signs of having been sewn in. Later tracks may have a dark and foreboding air of impending rain in a public square. Penultimate track “Open Wounds, Artificial Enemies” has an especially gloomy outlook with solo piano and a mechanical rhythm. There seems to be so much featured on this album that on realising the album is less than an hour long, I thought my brain was playing tricks on me.

The album title may be alarming but there’s no need to fear that the music will be violent: it is often very dreamy, but it is just as likely that the serenity and radiance will quickly be joined and replaced by harsh soundscapes.