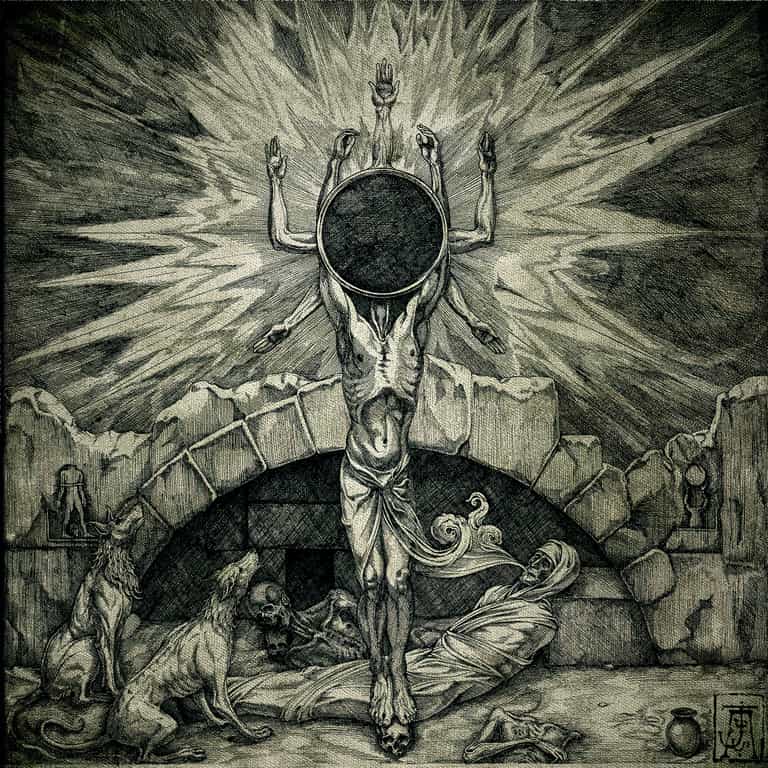 Just when you think the French and the Spanish had cornered this style of dissonant occult blackened death metal with the interrogation of Christianity and Western philosophy through a prism of Satanic rebellion and finding nought but rotten corruption at the base, along comes this Norwegian act. Led by vocalist Skard who also plays all instruments except percussion, Tragediens Trone formed in 2007, released one demo, and then stayed quiet until this year when (after bumping up its membership from one to two) it released its debut self-titled album.

The album starts impressively with the obligatory cavernous coldspace ambient drone introduction, the spidery guitar tone starts to rev up and then all acid-shower hell starts pouring down upon us. Skard’s tortured vocals, cursing and crying all at the same time, dominates the songs: he has an impressive range even with a voice that must have been roughened up with daily early morning gargling of battery acid in his glass of water. A veritable phalanx of layer upon layer of raw corrosion tremolo guitars constantly rains down our heads. The percussion is perhaps a little too fast and flippy, and not really beefy and muscular enough, for the music to make the maximum impact it should; it needs more solo lead guitar or another solo instrument (I’m thinking harp might actually suit the music) to add strangeness and complexity. The drumming also needs to be more complex than what its time-keeping function enables. The result is that the music depends very much on Skard’s vocals to carry it all the way through; even with the remarkable range he has, his vocals are just not enough to hold the listener’s attention. For all the anguished howls and deranged ranting, his singing does little that vocalists on other BM recordings of the cold and esoteric ancient Satanic catacomb temple style haven’t already covered. Ordinary songs with few distinct melodies, a lot of dense repetitive riffing, and a habit of ending by suddenly dropping off a cliff into nothingness don’t help either.

Despite its flaws, the album overflows with aggression, energy, sombre atmosphere and gritty acid-guitar noise power. The songs could be recast as chapters in a meta-work covering the whole album and maybe even extending to the next album and the next: this would strengthen the band’s concept and its themes, and the fact that the songs don’t differ greatly from one another would be less of a problem. With a strong concept and supporting themes, the songwriting and the lyrics would become a lot more inspired and give Skard opportunities to really stretch his vocal talents. The foundation for a terrifying and awe-inspiring Satanic occult blackened death metal band with near-operatic singing and a dense style drawing heavily on dissonant tones is present; a few tweaks to the package and Tragediens Trone could achieve lift-off into more heady heights (or depths, as the case may be) of the underworld the band inhabits.