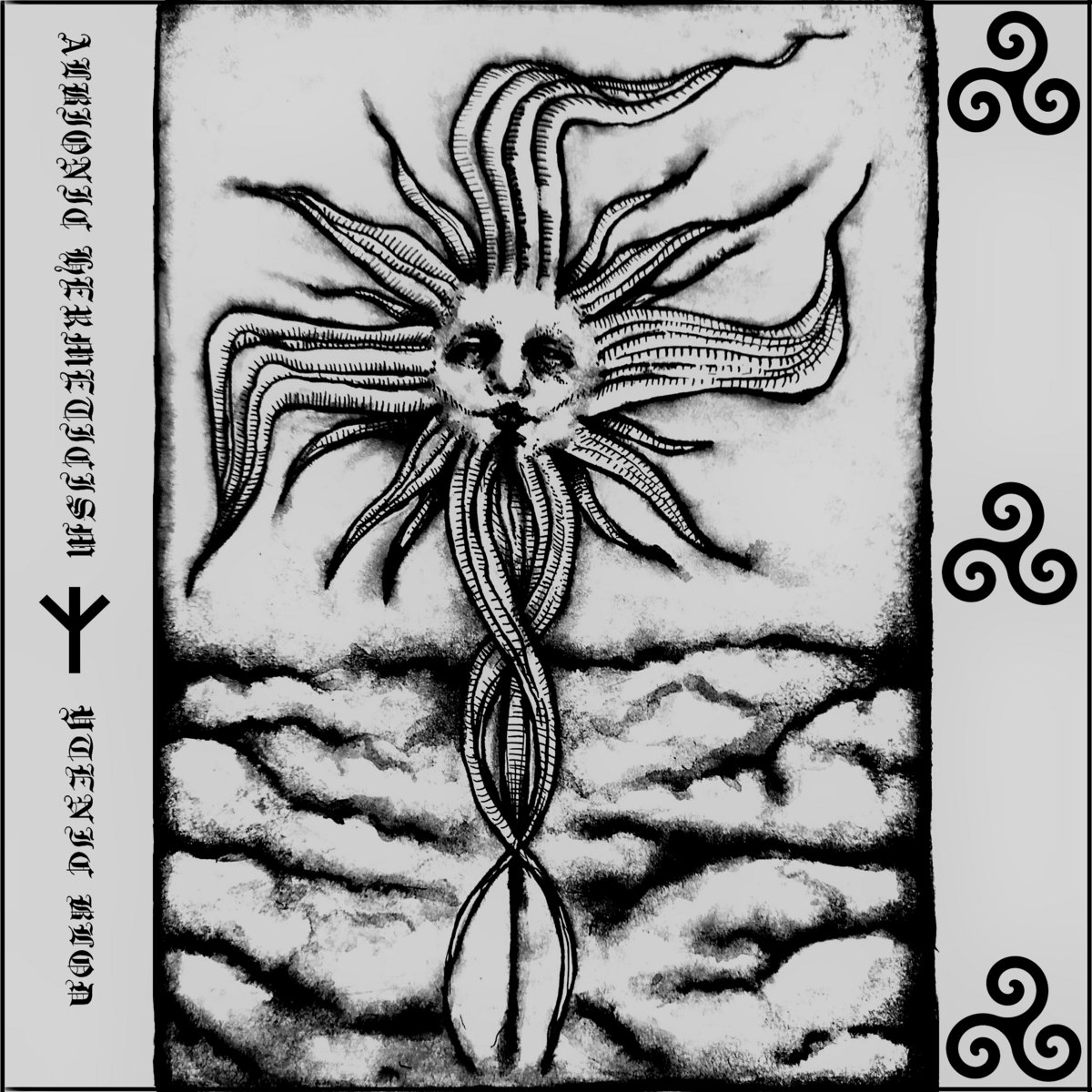 Part of a British-based black metal collective known as The Aryan Hermetic Order – this group dissociates itself from National Socialist Black Metal – one-man band Albionic Hermeticism plays a style of occult atmospheric raw BM with themes embracing Ancient Egyptian gods and their worship, northern European pagan rituals and a worldview and approach influenced by Hermeticist ideas and philosophy. “Ytenic Blód” is the project’s second album, the first “Ancient Hermetic Purity” having been released in 2018. At this time of writing a limited edition of 25 cassette copies had been made by sole member O.W.G.A. with any further copies to be made on request.

The music across the album is diverse, mixing darkly occult ambient raw BM with noise and industrial elements. The first track “Sinister Moonliht Wanderings” (sic) sounds like fairly typical dark esoteric Satanic catacomb BM with that cavernous feel and the cold, dry internal-mausoleum airy quality, the roaring anguished guttural vocal from somewhere deep in the labyrinthine depths of Hades, and the scourging BM guitars combined with a clear production that gives a crisp jewel-like tone to the instruments. Cut to the title track and we get something completely different: a power electronics introduction to a slow black / doom song with a mix of sung and spoken lyrics, and more noise effects in the background. Subsequent songs aren’t quite so alarming and the music is balanced between raw melodic BM, elements of symphonic BM, dark ambient, garage punk, a bit of thrash and more splats of power electronics noise. Most songs are very strongly riff-based which can be both a plus and a minus: the riffs give songs their own identity but at the same time they can be a bit monotonous and lumbering when the music is slow. As the songs are not especially long, they end up sounding like extended introductions that go nowhere. The most interesting tracks are a short ambient interlude “Guided Meditation on the Peaks”, a quiet sonorous instrumental, and the last track “Þéawfæstnes” which has a squiggly guitar tremolo layer embedded in its spine that transforms into an ominously dark jangly melodic flourish in a brief instrumental solo.

I’m a bit sorry that the more experimental tendencies didn’t carry through the entire album and some of the melodic synthesiser work seemed a little stale and tired. There is a strong distinct sound that has a sinister crystalline edge. At this early stage in Albionic Hermeticism’s career, the songs have a very structured form; on later recordings, a more fluid and experimental style of composition, with as much emphasis on improvisation as on a strong structure based on repeated riffing, would be welcome. More variety is needed in the vocal range and singing, and I think with this style of music and the themes O.W.G.A. is interested in, chanting and poetic recitation would help here.

At the time I was writing this review, the United Kingdom was at the brink of making a most momentous collective decision as to whether to continue being a failed and dysfunctional puppet state of a vicious transnational elite or to seize a new beginning and start on a revitalisation of its culture and institutions, and a rediscovery of its roots and traditions as an inclusive British society. In their own way, Albionic Hermeticism and like-minded bands beavering away in their corners of this scepter’d isle are lighting the path to a new world.