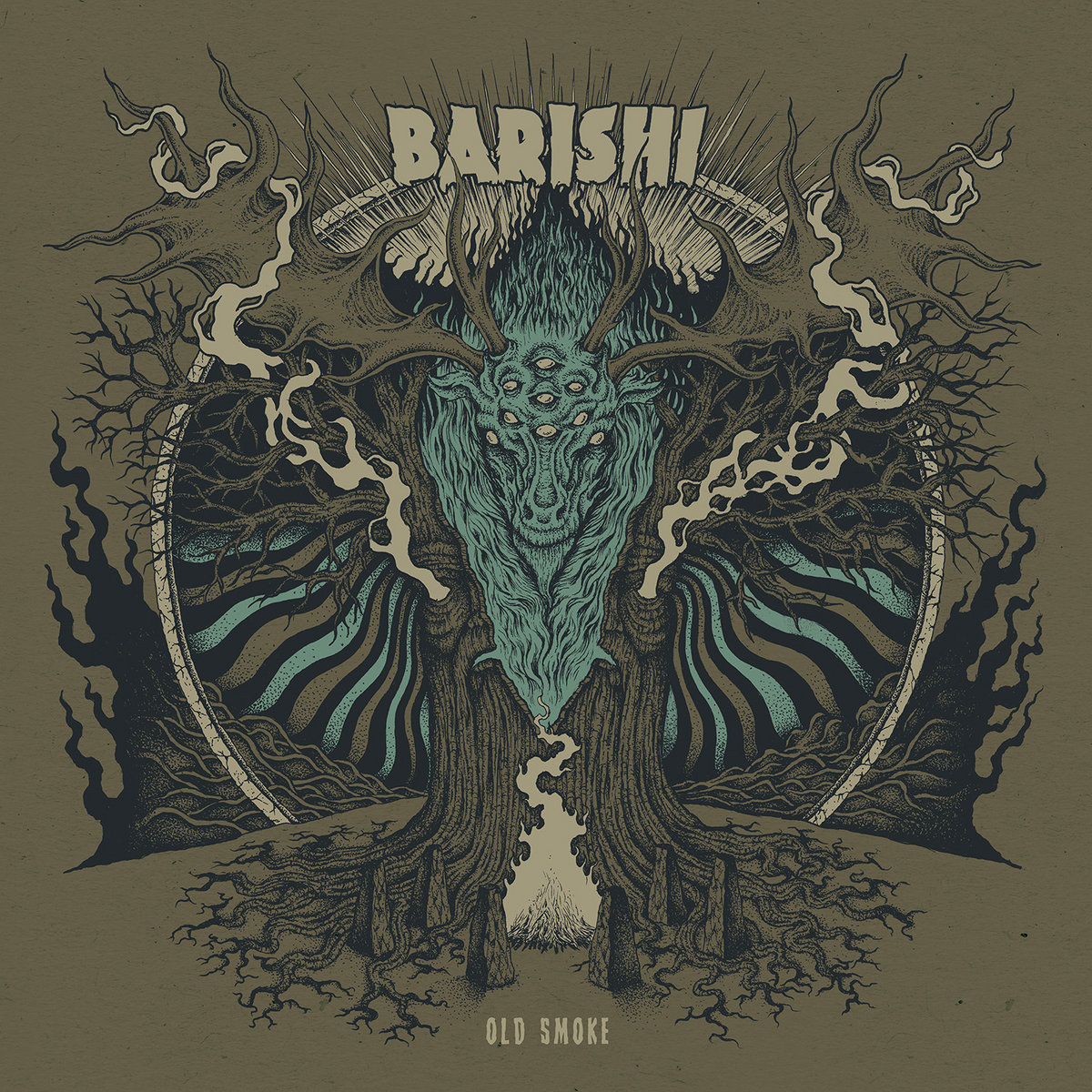 I must confess this was a case where the album front cover caught my attention and I’m not sure why because as you can see it’s not particularly pretty or cartoonish or lacking in any sort of artistic taste. Barishi is a three-piece sludge metal band with black, death and progressive influences based in Vermont in the United States’ New England region, although originally the band started out as a quartet and only became a trio when the original vocalist left after the band had already recorded two albums. This current release, “Old Smoke”, is Barishi’s third recording so in a sense it’s a first album for the guys in their current line-up with lead / rhythm guitarist Graham Brooks taking over vocalist duties.

Opening track “The Silent Circle” is very strong and confident in its delivery and any uncertainty over Brooks taking on more than his fair share of the work is dispelled immediately: his gruff blackened death metal vocals, edged in New England winter cold, are assured and hold their own very well against the band’s dense musical arrangements and tight precise playing. A very clear and professional production enhances the music which with a few deft changes of key expands enormously into highly atmospheric, almost dream-like worlds outside our own. While the song is long, the band’s playing is very focused and restrained, concentrating on a rhythm and set of riffs that are consistent throughout yet allowing for changes throughout the track that ensure the whole song is never boring. Next up, “Blood Aurora” involves an even bolder vocal approach from Brooks, trying on both death and black metal vocal styles and not doing badly at all: from now on, the challenge must be which style he prefers and whether it suits the song and its nature-based lyrical content (which includes references to cannibalism and the ill-fated Donner Party migration in California over winter in 1846-7 on one track “The Longhunter”). As on the first song, the music relies on precision playing and a disciplined attitude, this time with lead guitar solo, chunky riffs and some powerful tom-tom thunder in parts.

While the long tracks are taken up with a highly technical style of playing, showcasing the musicians’ ability to work together at a fast pace and to build up a dense style of music, the short tracks demonstrate the musicians’ ability to delve into and experiment with other styles of music: “Cursus Ablaze” is a beautiful ambient instrumental piece dominated by acoustic guitar full of the wonder of the vast natural environments to be found still in the US; and “The Longhunter” and “Entombed in Gold Forever” have strong grooves with strong death metal influences and structures.

If they still have any surprises, Barishi unleash them on the title track, mixing atmospheric progressive rock, folk and black metal together in a looser though no less meticulously performed style. The music seems more expansive and at the same time introspective, and in its meanderings there is a strong sense of a journey being undertaken resulting in self-discovery or a personal revelation.

While the album probably could have done with a wider range of sounds and atmospheres to make the songs more individual, and Brooks probably needs to settle on one particular vocal style and stick to it, and develop an emotional range with it – listeners quickly figure that his black metal style is all aggression and not much else, and other vocal styles deal with other moods – my impression is that “Old Smoke” represents a new direction for Barishi and is the culmination of a great deal of careful thought and hard work in refining the band’s style and direction. The energy on the album is controlled and channelled into a slow steady burner brimming with passion and soul. It deserves a wide audience and might very well be a sleeper classic of its kind.