“Lemegeton Party” is the debut album from new-ish Italian super-group trio of whom Alice Kundalini (of She Spreads Sorrow) on breathy vocals, electronics noise composer Luca Sigurtà and Daniele Delogu from the Barbarian Pipe Band may already be known to TSP readers in their own capacities. Kundalini / She Spreads Sorrow at least I know but the other two musicians are new to me; nevertheless they all have their distinct styles which complement and contrast very strongly. Kundalini’s coy whispered vocals, more usually detailing psychosexual repression and abuse, here address issues of power and strength with the implication of their potential for abuse and enslavement of the weak by the strong. The noisy electronics are covered in a sheen that renders them decadent and way past their prime, as if to suggest that the power relationships alluded to on this album exist as much out of inertia born out of custom and tradition whose origins have long been forgotten. 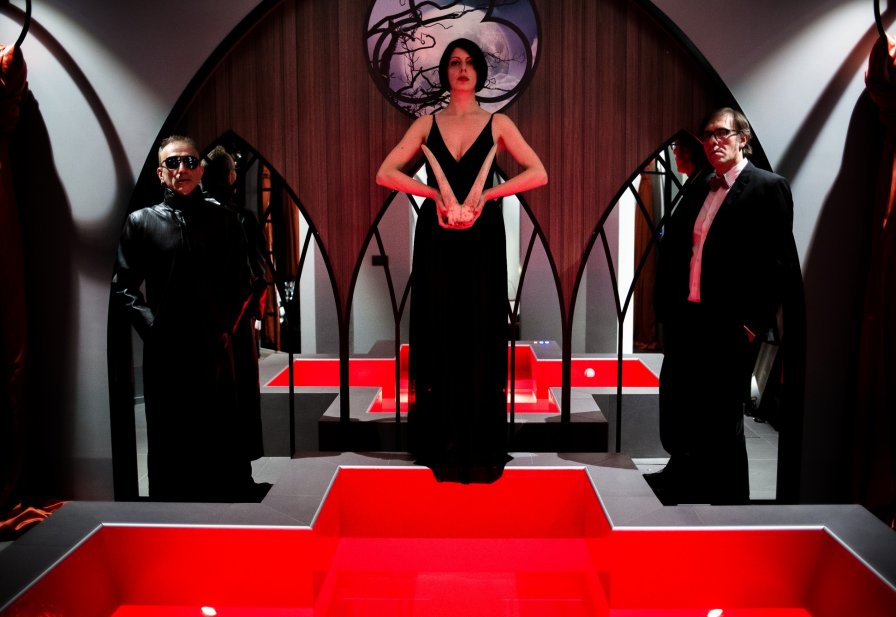 The music is sparse in style which highlights Kundalini’s voice and calls attention to the dark spaces that surround her vocals, the ripple tones, Delogu’s acoustic folk instruments and the drum machine rhythms. While the songs are not long and their sparse delivery might lead listeners to think they’re easy to assimilate, Kundalini’s breathy voice and the production treatment give the music a lush quality that lead listeners to suspect there may be much more happening under the surface than there actually is. Whether Kundalini seems to be an ingenue or artfully leading listeners astray, hiding a predatory nature behind a façade of supplication, is up to listeners to judge.

Of the five songs on offer, “Restless Youth” perhaps best demonstrates Junkie Flamingos’ potential as purveyors of pop songs performed in an ambient dark industrial music style, with the music growing and developing steadily and menacingly into a monstrous entity of which we hear and sense just a small part, the rest of it shrouded in dark moving shadows. The other songs are all very good though the electronics and acoustic folk contributions are very restrained and slimmed down to their essentials. Perhaps on future albums Junkie Flamingos will reveal what they’re really made of; for now, they’re lying low, giving us an early warning, and preparing to strike, and strike hard, when they’re ready.