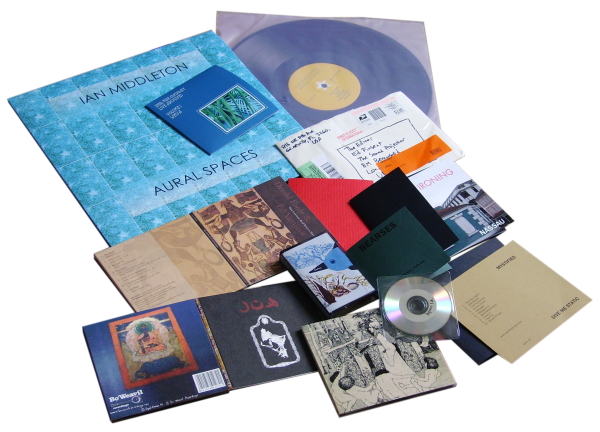 Micro-label Hymns operates from Gainesville in Florida, apparently specialising in process-based ambient noise music of many kinds. Give Me Static (hymn 25) is the urgent plea of Mystified, who provides ten reasonably interesting cuts of droning loop sounds, mostly quite gentle and unobtrusive, although he does manage to get briefly agitated with ‘Disappear 3’. Ironing (i.e. Andrew Chadwick) offers a rather unusual project with Nassau (hymn 27), which he recorded while on board a cruise ship and in the Bahamas; his mixture of microcassette recordings and radio bursts produce a clotted sound we cannot help but describe as “seasick”. Jolly crowds and flashes of lively Bahamian pop music are rendered into something vaguely nightmarish and inhuman, through the highly distortive processes, which include tape speed variations, static, layering and playback through a tin can with a one-inch speaker. Bearses (a defunct collaboration between Chadwick and Troy Turriate) have a release The Prettiest Girl I ever Saw (hymn 12), a three-incher whereon the various tapework, turntable and radio bricolage was recorded live. Like the other two releases above, this one sounds cramped, suffering somewhat from a certain limitation in its overall sound range, but it has moments where the overfed noisy combinations work well and produce the intended sensations of alienation and exile. Some care has been taken over the card wallets and packages of these releases, which remain uncluttered and free from unnecessary typography.

Uncle Woody Sullender performed live at the Künstlerhäuser Worpswede in Germany last year, and the new CD Live At Barkenhoof (DEAD CEO DCEO008 CD) documents some of the results. We’ve got a lot of time for this Chicago-based improviser who plays the banjo in ways that combine traditional bluegrass styles with free improvisation techniques, and who muddies up his sound in interesting ways with live electronic distortion. His previous CDs have been packed with furious playing, as though his picking fingers were glowing with atomic radiation due to having consumed an entire gramme of plutonium, but these live recordings are much more measured and confident. Judging by photo, the boot-wearing player was bathed in a warm orange light and aided by a glass of wine at his elbow plus a Mac Powerbook to produce some of the gentle ambient drones to accompany his banjo. What we hear is masses of inventive and sustained playing that will appeal mightily to any listeners who recently discovered the amazing Robbie Basho CD on Bo’Weavil Recordings. ‘Violence of Völk’ is particularly impressive; the musical phrases just seem to pour out of him, like an intelligent conversationalist armed with many an arresting anecdote from his unusual life. Sullender is carving out a unique niche, delivering an intelligent and skilled update on American folk forms.

Speaking of Bo’Weavil Recordings, here’s two of their new CDs giving ample evidence of their all-embracing approach to folk, ethnic and world music forms in ways that excite and stimulate. The Glorious Gongs of Hainuwele (WEAVIL 37 CD), credited I think to Harappian Night Recordings, is in fact all the work of one player named Syed Kamran Ali, performed live using African and Egyptian instruments such as the oud, mizmar and finger harp – although there’s also some crossover into Javanese gamelan. It sounds amazing (often the air of the recording itself is charged with atmosphere and background noises), and with the combination of exotic track titles such as ‘The Ire of Londa Mangali’, the images of Balinese shadow puppets, and the liner note which suggests that the whole work was recorded in a forest ‘with a crescent moon as a diadem’, you will soon succumb to the abiding impression that this is the work of a strange musical sorcerer from the East. Quite unearthly.

No less unsettling is the uncanny singing voice of American wayward folkster Dredd Foole (i.e. Dan Ireton), who performs That Lonesome Road Between Hurt and Soul (WEAVIL 36 CD) with help from the guitar, violin and percussion of Ed Yazijian. It takes considerable courage to open a recording with a 21-minute track such as ‘You Feel’, which also demands quite a lot of its listeners, but you will easily make it to the end of this opening stretch if you surrender to the ebb and flow of the song’s simple, yet very twisted, dynamics. When you do, there are six more beautiful songs awaiting you. Foole and Yazijian, like Sullender, achieve their hypnotic effects through musical talent and skilled playing of acoustic instruments in real time; they’re the players that just keep on giving. Foole’s keening voice is an acquired taste, but far preferable to the much-lauded Jandek, and it conceals unusual depths at every turn. Again like Sullender, Foole is an all-American storyteller, whose weird barely-comprehensible yarns are not packed with the kinds of surreal imagery used by Six Organs of Admittance, yet remain equally mysterious and poetic. A fine record of beautiful acoustic music and song.

Meanwhile on the eastern seaboard of the US, extreme-avantist Scott Foust continues his brave struggles against the massed forces of mediocrity. The main event this season is the long-delayed LP by Ian Middleton; fortunately, Aural Spaces (SWILL RADIO 029) has been worth the wait and is a pure gem of concentrated electronic music, packing a slow-burn punch into just ten short tracks, another beneficiary of label boss Foust’s severe ‘anti-sprawl’ editing policy. Middleton is the Scots outsider artist whose meticulous ink drawings have appeared in many places, including early issues of The Sound Projector; when not drawing, he pulls melancholic drones and minimal howls from analogue synthesisers, sometimes releasing them under his Remora alias. Aural Spaces features works made in 2004 and 2007; for this listener, it’s the later works, such as the stern opening cut ‘Negative Space’, which truly deliver on the steely promise implied by the pale blue stars that are struggling to shine in Karla Borecky’s grid-structure sleeve design. Middleton has expressed a slight concern that “people (some) will probably still think it sounds “desolate” and too simple to be good”. On the contrary, understanding simplicity is the key to unlocking the power of these drones, which continue unblinkingly in their taciturn explorations long past the point where lesser men would have given up and decided to vary the monotony by adding a drum machine or another unnecessary overdub. Another big part of the appeal for me is Middleton’s very “clean” sound, which (I’m guessing) may stem from an absence of filters and effects.

Also from Foust, the first release on his new CDR label is also the first volume of Idea Fire Company‘s Live Archives collection. WMVA (LESSONS ABOUT HISTORY LAH 001) contains four long slow tracks recorded by the core IFCO duo Foust and Borecky with Graham Lambkin for a local radio station in Amherst in 1999. Three mesmerising synths combine in pulsing and droning cross-talk to deliver slow diatribes, on such topics as ‘Underwater Missions’ and ‘Hydropeoplynes’. Even in such abstracted work as this, the rapport between these three is unmistakable. Plus there’s a new compilation cassette Lasting (PINEAPPLE TAPES 010), not yet heard at time of writing, but boasting an impressive line up of names from the roster of Foust’s friends and collaborators. Asmus Tietchens, Ian Middleton, Frans de Waard, and Andrew Chalk are all here; collaborator Matt Krefting appears on cuts by Dead Girl’s Party and Idea Fire Company, and solo; Tim Goss, from The Shadow Ring, is also here on ‘Thunder-Rum’. Personally I’ll be looking forward to the piece by Emeralds, whose recent release on No Fun Productions is essential listening (they contributed the title track here), and The Collection Of The Late Howell Bend, featuring the music of my favourite eccentric genius from Florida, Irene Moon. With not a few maritime titles scattered throughout, the tape appears to end on a pessimistic note of finality, with IFCO’s ‘The Sinking Ship’.