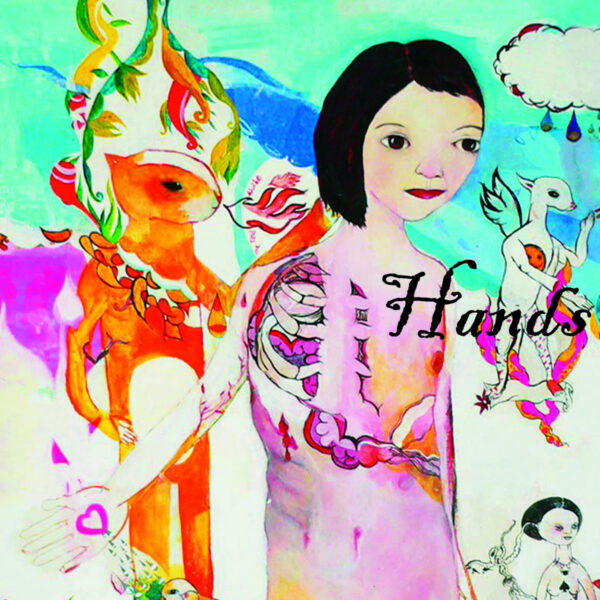 Hands (CONCRETE DISC 0902) is the work of Malaysian sound artist and installation creator, Goh Lee Kwang, a release on the Herbal International label with a stunning foldout colour sleeve painted by Melissa Lin. On the disk we have nine very strong pieces of bizarre electronic music, swooping and flying every which way with their extreme dynamics in range, timbre and pitch. With their vaguely muffled and enclosed sound, each piece gives the impression of taking place inside a stainless steel box buried at the earth’s core. Very hard to square this ruthless, near-scientific music with the organic-zoology fantasies of the cover art, but a fine tension results from the clash of the two.

We noted the Dutch improviser Spruit on previous post. I had forgotten we also received two CDRs where he teams up with the guitarist Michiel De Haan, Hollands Licht (02) and Schoonhoven (01), the first two releases on their Soul Shine Trough label. Hollands Licht contains 28 quite short tracks, where the fragmented and switfly-babbling digital noises produce a very difficult-sounding, almost incoherent stream of material. Schoonhoven is slightly easier to come to terms with, as the pieces are longer and it gives the duo more time to build up a rapport; even so, their noises and gestures are hard to interpret, and can appear almost random in their wildness. The guitar’s sound in particular has been made into something extremely alien. The duo seem to be quite protective of their ‘outsider’ status, having evolved their particular way of working in private isolation, rather than through exposure to the worlds of improvisation, music festivals, and media coverage. The downside to this is that their language may be so private that it will fail to communicate, but in their favour both these records are very unusual and extreme examples of contemporary improvised music.

Mem1 is the duo of Mark and Laura Cetilia from Los Angeles, working with processed cello and electroacoustic methods; and on the full-length album +1 (INTERVAL RECORDINGS IL03), we hear nine collaborations with various sound artists including Area C and Steve Roden. This album struck me as extremely minimal at first, but in fact I have the impression there’s a lot of very subtle activity taking place in the fuzzy slow-moving clouds of gentle ambient driftery, and never once do I have the impression that either Mem1 or their collaborators were working on auto-pilot. In other words, the whole project seems genuinely performed and taking place in real time, and studio processing effects are kept to a minimum. The vague cover images create suggestions of extra-terrestrial phenomena and strange lights in the sky, yet appear to have been created from normal suburban scenes of homes and garages illuminated by strip lighting.

Elektronavn sent us three recent items from Denmark. This solo project by Magnus Olsen Majmon plays all the instruments himself, and there’s a lot of them – mostly stringed instruments and percussion – and then he combines everything with field recordings, to produce incredibly lush and meandering soundscapes. Every release is further bolstered with mystical symbols and astral observations using words and images, and give us the strong impression that Magnus is a wild-eyed faraway creature with eyes like telescopes, roaming the night sky in search of friendly contact. Quantum Vacuum (HUMBUG 070) is on the Norwegian Humbug label and contains four long tracks, such as the opening sprawl ‘Humanity is just a grain of sand on this vast cosmic beach’, a bizarre and eccentric composition which veers and lurches across a large canvas of music, sound effects and haphazard editing in its attempts to convey the richness and complexity of the world’s endeavours, past present and future. While Electronavn is capable of producing amiable drone music, this piece is more structured and resembles an electro-acoustic composition by Lionel Marchetti. Then there’s Blind Turtle Analogy (RURALFAUNE RUR056), released on a French microlabel, which obsessively repeats the pyramid imagery so beloved of this wayward visionary on its cover artworks, and offers plenty of grand-scaled mystical observations in the music such as ‘Chant of Spiral Continuum’ or ‘Rebirth / A Thousand Lives’. So far I am most grabbed by ‘Echinacea Purpurea’ where Magnus is playing the violin or cello as though the fate of the whole universe depended on him keeping up this frantic attacking motion with his bowing arm. Lastly we have the double-disc set Rationale Mystique / Audelà L’Inconnu, on his own Empty Sounds Rec label. This is a reissue, slightly revised and with some bonus cuts, of two CDR releases which we noted in the magazine when they appeared some 4-5 years ago, but it’s nice to have them in this new package with a fine booklet full of amazing photos of craggy trees and astonishing light-on-water effects.

All the above arrived in the Sound Projector Trough in August 2009.