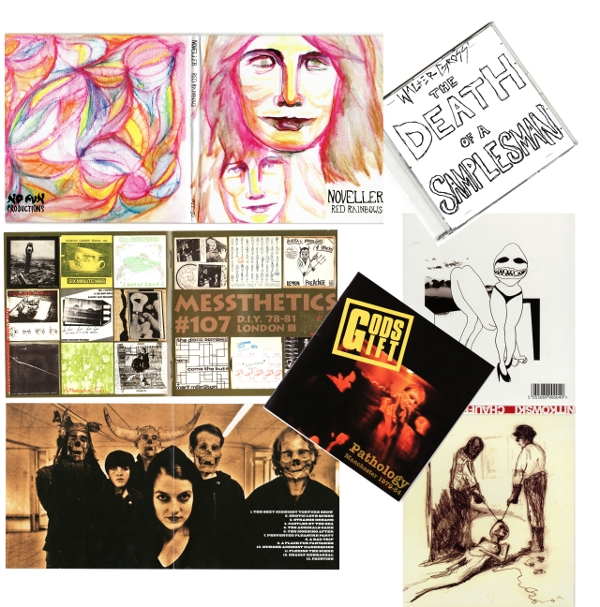 Noveller is the Brooklyn-based musician and film-maker Sarah Lipstate, whose groovy approach to minimalist guitar-growlage we note in our current issue with her vinyl LP Paint On The Shadows. Now here she be once more with Red Rainbows (NO FUN PRODUCTIONS NFP-50), a CD packaged like a miniature gatefold LP as is the wont of No Fun Productions. This release is a more maximal statement, a series of high-tower juddering tones where the very air is thickened up with rich layers of electronic sound, allowing space for textured drones, mysterious moanings, and distorted gruntamaroons that makes for a highly varied listen. ‘Rainbows’ and ‘Brilliant Colors’ are packed with soaring observations like some raving holyman from the Bowery, while ‘St Powers’ and ‘Tunnels’ return us to the introverted, reflective mode which Lipstate knows so well as she contemplates the peeling wallpaper and enormous windows of her (I hope) wonderful apartment. There’s also a short film ‘Interior Variations’ burned into the micro-piles of this enhanced digital throbber, and once again some very tasty full-colour artworks from Caroline Contillo decorating th’ pack.

Another sinister utterance from those scowling maestros of doomy art-rock, The Mount Fuji Doomjazz Corporation. Succubus (AD NOISEAM ADN 112) offers up 13 dripping tracks of sepulchral gore recorded live in Rotterdam in early 2009, and through images, track titles, costume and make-up, the band let it be widely known that their taste runs freely to all that is gothick, macabre, and flavoured by the occult. I’ve always hoped for a little more bottom-end in the sound from their lugubrious workouts, but a stoner-death metal band they ain’t, rather preferring to summon up cloudy atmospheres of a haunted nature, and dwelling in them for as long as necessary until all personal demons are either exorcised, or start to join in the fun.

The good people at Hyped To Death CDs in Massachusetts have been engaged in a mind-boggling archival project for many years now, rescuing and reissuing incredible collections of post-punk singles and cassettes on CD in a systematic and thorough manner. One installment in the ongoing Messthetics series has reached us recently, this one (MESSTHETICS #107) concentrating on D.I.Y. and indie post-punk music from 1978-1981. When I tell you that all 22 tracks come exclusively from bands based in London, and that it’s the third volume in the London series, you’ll have some idea of the richness of treasures that this label are dealing with. The CD comes with a 24-pp booklet packed with informative historical notes and photos, and there are some drool-worthy seven-inch sleeves reproduced on the cover. I can’t single out any one band as to me the whole CD is equally thrilling from start to finish, but a few names include Jelly Babies, Avocados, Six Minute War, Stolen Power, Steppes, Disco Zombies, The Milkmen, and Design for Living – plus of course The 49 Americans, everyone’s favourite art-pop combo that were the missing link between the LMC improvisation scene and post-punk. If like me you feel that post-punk is one of this country’s more important and overlooked contributions to mass culture, or even if you just love seeking out obscure and little-known bands, you’ll be as happy as Larry with this comp and others in the series.

The same label has also put out a terrific compilation of the skeletal music of God’s Gift, and Pathology 1979-84 (MESSTHETICS #218) will tell you much of what you need to know about this brilliant Manchester guitar-sax-vocal group who were active at the time when Joy Division were getting all the column inches. Based on first-hand knowledge from Prestwich Asylum, they sang with a painful honesty about the problems of mental illness, with an edgy vocal style that’ll make your flesh crawl. Highly recommended, this comp is taken from rare releases on the New Hormones and Newmarket labels, plus cassettes and unreleased live tapes.

Post-punk fans will also want to bend an ear to contemporary band Nitkowski, a vivacious grunge trio from London whose debut Chauffeurs CD (FUNCTION RECORDS FUNC020) came out in September last year. It’s great to hear players tearing into the guitar-bass-drums set-up with such loose-lipped enthusiasm and still finding new things to say, in much the same vein as Shield Your Eyes, another unkempt and noisy London combo who likewise saw roughly into their tunes with the ferocious abandon of a cannibal. Nitkowski may want to do something about beefing up the thin screamy vocals in their songs, but their instrumental interlockage is just about dead-on for this listener, and I like the straightforward way the record has been produced to preserve a sizzling live studio sound. It reminds me of the time in the mid-1980s when a small coterie of UK indie bands (such as Stump) were aping the sound of The Magic Band’s atonalities, although Nitkowski have a melodic-ish poppy edge to what they’re doing too. Plus it’s interesting to hear them experiment with eerie noise-compositions like ‘Mutha Terracist’. A nice one!

Obscure item of the week is The Death of a Samplesman, a home-made CDR sent to us by Walter Gross wherein Mr Gross (formerly member of LA band Youth:Kill) enjoys much sport with his beatboxes and computers, throwing together extremely unlikely and ill-fitting music samples on top of his twisted trip-hop beats. He works with all the restraint of a pizza-man who’s decided to lavish all the toppings he can fit onto one 12-inch slab of hot dough, and he’s got a fascinating way with varispeed that causes instant aural nausea. While the record seems unfinished and tentative in places, Gross is capable of occasional flashes of lunatic creativity where everything just seems to be spinning apart in a self-destructive whirl of excess, insanity and bad acid. No website; email [email protected]