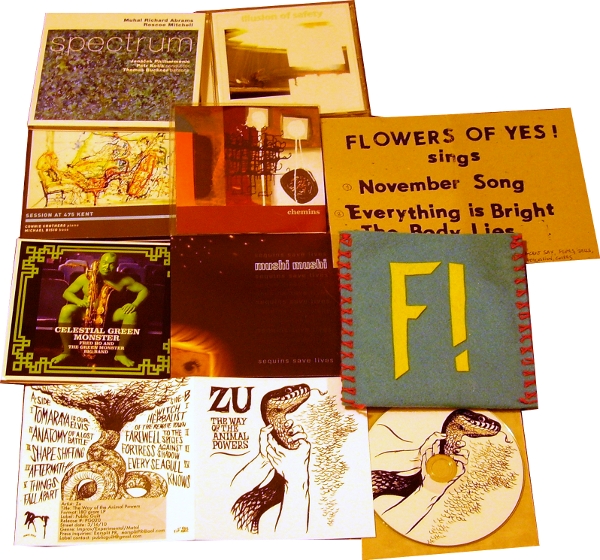 The thing in the blue felt package is from Marc Kellaway in Copenhagen, sent here in early December 09. Inside the hand-made package, a hand-lettered insert and a hand-made CDR, on which we hear the fragile hand-made music of Flowers Of Yes! They perform three all-acoustic song and instrumental pieces, using plenty of percussion, keyboards and flutes, all boasting a very skeletal construction and a rather melancholy tone to be discerned in the croaky, mannered voices of the three contributing vocalisers. An extremely fey take on the avant-indie songwriting thing, so dissipated as to be almost bloodless, with everything shrouded in alienated mystery and confused, hurt emotions. Email [email protected] to seek out your copy of this spindly record.

In quite different vein, the lively new release from Newcastle label Distraction Records is Mushi Mushi with Sequins Save Lives (DIST 18); 13 fine indiepop songs performed with remarkable expertise and minimal crispness by a Tyneside quartet of young alt-disco fanatics. Some years ago I seem to recall numerous fashionable bands layering analogue electronics onto everything they recorded in some futile attempt to win Krautrock credibility points, but Mushi Mushi’s approach in that department in characterised by its admirable restraint. Apparently this isn’t released until March!

Speaking of restraint, bend an ear to this item from Finland, an odd little CDR by Chemins simply titled cdr#2. One-and-twenty minutes of pleasant electronic droning, pulsing, and murmuring shalt be thy portion should ye elect to purchase this item directly from the group’s website. This untitled statement arrives in a decorative semi-abstract cover which may represent tyres hanging from lightbulbs near a wine-rack, or something.

Chicago’s Perdition Plastics have reissued an important record by Illusion of Safety. Probe (PER 012) originally came out in 1992 on the Staalplaat label packed in a wooden box with an Italian coin, and besides featuring the main IOS man Dan Burke (a veteran electroacoustic chunter-meister of sinister proportions since 1983), it’s one of the first appearances on record by Jim O’Rourke, made when he was studying composition in Chicago. Probe‘s methodology certainly does foreshadow a lot of things which have since become common practice, especially in the extensive reworking of field recordings, but I get the feeling there is much compositional inventiveness lurking beneath the surface of these strange, blanked-out drones which are juxtaposed with shattered samples to create startling effects. Two long tracks at the start will offer you so much ambiguous virtual space, you’ll lose your horse and cart (and the entire desert caravan) in a matter of minutes. What little I have heard of IOS suggests this one also fits right in with his agenda of producing challenging, discomforting scapes.

Celestial Green Monster (MUTABLE MUSIC / BIG RED MEDIA 001) is one of three jazz-inflected releases sent in by Mutable Music. Fred Ho and The Green Monster Big Band make their debut release and play entertaining cover versions of the ‘Spiderman’ theme and ‘In-A-Gadda-Da-Vida’, among others. Not especially avant, but nor is it the infuriatingly ‘wacky’ package I feared it might be; the record may veer towards an overly smooth sound, but you can’t fault the precision playing of the players.

Session at 475 Kent (MUTABLE 17537-2) features four lengthy improvisations for the piano and bass by Connie Crothers and Michael Bisio respectively; I think I like them best when they go for all-out unpleasant noise (Bisio has a way of making his bass creak and snarl that could shrivel the skin on your rice pudding). When they back-pedal into more conventional jazz-based chords, I find my interest waning slightly. Crothers however remains justifiably proud of the exceptional recording quality (the word ‘vivid’ doesn’t begin to describe it), which she did herself through careful positioning of her Neumann U87s in her open loft space.

Spectrum (MUTABLE 17536-2) is of interest for those who wish to check in on the work of two free jazz heroes, the estimable AACM founder members Muhal Richard Abrams and Roscoe Mitchell (the latter also from Art Ensemble of Chicago). They only actually appear on the opening track ‘Romu’, but it’s such a gorgeous 11-minutes of elegiac, near-classical acoustic jazz that you won’t feel short-changed. Their compositions are featured on the remainder of the disc, two pieces performed by the Janá?ek Philharmonic with the help of the baritone singer Thomas Buckner delivering a poem by Joseph Jarman on ‘Non-Cognitive Aspects of the City’, and playing richly post-modernist discordances on ‘Mergertone’ composed by Abrams. If you enjoyed Ornette’s Skies Of America, this one will bear investigation as another example of jazz musicians making creditable forays into new music composition.

Zu are the far-out Italian improvising rocky-mode trio who use sax, bass and drums to defeat the opposition with ease; the odd club-like shape of the drummer’s forearms enables him to deliver crushing tromps. I still prize their seven-inch picture disc which was released years ago on Public Guilt; now this most cool of American indie labels has put out The Way of the Animal Powers (PG020) on heavy vinyl in a gatefold cover, rescuing a 2005 CD from the Xeng label. As an added bonus, the amazing cellist Fred Lonberg-Holm joins them, adding a light touch of spidery-spikiness to the equation with his nimble stabs. This makes a welcome contrast to the heavy-fisted belts of Luca T Mai and his crew, not that I object to being hammered sideways by their prog-inflected beats and vaguely queasy atonal blats. Note snake handling on cover drawn by their resident eyeballist, Scarful (whose distinction to visual art is that he makes the average tattoo parlour look subtle in comparison). Also note that said snake handler has two right hands. Unless it’s two separate people handling the snake. This also won’t be out until March,. Guess I’d better reserve a vinyl copy soonest.