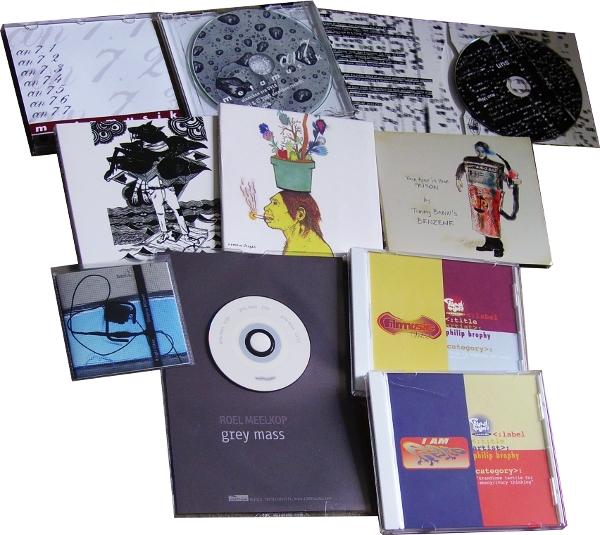 Three gazeous jazz-inflected items from the Drip Audio label in Canada. Inhabitants from Vancouver are a quartet using guitar, bass, drums and trumpet in many open-ended ways on A Vacant Lot (DA00579) to produce dreamy quasi-cinematic episodes with suggestive titles like ‘What about the water’ and ‘Far Away in Old Words’. Sheldon Zaharko has recorded this band to give a slightly muffled quality to their sound, adding greatly to the puzzled and melancholic tone of this album. JP Carter’s trumpet is singularly affecting here. The striking symbolist cover art by Scott Malin leads one to expect a different sort of record altogether, but this is still very good.

NoMore Shapes from Calgary also make heavy use of brass instruments interacting in interesting ways with guitars and rock rhythms on Creesus Crisis (DA20622), but their approach is much more restless and dynamic than the languorous Inhabitants. One thinks of a slightly off-beat version of Dizzy Gillespie’s bop combos, or even the cool jazz small groups of 1950s Miles. There’s the same intimacy in the recording and crispness in the overall sound. A beguiling cover image offers us a very idiosyncratic take on the theory of human evolution.

Tommy Babin’s Benzene from British Columbia are also a jazzy-type quartet led by the composer / bass player Babin, giving Chad Makela room to shine on his baritone sax. Your Body Is A Prison (DA 00584) is an entire jazz suite in nine separate movements, with a real precision of thought in the way the interleaving sax, electric guitar and percussion lines are managed. Complexity is made to appear almost effortless and never once do these cats sacrifice their swing feeling or emotion on the altar of intellectualism. The underlying theme of the record may be something to do with the liberating qualities of music; an old photo inside the digipak represents a medium floating off his chair in the middle of a big crowd, and perhaps the record is intended to pass on a similar out-of-body experience to the listener.

Now for a terrific double CD set of early 1980s experimentalism. All the pieces on What Does The Brain Have To Do With It (C.I.P. cipcd24) were recorded by Z’EV under the name of uns between 1980 and 1982, in locales in San Francisco and Brixton. Using his own voice, prepared tapes, turntables and a Farfisa organ, Z’EV unleashes all sorts of strange psychic forces in these brilliant nightmarish exercises, which fearlessly walk the tightrope between sprawling diffuseness and a taut precision of ideas. Like many of the best modernist composers, Z’EV knows how to put simple ideas together to generate their own energy, propel themselves forward in the simplest and most direct ways imaginable. The label correctly identifies this work as an exciting combination of sound poetry and voice treatments and claims that it ‘resulted in audio that today is still challenging, unique and engaging.’ I cannot help but agree 100%. Please bend an ear to these abrasive and mesmerising murmurings; your mind will dissolve in a whirlpool of anxious, dark mystery.

Got a couple of small items from Gregory Büttner and his 1000füssler label from over in Hamburg. Dutch experimenter Roel Meelkop may be aligned perhaps with the Asmus Tietchens school of gradual accretions and minimal layerings, and Grey Mass / Grey Matter (1000füssler 014), which exists as two 3-inchers stuck either side of a piece of card, exhibits in its title and its audio content a preoccupation with blank, indefinable abstract shapes and their slow progression, or lack of it, over a terrain of uncertainty. Interestingly, all of this wispy and enigmatic material was derived exclusively from tape recordings with no electronic music or processing whatsoever.

Büttner collaborated with visual artist and sound experimenter Birgit Ulher to produce Tehricks (1000füssler 015). Büttner’s computer sounds were played through an array of small speakers, while Ulher used said speakers as mutes for her trumpet, physically placing them in the bell. This would allow the electronic sounds to resonate in unconventional ways. I like the unorthodoxy of this approach, and the way it suggests a physical interconnectedness between the two players which you may not find in most improvisation set-ups. That said, the results are thin and not very interesting to listen to; something feels rather forced and constipated about it.

Some interesting bleepery and wayward playing from Metamusik, which is the duo of Daniel Carlsson and Johannes Rytzler. On Con7 (EINNICKEN ERA 0918) they present further evidence of their project which since 2005 has been striving to find a way of improvising within the electronica framework, in order to get away from what they perceived as ‘random sound experiments’ and make a return to simple music-making. I’m all for it. At their best moments here, they do manage to escape the straitjacket of the clean lines and grid-systems that might be said to characterise the schools of Cologne and Mille Plateaux since the 1990s. My only reservation is when they attempt to pluck out half-baked melodies on a distorted piano in the middle of a track, only to arrive at some species of airport lounge music thereby.

While we ponder the idea of ‘meta-music’, who better to mount the podium than the Australian technician and whizzoid composer Philip Brophy, whose brain teems with fresh thinking about movie soundtrack music and avant-garde composition, as evidenced by the wide-ranging and powerful ideas in his critical and theoretical writings. We haven’t heard from him for a while at TSP, but I see his records still follow the same distinctive packaging strategy with the blocks of colour, trademarked symbols and logos, and a layered sense of ironic humour underlying all the tiny printed messages and subliminal images. On Filmmusic Vol 2 (SOUND PUNCH RECORDS HURT-13) we have a number of pieces he composed, arranged, played and produced for various movies between 1993 and 2005. From the composer’s detailed notes, there can be no shred of doubt that he engages fully with the demanding process of soundtrack composition, ensuring that his musical ideas and methodologies are completely in sympathy with the meaning of the film, and bring out underlying detail from the particular cinematic passages he is scoring. Yet as a listening experience, I find most of the music here oddly unemotional, in spite of the obvious technical skill that has been poured into its making. Only the four pieces for Only The Brave start to come alive for me – they were produced in late 1993, using keyboards and guitar and samples captured from live musicians. They sizzle and crackle where the later pieces meander and amble.

As to sampling, that method pretty much forms the basis for Brophy’s I Am Piano (HURT-14), which is made up entirely of samples taken from recordings of jazz pianists, and performed live on Brophy’s keyboard sampler. For this, he works within a disciplined conceptual framework based on his detailed knowledge of how the sampler actually works, and produces five lengthy and complicated explorations from the music of Brubeck, Monk, Bill Evans, and others. Along the way he asks us challenging questions about the nature of the way we perceive sound in the contemporary environment, wondering out loud if any of us have ever really heard a piano (as opposed to a convincing piano patch on a synthesizer, perhaps) and what it would mean even if we had. From these ruminations, a startling record emerges; Thelonious is transformed into a species of hyperactive Conlon Nancarrow, while Red Garland has become the master of some sort of insane dancefloor music. ‘Grandiose tactile for ebony/ivory thinking’ is the composer’s own subtitle for this work. I’m not denying for one second that Brophy knows his jazz, but it’s unfortunate that Theolonious Monk’s name is spelled incorrectly on the back cover, as this was something that caused no end of vexation to the man while he was alive.