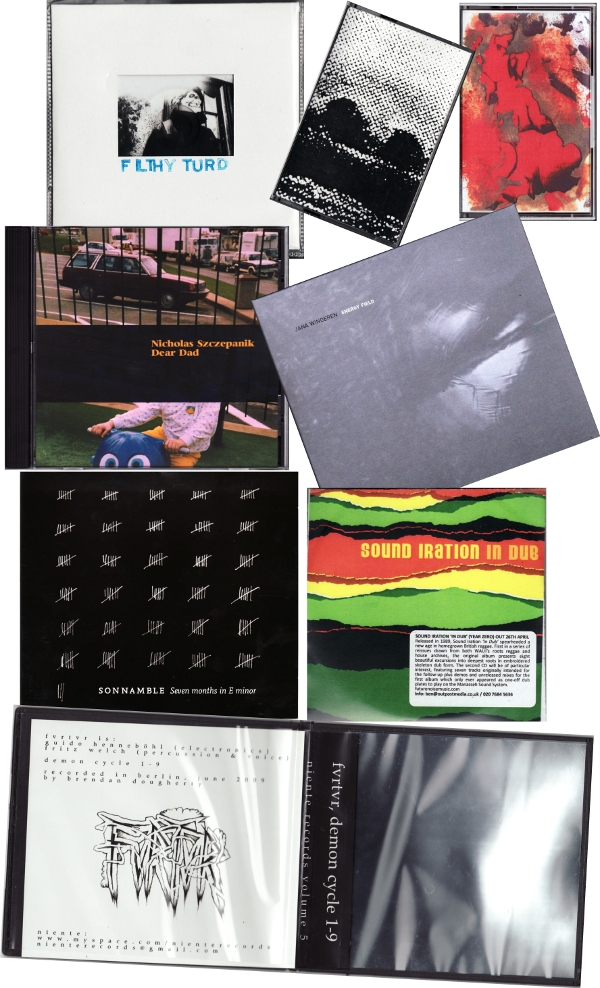 Got another package from he who calls himself Filthy Turd (arrived early March 2010), comprising two cassette tapes and one CDR of disgusting, unlistenable noise. Death Ejaculations (KNIFE IN THE TOASTER KT086) appears to be start-to-finish blankets of abrasive monstrousness, the sort of crumbly and bad-tempered noise that may have black nuggets of wisdom lurking within if we can find time to look. The cover is all black process dots and blobs, suggestive of a newspaper picture blown up on the photocopier. On the shorter collaborative tape by Filthy Smear, called Constipated Albion (TOTAL VERMIN #26), the creators are having grisly amusements with grotesquely twisted voices, mangled tapes, horrifying sound effects and vile blasts of soaring racket, while the cover shows us a map of the UK drenched in thick red blood. A good diagnostic message on the sick, clogged-up state of nation is one way of reading this creepy episode of vomitous din. Even the shell of the cassette is bright red, adding to the general sense of alarm. An Occult History Of The Midlands (FRAGMENT FACTORY FRAG05) is the most nightmarish item in the bunch, using groaning voices, repellent abstract noise and foul tape loops to convey unpleasant fragmentary tales of modern urban bogeymen lurking in public toilets (and the nether regions of the mind, by extension). Hell and damnation are only a heartbeat away in this insufferable world of mental and physical torment, a scenario which includes the strong possibility of Satanic forces claiming many an uncertain pilgrim. The creator may be trying to do for the Midlands what Mark E. Smith has done for Prestwich and Manchester. What a great picture of the Grim Reaper on the cover too. Micro-edition of 37 copies!

Nicholas Szczepanik composes an aural letter to his departed father on Dear Dad (GOAT EATER ARTS / BASSES FREQUENCIES), finding that music and sound “say much more than any amount of words ever could”. He delivers himself of his filial burden by gradually building a massively long and overloaded track of droning and guitar layers, which increases exponentially over time in a strict and near-formulaic manner. This example of Nadja-by-the-numbers is followed by something quieter and more intimate, and the record amounts to a minimalist monument of sorts. Family photos are reproduced on the cover; in both cases the face of the boy on his bike (Szczepanik when young?) is deliberately obscured and masked. 200 copies only of this highly personal item, co-released by American and French labels.

Not quite sure why we were sent a copy of Sound Iration In Dub (YEAR ZERO), but I’m not ungrateful for a chance to hear this reissue of a 1989 record which is widely regarded as a benchmark achievement for UK dub music. Nick Manasseh and Steve “Scruff” Guilder were bold DJ-producers who, it is claimed, virtually invented the style which has since come to be known as 80s digidub, which involves using drum machines, sequencers and synths in place of real musicians in the studio. Killing Joke’s Youth steps forward to testify as to the importance of this influential record. Presumably it has cast a long shadow across UK dancefloor records, but I wouldn’t know the first thing about that. It’s interesting that in spite of all the new possibilities this working method must have opened up, the record continues to imitate the overall sound of 1970s dub – bass, drums, piano and guitars…even the sound of the melodica is digitised, and so is the faithful Copycat Echo. With a bonus disc of unreleased dubplates, this’ll be released 26th this month.

Sonnamble is a collaboration between the composer Conor Curran and guitarist Peter Marsh, and on Seven Months In E Minor (FORWIND FWD01) we hear the thoughtful and contemplative meshing of computer software and digital processing with real-time guitar and bass playing. The record pays its due homage in the direction of modern ambient and glitch music, and the creators also apparently have the pioneering work of Robert Fripp on their minds. The record was made all live and with no overdubs, which adds a certain amount of spirited tension to the work. Myself, I like it best when they avoid semi-melodic or pleasurable note-stretching in favour of something more gritty and disjointed. I understand the conceptual pun being played by the front cover, although with its sombre caste it also has the unintended effect of resembling the wall of a prison cell where the captive is counting down the days to his release.

Jana Winderen continues to make mysterious and graceful oceanic recordings with hydrophones and other specialist devices, and Energy Field (TOUCH TO:73) was originated in the Barents Sea, Greenland and Norway. What I take to be several separate episodes of marine life, ocean spray, weather and travel in boats are elided together in the editing suite to produce three lengthy adventures of the like I haven’t experienced since my four years before the mast. Even so, despite the album title and a track called ‘Sense of Latent Power’, this still feels like a rather cold and subdued listen; the energy of which Winderen sings may be packed in blocks of ice that are twenty feet thick. Nature’s power is grim, foreboding and even a little bit menacing; perhaps the sea is about to exact a hefty price for all the centuries of abuse it has endured at mankind’s careless hands. Nonetheless, this CD is a spectacular widescreen event, and played on large speakers it will demand that you surrender your entire body to the immersive sonic joys it unleashes. Just be sure to don a diving suit and helmet first.

I’m personally quite thrilled to be sent Demon Cycle 1-9 (NIENTE RECORDS VOLUME 5) by fvrtvr, a silver-clad beastie which arrived from Italy one fine day. The label itself is an obscure CDR imprint which is only about one year old, and it’s owned by musicians; their mission statement is to disseminate “works by independent and creative artists who possess their own personality in musical choices”. Fvrtvr certainly have a personality, but in my estimation it’s a schizophrenic and disturbed one. The duo of Guido Henneböhl and Fritz Welch contrive to use basic instrumentation (electronics, percussion, and wayward vocalising) in crude and primitive ways, to deliver themselves of many dark and brooding observations. Switching between sullen, sulky noise and insane vocal chattering, these two mental cases create sustained and disturbing moods at their best, especially when they allow themselves space to stretch out and tunnel down into their innermost black brain-lobes. The press note is also rather surreal, describing the release as “a cycle of dry yodel and cack”.