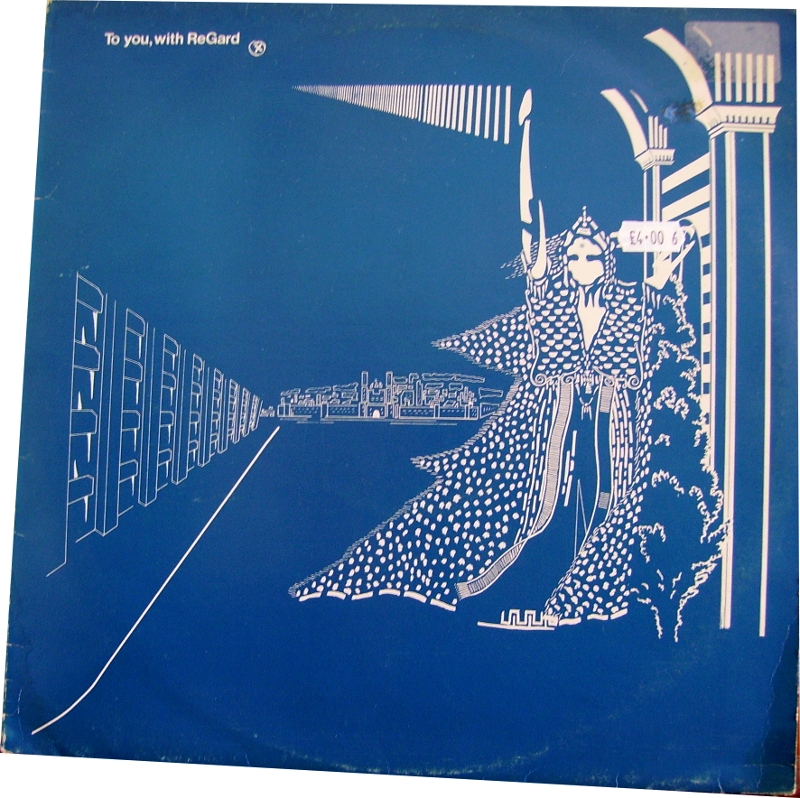 To my astonishment, I recently managed to pick up a copy of To You, With ReGard (CHANT RECORDS EJSP 9692) by Sudden Sway, one of my favourite UK bands to ever have been labeled within the post-punk pigeonhole. This is a four-track 12” single released in 1981 on the Chant label; not easy to find in any shape. It could be their second release (one single a year – they weren’t exactly very prolific!) after the 1980 single Jane’s Third Party, which I also happen to own. I’m still looking for Traffic Tax Scheme. But from what I can hear Sudden Sway have already evolved into their recognisable signature sound. What we got is a very spartan assemblage of guitars, bass and drums, with the percussion sounding like an amplified form of woodblocks, or maybe just hitting a tabletop; completely lacking in any sort of flourish or showing off. The guitar has some near-psychedelic effects added on, but these too are basic and austere. Then there’s the singing voice. It’s always hard to know where to put yourself with a Sudden Sway record, but it’s the singing in particular that adds multiple layers of second-guessing, irony, and doublethink. Is he being sarcastic, or genuinely bored and agonised? The subject matter of the disjunctive lyrics is also pretty hard to penetrate, although we seem to have vague and very disenchanted references to urban life, young people, and dancing. It’s as though Sudden Sway had gone to tremendous lengths to create a pop record, then carefully distanced themselves from every conceivable cliché and pitfall involved in the process, just in case anyone was in danger of thinking they were too “obvious”. Don’t forget though this was around a time when numerous UK bands were enjoying chart success with what was then regarded as quite sophisticated pop music (Culture Club, Spandau Ballet, Depeche Mode, et al), and heartily endorsed for their efforts by intellectual writers in the pages of the NME. I personally find Sudden Sway’s convoluted and stilted methods quite fascinating, but I can see how a lot of listeners (if they got anywhere near this band) would have been puzzled at best, infuriated at worst.

Besides the cryptic and elliptical lyrics, we have an 8pp 45 photocopy booklet inside the record, which miraculously survived. I’m showing the covers and centre spread in my photos here. The covers appear to be a cross between a circuit diagram and an imaginary tube map, with witty variant station names like ‘Morden Likely’ and ‘Lester There’. The spread is a handwritten concrete poem producing a spiral shape, and the rest of the booklet is filled with indecipherable and bizarre cut-up typewritten texts. Plus we have the perplexing front cover art, which reads like a diagrammatic version of a Jade Warrior album.

As you can see I remain silent on the matter of personnel and credits, mainly because they aren’t printed on the cover and also because over time it’s proven very difficult to nail down the membership of this band, who whether by accident or design tried to adopt a low-profile and mysterious persona throughout their career, possibly as a subversive gesture of some sort. They even (especially?) carried on with this strategy when they signed to a subsidiary of a major label. They weren’t quite as successful with this as The Residents, but I suppose it’s all about getting us to concentrate on the music rather than the personalities of the creators. However, it so happens that inserted in the copy I bought is a photocopy of an article from the music press of the day. It’s an interview with Sudden Sway conducted by Dave McCullough, probably taken from Sounds, and a published review of this same record. I’m immensely grateful to the previous careful owner of this record who preserved this snippet. In the interests of supplying secondary source information to the few Sudden Sway scholars who may be out there, I am providing a scan of this material in PDF format. Happy reading, pretty people!