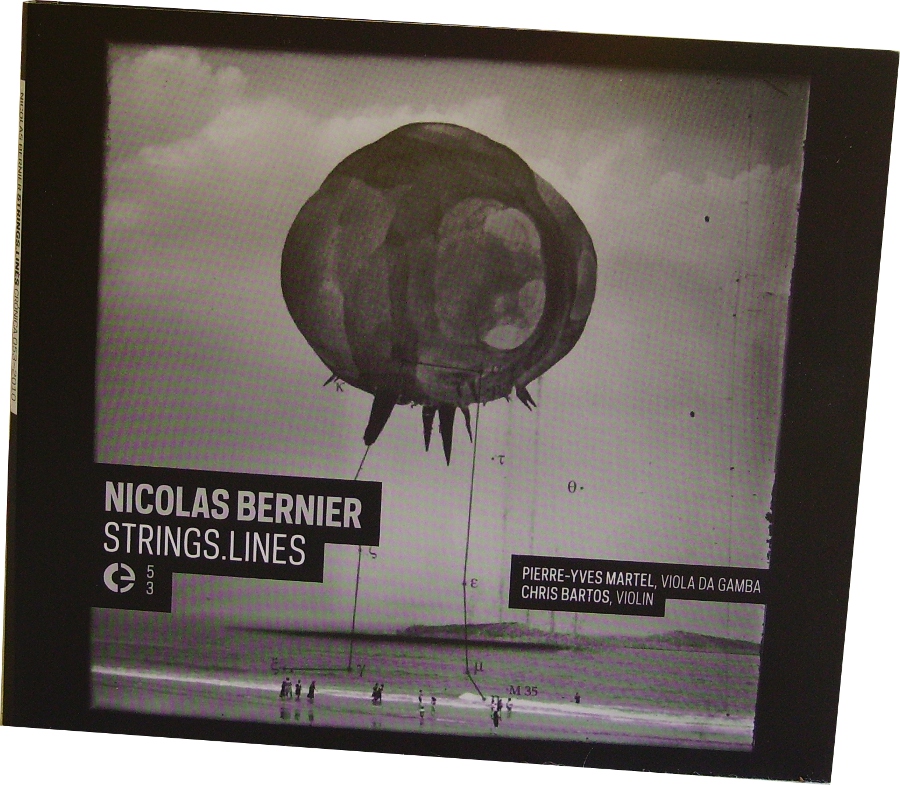 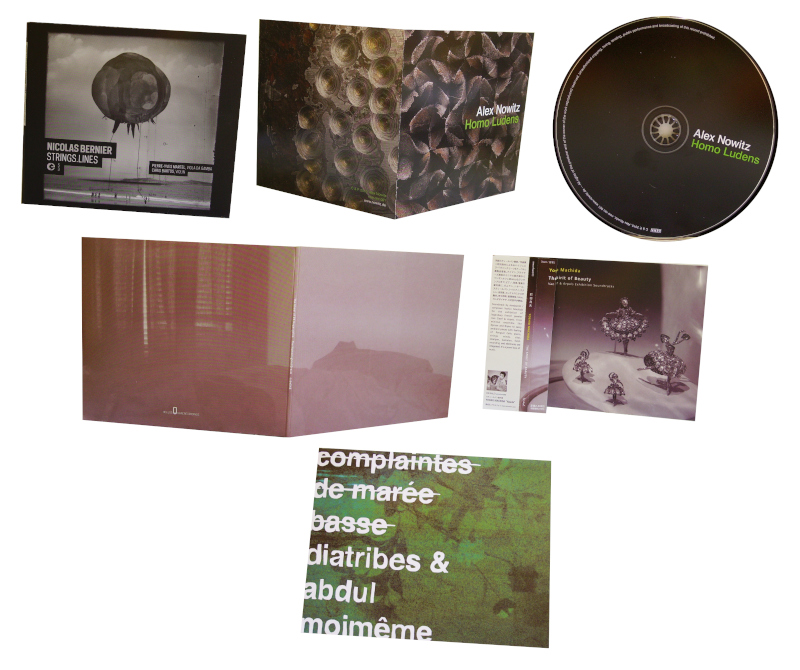 Some exceptionally fine modern composition from German cove Alex Nowitz, who can compose, play keyboards, and sing as well, and often does it in combination with guest ensemble performers playing their classical acoustic string and woodwind instruments. Homo Ludens (NOW-REC 001) contains three recent suites, of which the opener is quite a stately microtonal grabber – ‘Sirens’ Tears and the Sounds of the Soul’ is a ten-minute two-parter on which Nowitz provides all the voices (and he’s got quite an impressive range of octaves), plays the Korg synth, and adds the clarinets of Theo Nabicht to the very brittle completed work. This one (to my superficial sensory apparatus at least) is akin to a conference between Ligeti and Arrington De Dionyso, with a little bit of Henri Chopin’s lippy raspberries thrown into the pan for additional cerebral-gibberish effect. There’s also ‘Music for a Singer with Live-Electronics and 10-Speaker Playback’ which is a bit more disjunctive, using some quite wild electronics and barked-out spoken word segments (some taken from a Shakespeare sonnet); and ‘Angelus Novus Nr. 2’ which further exhibits Nowitz’s uncanny pitch control of his basso profundo growls and grunts. This last was inspired by a Paul Klee painting. Fine release with a lot of energised crackle and fire; I look forward to picking out the nugget-like clusters of ideas that are encrusted in this meteorite from Germany.

Nicolas Bernier is another modern composer, based in Montreal. On Strings.Lines (CRÓNICA 053) we hear five compositions of his played by Pierre Yves-Martel and Chris Bartos, on the viola da gamba and violin respectively. At the heart of these works resides an obsession with perfect pitch, as manifested by that simple device the tuning fork; over time Bernier grew so preoccupied that he built up a substantial collection of forks in the way that you or I might collect old milk bottles, and the fork’s constant pitch is what formed the basis of these monotonous, droney, melancholic string works, on which the musicians were instructed to stay as close to the fork’s pitch as possible. Bernier was quite literally “feeding” the players their cues with his forks. Not unaware of what he deems to be the “symbolism” of the notion of perfect pitch, a way of organising music that has led to the current state of Western tonalism, Bernier is attempting to continue the traditions of that symbolism in some way. I bet he and Tony Conrad would have some interesting discussions.

Swiss improvising duo Diatribes offer us another new collaboration, following their memorable team-up with the UK’s Barry Guy which resulted in a strong piece of free grumbly-music with some political undertones. On Complaintes De Marée Basse (INSUBORDINATIONS INSUBCD021), Abdul Moimême joins D’Incise and Cyril Bondi to create what they call an “electro-acoustic oriented album”. This phrase may refer to the two prepared guitars (hopefully electric, amplified, and strewn with fragments of junk) that Abdul wields like two massive metallic clubs, ready to smite all opponents of liberty and free expression. Better take cover when this sauce-box starts rubbing his poisoned strings, as he seems equipped to summon the force of an electrical storm (in his quiet and brooding way, of course). His gloom-laden thunderclaps sit well with the skittery multiple percussion effects, bowed objects and laptop twitterments from the two Swiss madcaps on these 2009 recordings made in Lisbon.

Last heard from Yoshio Machida with his Steelpan Improvisations 2001-2008 about a year ago; here he is now with The Spirit Of Beauty (AMORFON 011) released on his own label, where he further explores his prowess with that slightly detuned percussive instrument, playing it along with keyboards, gongs, Gamelan instruments, computer programming, a ukulele, voices, and even some field recordings (such as birdsong) all blended together in these seamless studio constructs. He does achieve some unusual and never-before-heard combinations of sound on these “minimal ensemble and ambient jazzy” pieces, but I find it hard to discern the lines of thought on these centreless, shapeless meanderings; at times there seems to be a melody one can follow here and there, but it soon dissipates in the air like a soap bubble amongst a display of shimmering prettiness. At worst, Machida is creating sophisticated elevator music. The work was used to accompany an exhibition of jewels.

The Ghost of 29 Megacycles is an Australian trio based in Perth and Melbourne bringing us their personal brand of sweet ambient electronic droning on The Hummingbird Dream (HELLO SQUARE RECORDINGS CUBE043); most of this release showcases Greg Taw who overdubs his suffused guitar and organ murmurings with some field recordings to produce the 24-minute epic opening track. Wisely, he refuses to vary the pace, timbre, tonal range or anything else for the duration, thus allowing the listener to enjoy the soul-stirring sensations of a sunset in slow motion, or a dream of flying over benign alien landscapes on wings of purple feathers. On the second part, Taw is joined by vocalist Jessyca Hutchins and organ player Rupert Thomas, to produce a slightly more dramatic combination of mixed chords, throbbing drones, airy angelic singing, and mesmerising effects. A lot of people working in this area strive hard for that elusive feeling of “epic timelessness”, but The Ghost of 29 Megacycles seem to achieve it without even trying. Despite layers of studio craft, what emerges is very natural and instinctive music, warm and human. A nice one. Be sure to look out for their 2009 release, Love Via Paper Planes. Also note the cover art, which I thought was a blurry photo of the Australian landscape, but turns out to be an unmade bed. This may say something about their music, finding all of nature’s grandeur contained inside a simple domestic scene. Also it clues you in that the music is somnolent and dreamy, in a good way.