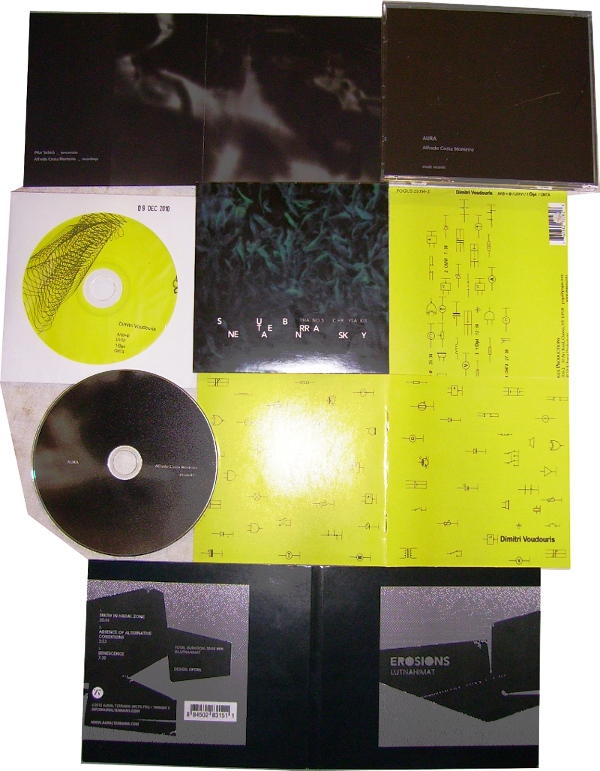 Aura (ETUDE 021) is an excellent process piece put together by Spaniard King of Austerity Alfredo Costa Monteiro. It’s constructed from numerous recordings of the percussion instruments of Pilar Subirá, and in making his assemblages Alfredo worked only with edited segments of tape where the “point of impact” has been removed (meaning, I suppose, that we can’t hear the percussive blow), leaving him with long stretches of resonance and decay. He seems to have entered a near-trance as he layered together these episodes, labouring at the electro-acoustic Movieola and finding consonances and correspondences in the most subtle and imperceptible of detail. If he was doing this as a housepainter, I can imagine him working through all the available combinations of 65 slightly different rolls of off-white wallpaper. He’d come up with such a perfect schema for your living room walls that you would immediately enter a state of ecstasy simply by the act of entering the room. Not exactly an “eventful” listen, nonetheless it’s a much more solid and distilled piece of gentle droning purity than if he’d arrived at it through purely digital sound-generation methods.

Is it just my imagination, or are a lot of people doing the “live music plus field recordings” thing lately? That’s pretty much what greets your listening flaps when you spin Subterranean Sky (AURAL TERRAINS TRRN0412) by Thanos Chrysakis, where his mixing desk purrs like an enormous seal on the rocks as it quietly accepts multiple layers of his “composed and de-composed” sounds between its hungry tusks. Actually the live music elements here aren’t as widespread as I first thought; he adds his own metal percussion thranngs to the equation on but two occasions, and is joined by a clarinet and guitar player for one track, plus a viola on the closing piece. Now that I succumb to the magnetic pull of this disk a little more, gotta confess there’s a faintly compelling undertow to some of these wispy highly-processed drones. Born in Athens, Thanos currently resides in London.

Born some ten years earlier than his compatriot above, not that age matters, is Dimitri Voudouris who is fact South African but was born in Greece. Pogus has assembled a handy collection of this self-taught electro-acoustic composer, and A?O=?/ UVIVI / 1:??4 / ONTA (POGUS PRODUCTIONS P21056-2) displays an impressive range of avant-techniques and methodologies – computer-assisted composition, graphical scores, treated voices, loudspeaker set-ups, and an interactive troupe of robots on the astonishing 25-minute composition which opens the record. Voudouris provides concise notes in the booklet, and a cursory skim reveals he is brimming with strong ideas about language, emotion, psychology, and contemporary society. Unsettling, uncomfortable music with a rigorous core of steely intellect; what with the alienised processed voices and the general sense of malaise abiding here, I would guess that label boss Al Margolis recognises a kindred spirit and some musical parallels akin to his own If, Bwana endeavours. Very good!

Another record which, tonight at least, is managing to exert its mesmerising force through ebb and flow and minimal radiating throbbage is Erosions (AURAL TERRAINS TRRN0413) by Lutnahimat. This is a one-man project by Ian S. of London who, with the minimal music and minimal information available about his life, preoccupations and intentions, manages to project an image of staring-eyed hermitry and dedicated study to his craft, which I like. Quickly growing bored with conventional instrumentation and compositional methods, he has devised his own electronic music instruments whose inner workings are known only to him. Though he’s not in the same league as David Tudor with his vibrating boxes (and who is?), Lutnahimat’s 20-minute ‘Snow in Hadal Zone’ here is one of the most affectingly ‘blank’ examples of this genre of music that has crossed our desk for some time. Even recent submissions from Raster-Noton seems positively raucous in comparison with this laid-back, evilly-humming introverted rattlesnake of electric drone. Field recordings from India and Africa feature elsewhere on the record, but so far for me nothing licks the intensity of ‘Snow’, conveying the effects of bad drugs and being stranded by bad weather inside a dingy bedsit with a gas fire for company. A nice mysterious item; I must check and see if I was ever sent any of his previous releases on Entr’Acte.