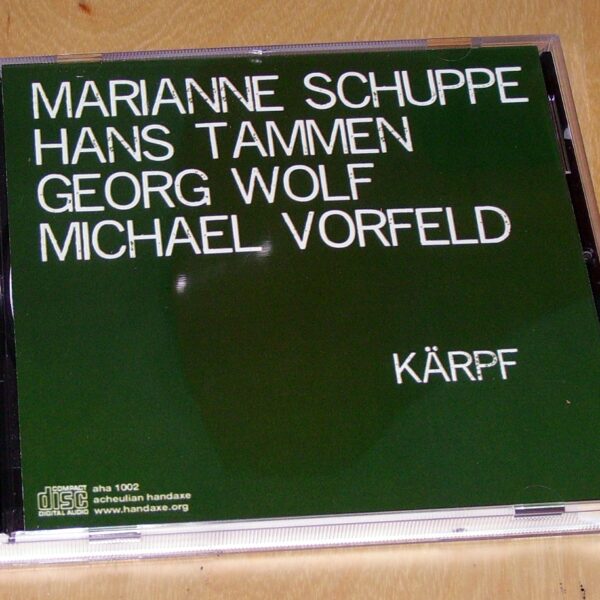 Splendid album and a fascinating inventive approach to four-piece acoustic group improv on Kärpf (AHA 1002) – one of three new items we got recently from Acheulian Handaxe. The four players don’t seem too hurried about rushing into one of those familiar improvising situations where all play at once and are determined to scrabble up the atmosphere with scrapey strings and where percussion is used largely as a battlefield preparation. Instead George Wolf (bass) and Michael Vorfeld (percussion and string instruments) use odd and isolated sounds, and quietly delineate unusual abstract spaces where every horizon is tilted sideways and each man must fare as best he can, balancing on stilts or springs as the occasion demands. In this zone, the “soloists” (and I use the word ironically) Hans Tammen contributes his “endangered guitar” and the vocalist Marianne Schuppe drops in urgent spoken mutterings, perhaps using the German tongue, as rapidly as any sewing machine can patch up your sports coat. The effect of all this, particularly on the longer tracks, verges on the surreal – when you play this you get more than just an unusual combination of sounds, and the very atmosphere seems charged with genuine mystery, as though all four were facing a smoking gun to the west and a hangman’s noose to the east. This release is renewing my interest in the notion of “dynamic space” in performed music, and a greater sense of co-operation among musical players I doubt I shall meet again in the next 48 hours. Naturally one would love to know more about the precise configuration of that “endangered guitar”, but when a man is bringing home the musical bacon in such fine style as this, I deem it unwise to ask questions about the providence of such bounty. Arrived here 12 July 2011. The other two in the box are by Mario de Vega and Chamæleo Vulgaris; will get to them in due course…

The German label Gruenrekorder is of course home to many fine examples of field recordings and related sound art, but this new one by Tom Lawrence ought to win some sort of award from whatever papal body or other officiating body in Western Christendom decides such matters. Water Beetles of Pollardstown Fen (GRUEN 087) is an ambitious, meticulously documented and radical work, which aims to set high standards in this area and at the same time reveal new aspects to the hidden worlds of underwater life. Lawrence presents, in stark documentary style, numerous communication systems taking place among insect life, and provides detailed notes with his interpretations and analysis of what these sounds mean. 70 minutes, ten recordings – compressed down from much lengthier periods of recording, study and research. Lawrence aims to create something that “breaks with all our preconceived notions of what underwater life should sound like”, and has received support from various archival bodies, educational institutions and national parks, as well as noted individual practitioners in the field (Chris Watson among them, natch). Even the chosen site of study is important from an ecological and conservational standpoint, and these areas too are well understood by Lawrence. Of course I know next to zero about entomology or any of the other subjects mentioned above, so can’t really assess the deeper value of the man’s work here, but I sense this release will represent a benchmark of achievement in the genre of field recording, to say nothing of the ideas that are packed into these pages of notes. Might I also add that the disc sounds absolutely fantastic and I can’t recommend it enough – it is a total triumph.

We did hear Pascal Battus on a fine Potlatch release in 2010, where on Ichnites he played his “rotating surfaces” alongside the alto sax of Christine Sehnaoui Abdelnour. But he also works with an amplified guitar on a table setup which makes judicious use of contact mics, and some percussive objects which also find themselves in his grasp, and it might be those we are hearing on this double CD set (CONCRETE DISK 1102-2) we got from Malaysia in June. Two suites hereon, of which Simbol comprises three very long metallic droneworks which may seem subtle and impressionistic at first, but are in fact rich with teeming variations and fathomless depths. At times, these coruscating drones reach pitches no man should face alone, so bring a good suit of polished armour to this aural joust and ye may win. As to L’Unique Trait D’Pinceau, it’s quite a different bucket of crabs – five impolite, noisy and fractured workouts, of the mode which resembles gigantic rubber-bands being force-fed into the mauling mitts of two giant bears. Also some percussion music, and some more high-pitched droning; the determination of this man to wear down the process of his process art until it transcends its own methods is nearly superhuman, and he takes minimal improvisation out of the bus garage and brings it to your doorstep where it belongs, like three pints of milk. He chews ideas away until, like a mouthful of bubble gum, they yield to the force of his brain and his strong musicianly hands. His sleeve notes speak of heuristic chance methods, operational chains presenting themselves in the act of playing, complex synergy and innumerable parameters; Battus is a muscular grand master in this field, wrestling with musical theory and ideas through the very physical actions of manipulating his devices in intuitive and imaginative ways. Buy now to hear more of this ‘percussion verticale’. Fine release of art music, with great Strom Varx artworks on a triple-gatefold digipak.