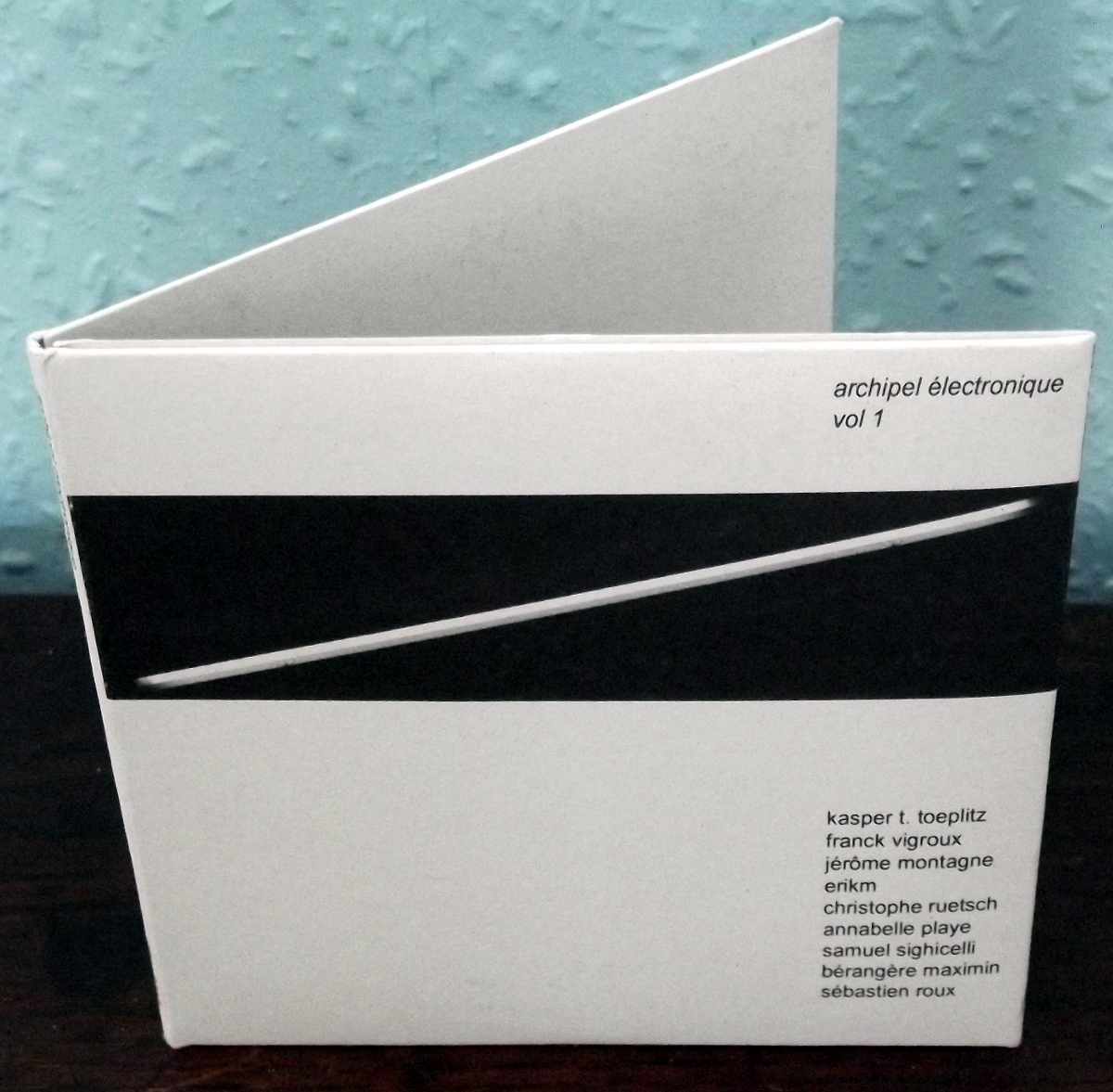 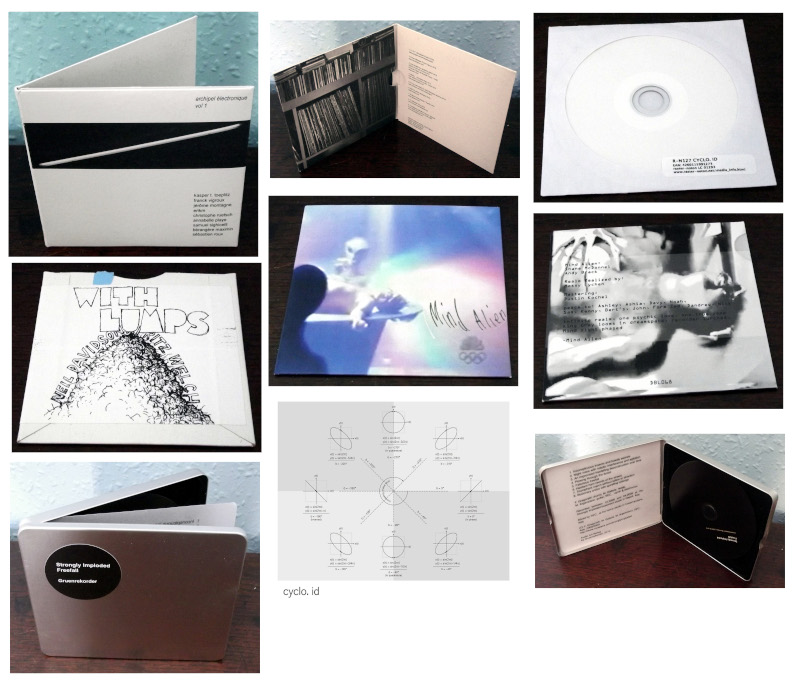 Archipel Électronique Vol 1 (D’AUTRES CORDES DAC 2010) is a compilation of contemporary French electronic music put together by Franck Vigroux for his own label and showcasing friends, collaborators and label-mates – in fact two tracks here have been lifted from previous DACs. It might be an indicator of the strength of the D’Autres Cordes “brand” that at first spin I thought this was all Vigroux solo work – all the cuts seem to occupy similar dystopian urban zones proposing bleak futures for an increasingly inhuman populace of robot slaves, and the abstracted digital-heavy soundworld is shared by many of the composers. There’s a tremendous aural pleasure to be had from these dense and complicated studio concoctions, where harsh and brittle splinters of sound nestle up against abrasive drones and tuneless murmurs. Some of the many standouts include eRikm, whose ‘Une Canopée Aux Accidents’ begins with an air-raid siren and, after the alarming sensations have subsided, settles down into a semi-calm exploration of the blasted terrain that remains, seemingly populated by the giant cockroaches we are always told will survive a nuclear war. Christophe Ruetsch‘s ‘S.L.O.T.’ dreams of a gigantic evil telephone exchange stealing our souls and relaying encrypted information, not far away from Vigroux’s own paranoid take on contemporary existence. And there’s Bérangère Maximin, whose contribution is a delirious combination of barmy electronic doodling with some scratchy rhythmic overlays on the electric guitar. An affecting, subtle piece of music by Maximin, unlike Kasper Topelitz who opts to express his inner pain with an obnoxious roar of harsh noise wall for eight minutes. Vigroux himself offers ‘France Matraque’, one of his more minimal and despondent pieces whose neurotic tranquillity is constantly interrupted with white-noise buzzes and burrs, strongly suggestive of our privacy being invaded by the forces of authority by any means possible, including telephone tapping and hacking into computers. Also here: Annabelle Playe, Jérôme Montagne, Sébastien Roux and Samuel Sighicelli, completing a strong and exciting comp which probably isn’t actually as pessimistic as I make it appear.

Vigroux probably fears we will all become cyphers in the future; for Cyclo., on the evidence of ID (RASTER NOTON R-N127) this change has already taken place, and their only thought appears to be “it’s about time”. Musicians have been using computer technology to help them create dance music for many decades, but Cyclo.’s music appears to remove humans from the equation completely; this is music as conceived by a binary intelligence, denying the possibility of any error or misplaced element. Like others on this label, Cyclo. make a strong virtue of the clinical perfection of digitally-processed pulsations and hisses, and on the surface this is very pleasing to listen to, assuming you enjoy the sensations of non-musical bass throbs and high-pitched tinklements bombarding your ears like miniature laser beams and cannons. Cyclo. is the “dream team” of Carsten Nicolai and Ryoji Ikeda, who have for a long time been adventurous pioneers in taking digital minimalism as far as they possibly can, both working to their own forms of grid structure, and often resulting in very testing recordings for the listener. This release follows that trend, with its airless precision and remorseless hammer-blow beats following sequences that are almost cruel in their monstrous logic.

For as long as electronic music has existed it seems there’s always been the instant temptation to describe it using metaphors drawn from science fiction, in an attempt to convey the outer-space and alien qualities of the music. I’m sure numerous essays have been written on the matter. Mind Alien, the duo of Shane McDonnel and Andy Brack, make the connection explicit for us on Mind Alien (DEBACLE RECORDS DBL068), a 22-minute suite of bubbling and whooping sounds which may use a lot of analogue synths in its production, but some of its watery and uncertain melodies sound to me like they began life on a rudimentary wind instrument of some sort, such as a whistle or pipe. The evocative cover depicts a hapless alien abductee sprawled naked on the examination table, probably about to receive the requisite anal probing of urban legend; the music however makes the entire strange experience seem rather benign, rather than threatening. This undercurrent is confirmed by references to “psychic love” and “dreamspace” on the back cover.

American percussionist Fritz Welch and Neil Davidson team up for an improv session performing as With Lumps, on this 2009 recording of the same name (NO LABEL) made available as a CDR in April 2011 and noted on the blog of the Glasgow-based acoustic guitarist Davidson, who also plays with the Glasgow Improvisers Orchestra. “With lumps” may refer to the manner in which a true Scot prefers his porridge served, or could be a general philosophical observation on the vicissitudes of daily life – nothing is ever as perfect as we would like it. On the record, we hear some excellent low-key under-performed non-music recorded in real time, all-acoustic noise, and consistently denying almost any sort of familiar reference point to the listener; even hardened fans of improvised music, I would like to think, may struggle to spoon this lumpy music into their music orifice. Rattles, groans and scrapes abound in this dour and gritty monochrome sound-world, presented with very little aesthetic sheen in the recording quality that might make it somehow more palatable. Both players, but especially Davidson, seem to be engaged with a struggle to understand why they even bothered to pick up an instrument in the first place, let alone the more long-term questions of “meaning” and “communication” in improvised music.

The austerity of With Lumps presents me with a somewhat indigestible quandary, but I don’t have that exact same sensation with the improvised music of Strongly Imploded, the Italian team of Gregoretti (drums), Gabola (saxophones), Argenziano (guitar) and SEC_ (electronics), by which I mean their music is much more expressive and outspoken, even to the point of excess. While With Lumps ponder and manoeuvre, Strongly Imploded 1 bring the battle direct to your street corner, picking fights with the local toughs. I see this is the third release we’ve been sent, although Why Use a Proxy? clearly baffled me in 2009; the recent American release Twilight of Broken Machines seemed to work better for me, which is how I ended up revisiting this slightly overlooked album Freefall (GRUENREKORDER GR 073) which I see has been hanging fire since July 2010. Whereas before matters seemed a bit chaotic to me, here the mixed tones of woodwinds, electronics and guitar noise finally start to make musical sense, and at their best the quartet produce a tight bond of mixed sonorities that can be very pleasing, especially when underpinned by the drummer who seems to be providing most of the required subsonics with his bass drums. While the other three drone like angry oxen and bulls, the drummer turns everything into a high-speed Vespa ride through the streets where lives are at stake. I still wish the saxophone player would pull in his antlers once in a while and stop acting like the histrionic free-jazz honker with his obnoxious toots, but when the synth playing and gruff guitar feedback are at their strongest, they manage to smack Mr Saxman in the face quite effectively and he stands in the corner with a reddening face. A band should make their internecine strife work in their favour, and on these 2008-2009 basement studio dates, Strongly Imploded turn their inner implosions and personality clashes into virtues. Gotta love the contrived track titles too, almost like the titles or opening words to short stories. Who could resist a tale which begins with ‘Hesitant ham’?