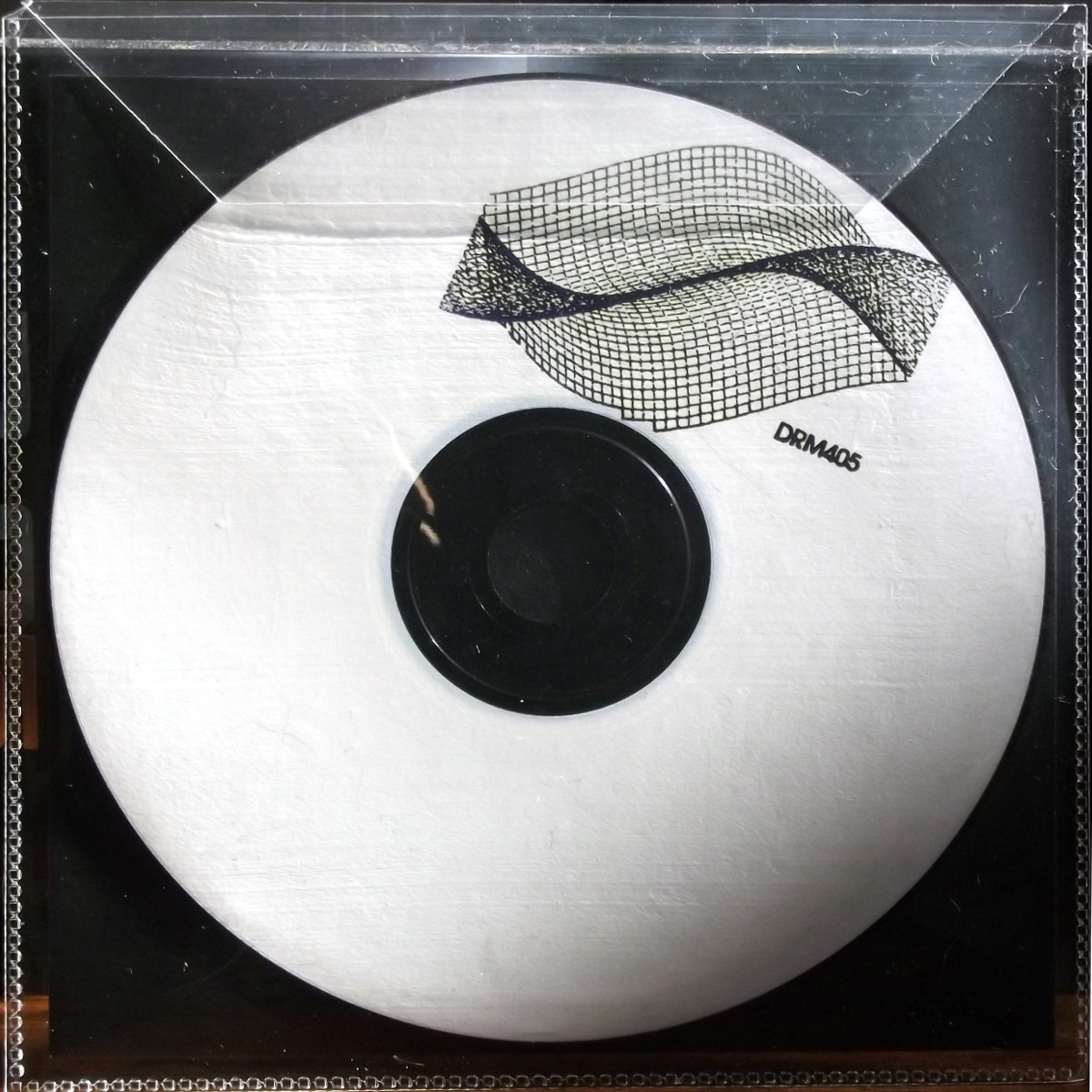 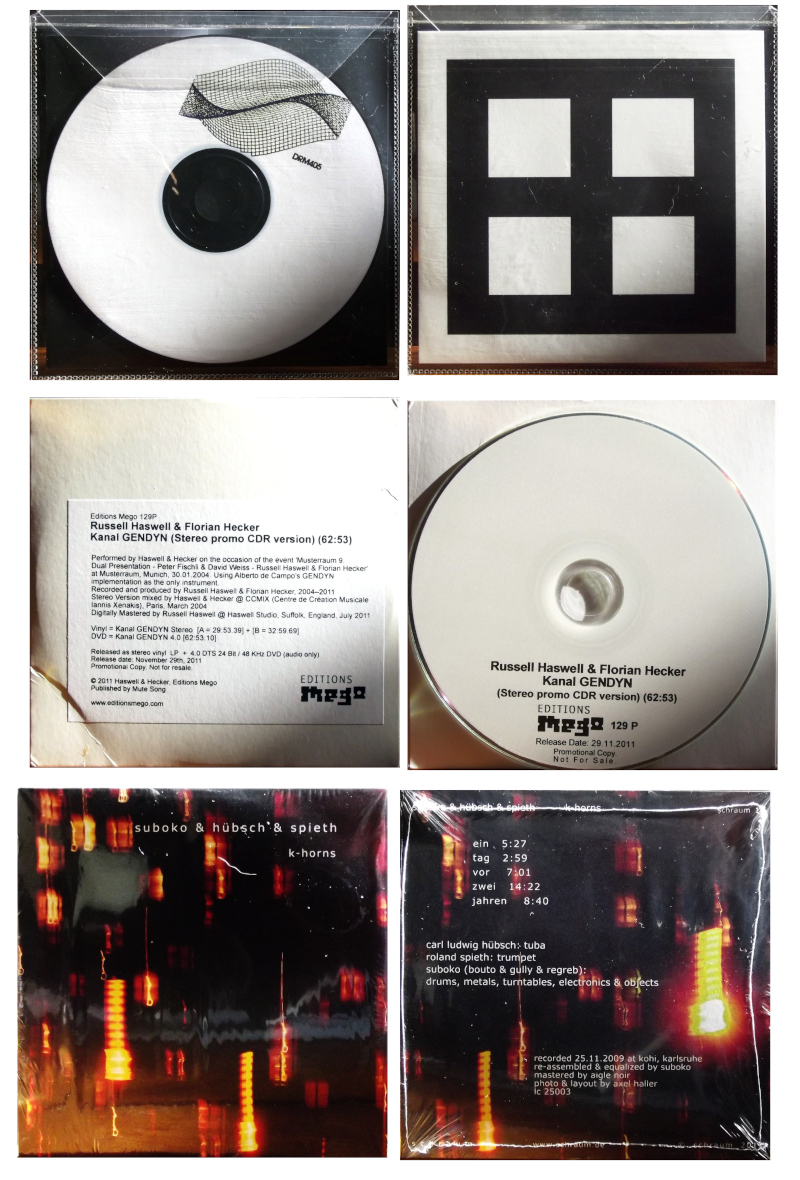 Nice to see your man Reinhold Friedl taking a short break from all that complex microtonal electro-acoustic composition and intelligent renditions of 20th-century avant garde music for his Zeitkratzer Ensemble. Everyone in Berlin was getting concerned that he was spending too much time in front of that computer that translated the double-LP Metal Machine Music into musical notation. His Eight Equidistant Pure Wave Oscillators, While Slipping Very Slowly To A Unison, Textually Spatialised On Eight Speakers, Concret, 60 Minutes (ROOM 40 DRM405) is a monolithic piece of electronic minimalism of the sort that aspires to the condition of pure crystal, or a mountain, or a mountain made of crystal. Flip on your hi-fi amplifier and this disc creates a living, textured environment in your living room as you blast it out of the speakers. It’s timed to last precisely 60 minutes, which is recommendation enough in itself. Friedl’s rigid control of his sources allows this gently pulsating music to vary only according to strict conditions, rather than errantly sliding his filters and twiddling his mixing knobs, and even though it takes a very long time to reveal itself, a clear grid structure is at work here, underpinning these continual emanations like the steel girders supporting the Berlin Philharmonic. The work also has a very pure and clean sound, a sonic superstructure built from the highest of the elements to be found in the periodic table. The label speaks of the music’s “psycho-acoustic” properties, which I take to mean it will have an effect on your nervous system, or at least invite you to ponder what that effect may be; and the fact that, for one hour, it concentrates all your senses into the very act of listening. In like manner, a karate expert can focus all their bodily strength into their index finger by an act of sheer mental will, enabling the use of said digit as a car jack. Make no mistake, Friedl’s cleansing music can empower you to more or the less the same thing with your ears. In fact my own lugs were so stiffened after a session spent with this record, that I’m now thinking of renting them out as marquee tents. Available as FLAC download only (I’m making an exception to the usual rule about these).

Russell Haswell and Florian Hecker‘s Kanal GENDYN (EDITIONS MEGO 129) is also electronic music, also an hour long, but any resemblance with the above record ends at that point. It’s made using the GenDyn program which was originally invented by the composer Iannis Xenakis, as a means of exploring “stochastic timbres” by means of algorithms, and its principal innovation was to allow sound production and composition to become almost instantaneous. I assume that in the field of classical electronic composition, that was something of a breakthrough, especially when you hear these anecdotes about composers in the 1960s labouring for six months just to produce 30 seconds of computer-assisted sound. He began work on it in 1991, and as a computer program that enables composition of electronic music working to a few simple variables, it might be said to predate bespoke applications such as Max/MSP or SuperCollider which do the same things for a laptop user. Alberto De Campo steps into the frame next, the modernist composer who studied at Austria, wrote the user manual for the second version of SuperCollider, and in 2006 produced a concert derived from “sonifications of social data”. This, I assume, would involve the transformation of statistical tables from SPSS or similar database into audible soundfiles, a sort of “pure data” process which seems to have fascinated your laptop types for quite some time. De Campo also collaborates with Hecker and he provided the specific implementation of GenDyn which we hear on this record. It’s a largely insufferable outburst of chaotic spew which starts out sounding like trapped plastic bees in hives made of tupperware, and ends like digital renderings ot atomic bomb explosions. In between this you will hear many inhuman groans, burrs, buzzes, growls and clicking effects – the voice of a computer program mangling data in real time. Relentless, horrifying. The piece began life as the soundtrack to a Swiss experimental film called Kanal Video by Peter Fischli & David Weiss, which is a video exploring the sewage system of Zurich; said visual component may account for the severely claustrophobic nature of the sound on this release. The record apparently marks another stage in the ongoing research that these musicians are undertaking into the ideas and work of Xenakis. Sadly, I find Kanal GENDYN vulgar and coarse, and I can’t reconcile its techno-club inflected harshness with the subtlety and invention we hear on Xenakis’ own compositions. If this stereo version fails to satisfy your thirst for digital noise, then try the vinyl version (that’s right, one hour of sound on a single LP) or the DVD set. Both include explanatory notes and images which I don’t have access to.

Now for some music performed by human beings instead of machines. The K-Horns (SCHRAUM 14) album is very enjoyable and meaty improvised music, a collaboration between two German brass players and a French trio of percussionists called Suboko. All the members have rich histories in the areas of classical music, free improvisation, multi-media, DJ-ing, rock and jazz. The French drummer Pascal Gully weaves many complex networks of steely percussive nets and pounding bass toms, on top of which Laurent Berger (Regreb) adds spiky live electronics and more percussion, and the turntabler Nicolas Boutine (Bouto) lobs in unexpected stabs of crazy source material and random vocal smatterings from his decks. Meanwhile the tuba player Carl Ludwig Hübsch roars forth like an angry rhinoceros, grumbling up huge clouds of dissonant avant noise from his outsize bell. He’s my favourite player on the album, extemporising much like a genial academic professor booming away with benign authority in the auditorium. Roland Spieth, trumpeter to the gang, mutates his melodic bent into warped plastic shapes which melt around everything like multi-coloured macaroons. You’ve never met such slippery tones and wobbly lines outside of a De Kooning painting. There’s also tremendous volume and depth to these muscular 2009 studio recordings made in Karlsruhe, with none of your wimpy micro-tonalities or wispy sounds – just good old-fashioned frantic percussion clatter and thud, full-bodied brass puffery, and the exciting buzz of amplifiers set at high levels. It’s as dark and golden as the cover art almost manages to suggest – autumnal bites into plain chocolate flavoured with marmalade. My personal favourite tracks include the non-stop atonal japery of ‘Ein’ and ‘Zwei’, even if the combo do occasionally settle into an all-purpose drone-along groove on the latter cut; but the ‘Jahren’ cut, while quieter, allows for further exploration of the possible textures available in this unusual set-up, emphasising the breathy aspects of the brass section. ‘Vor’ is another strong track and showcases the chaotic, fun-loving aspect of this group, Bouto has a field day playing hob with his spoken word recordings, and the other players go for broke in an all-out explosion of parping, drumming and scattering about like crazed lizards. When I found a photo of the group making this record, it was almost a surprise to see them all sitting down, as the music conveys such strong sensations of movement and energetic activity. I’d use this for an exercise workout if I could be bothered to get out of my armchair once in a while.