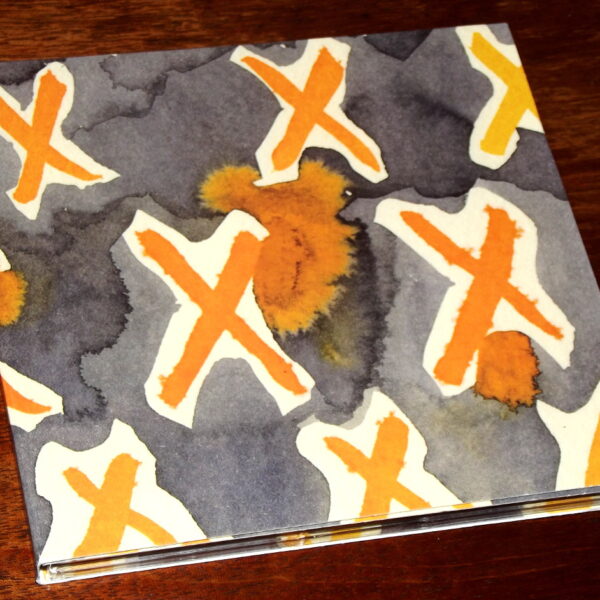 Fukushima! (PRESQU’ILE RECORDS PSQ004-2) is a compilation themed on the Japanese nuclear disaster of 2011, caused by an earthquake and leading to multiple reactor meltdowns. Otomo Yoshihide went on a lecture tour to raise awareness, and his appearance at the University of Tokyo in April 2011 was the direct inspiration for this two-disc set. I would imagine that Otomo gave a very direct, honest and impassioned account of the situation, if his music is anything to go by. He doesn’t appear on the compilation, but there is much modern avant performed music to savour. Disc two is dominated by star players from the Berlin reduced improv sphere, notably Burkhard Beins, Annette Krebs and Ingar Zach, plus similar minimalists Mark Wastell, Greg Kelley and Michael Pisaro. Their accumulated tracks put the listener in a suitably sober mood, and are politically contextualised by Krebs’ field recordings of a Berlin street demonstration. The main event is on disc one, a 34-minute John Tilbury piano solo from a composition by Dave Smith. It’s like listening to a very coherent argument made by an intelligent and assured wise man, which is exactly what it is. There’s also some alarming tones from Magda Mayas and a superbly baffling performance from Joe Foster of English with the Korean players Jin Sangtae, Hong Chulki and Choi Joonyong. Overlong, uneven, but this fund-raising comp is in a good cause. (19/07/2012)

Psykisk Tortur are the Norwegian combo, currently down to a duo of founder member Nicolaysen and Ronny Waernes, missing original member Tore Nilsen. When these maniacs began their unholy career in 1984 they became notorious for physically dangerous performances involving industrial machinery and metal percussion, thus aligning themselves with the early Faust, Hanatarash, and Einstürzende Neubaten – and although I’m not sure if the Norwegians ever succeeded in destroying any venue in which they played, they were certainly in receipt of numerous banning orders and they never ate lunch in Bodø again. On Nightrider (GO TO GATE RECORDS GO TO CD 022), their intense noise has mutated into a grotesque form of heavy metal rock, where mad electronic gibberish takes the place of squealing guitar solos, and the drumming is every bit as intense as a thousand Slayer tribute bands. It’s especially memorable when a “song” is attempted, as on ‘Stille Er Morgen’, where the monotonous chant is solemnly intoned against an insane cataclysm of heavily-distorted amplified wildness and remorseless drumbeats. Those who crave more outright “experimental” noise are advised to spin ‘Lettmetall’ to experience the more free-form tendencies of this powerful team, while rest of album is sufficient to satisfy any crazed Napalm Death fans. Very percussive and metallic throughout; the album virtually builds an iron suit around your whole body while you wait. As Robert Pepper astutely noted, “Psykisk Tortur rules!” (06/07/2012)

Matt Earle is an Australian musician and label owner, who has improvised with Guthrie and Guerra in his home country and recorded electronic music as part of Stasis Duo. Muura is his solo outlet, and the object simply titled Tape (ORGANIZED MUSIC FROM THESSALONIKI T19) is a cassette of process drone music that crawls from the speakers like over-baked ectoplasm escaping a desert climate. It’s built up from layered recordings of by-products of the electric guitar, including amplifier hum, feedback, and other “mistakes” generally considered undesirable by normal men. From this swamp of friable material, Muura impressively manages to build a hefty brick wall – a compelling experience of solid, throbbing abstract sound. The B side may have employed the same processes, but is somehow hollowed out and subtracted to create an extremely bleak and negative effect. Ultra-drone. (19/07/2012)

We last noted the Irish noise duo Safe in late 2010 with their Bare Life release. Now here’s their fifth item Crop (DOTDOTDOT MUSIC DOTDOTDOTCD010), where Hegarty and O’Shaugnessy supplement the group with four collaborators who add guitars, synth and toy instruments to the melee on this live recording. And it’s a continuous 40-minute assault, so civilians should approach this toxic area with caution. What may appear at first to be an indistinguishable howl of unpleasant frequencies slugging it out inside a tight arena of hate will reveal itself to be much more complex, and as deep as an aquarium filled with unusual marine life. The usual relentless Merzbow-chug power blast which Safe favour has been slightly subdued to act as a rhythmical backdrop to the instrumental lines of Langan, Condon, O’Brien and Lynch, guitar and synth eruptions which mew most plaintively. When you get this many noiseicians gathered together in a live situation, it can sometimes be a guarantee of unlistenable, sloppy chaos. But the musicians here reverse that trend, cohering strongly and sustaining interest unflaggingly for all 40 minutes. (24/07/2012)