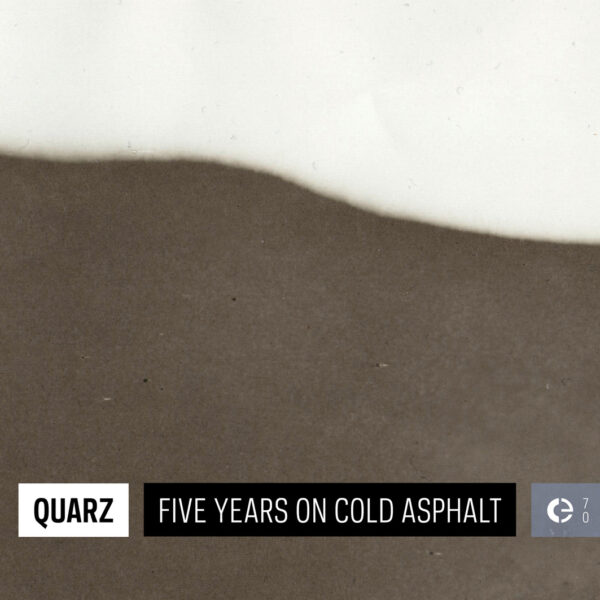 It’s more than likely that the only time I’ve ever come across product from the Portuguese Crónica label was back in 2009 with a peculiar strand of sensual electronica, in the willowy form of Erotikon by The Beautiful Schizophonic, which delivered a reassuringly human touch, instead of the usual clanky, cold metallic feel of a poorly articulated claw hand. A great release for sure. So there were high hopes in spadeloads, when I received one of the more recent outpourings from the house of Crónica; namely Quarz‘s Five Years On Cold Asphalt, which effectively blurs the distinctions between live and studio and improv and scored audio. A collective of some seven years standing, that’s masterminded by Austrian composer Alexandr Vatagin (also with Tupolev and Post-Royal), who beachcombed diligently for other like-minded individuals and guest empaths along the analogue way. These include electronicists Nicolas Bernier (also of Radian), Stefan Nemeth (Lokai) and Alexander Schubert (Sinebag) to mention but three. Five Years… is a thirty-four minute exercise that actively resonates with methodically constructed studio strategies in pre and post production. The gist of which is that the recordings of player three are a reaction to the output of players one and two and so on. A kind of pyramidal recording concept I guess. This approach surprisingly, avoids an expected scattershot tableau and instead reveals a pleasing example of organic mid-period AMM’isms captured in a widescreen Mille Plateaux styled setting, replete with bowed cymbals, drawkcab tapery, amorphous field recordings and keening, gently screechy electronics. As a p.s., I could’ve easily stood for an extra twenty minutes or so…as the exuberant percussives of Bernhard Breuer come in and are ushered out in what seems to be double quick time. Now that’s no way to treat a guest (drummer)!