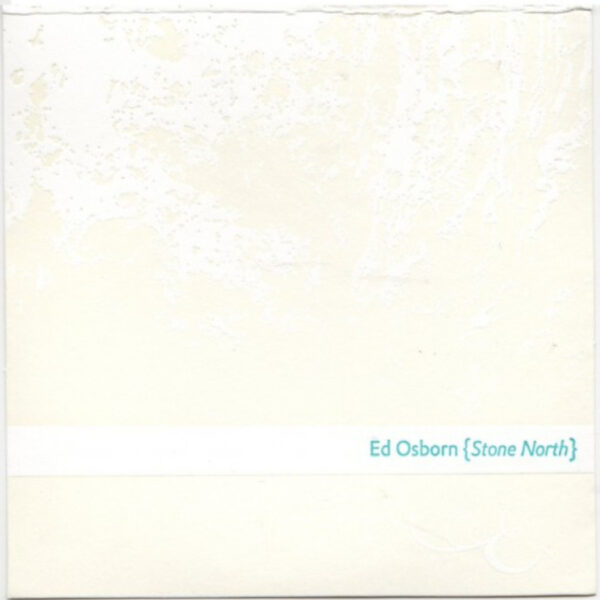 Three pieces spanning twenty years from this Providence, Rhode Island-based recipient of a DAAD Artists-in-Berlin Stipendium and a Guggenheim Fellowship. I’ve gleaned little useful information from the biography on his website, as it is full of deliberately facetious and extremely dubious “facts”. Osborn, I am assuming, would describe himself as a sound artist. The first piece on this collection, ‘In Memoriam Elisha Blakeman & Tabitha Babbitt’ (1992) holds a surprise – and this is a new one on me; a piece of music performed on “electric skis” (no gimmick this, surely?). You can practically hear Osborn sniggering up his sleeve at this point. Presumably [deep breath] a pair of skis liberated from the slopes of Chamonix or some such top-flight winter sports destination, strung possibly, and then contact-mic’ed so that Ed Osborn and partner in crime on this piece, Brenda Hutchinson, can wreak havoc upon our senses. We are told that back in the 1980s, Osborn played in an ensemble of some notoriety (perhaps in Osborn’s own head): Ski-A-Delics, who troubled Boston gig-goers with performances on multiple single-string-equipped skis. These days, he exists in a more sober position pursuing a teaching career; currently he is a tutor at the Visual Arts department at Brown University in Providence, having previously taught at institutions in Boston, Oakland and Santa Cruz.

Tabitha Babbitt, of the Shaker faith, is the probable inventor of the circular saw in 1810 (along with other inventions credited to her), and Elisha D. Blakeman wrote The youth’s guide in Zion: And Holy Mother’s promises, given by inspiration at New Lebanon, N.Y., January 5, 1842. But where skis fit into the scheme here is beyond me. Wikipedia throws a small patch of light on the proceedings: “Isaac Newton Youngs (July 4, 1793 – August 7, 1865) was a member of the religious organisation Shakers. He was a prolific scribe, correspondent, and diarist who documented the history of the New Lebanon, New York Church Family of Shakers from 1815 to 1865. Two members of his society described him as a genius. One of his students, Elisha Blakeman, wrote that Youngs’ mechanical genius was remarkable. He could turn machinist, mason or anything that promoted the general good. Many conveniences, which added so much to Shakers’ domestic happiness, Blakeman concluded, owed their origin to Youngs”. So, it’s clear that in referencing Tabitha Babbitt, Osborn is attempting to make an observation on how prevalent gender prejudice still is, although I have yet to ascertain the significance of Blakeman – there’s no further information forthcoming from Osborn himself.

The sounds on ‘In Memoriam…’, although unremarkable, are nonetheless extremely pleasant to relax to. The range of the instrument is wide – keening high pitched and almost cymbal-like splashes of colour reside alongside powerful bass tones like the depth charge let loose to begin the track. Those expecting a lot of filigree detail might be disappointed however. There then follows a sadly predictable five minutes of unsurprising bowed sounds which are followed swiftly by the next piece.
‘Guitar Mechanical’ (1989-92), a composition for guitar, which is a collection of tics, jitters and fluffs, culminating in a process of agitation which ends with the guitar flapping about on the floor on its back in its death throes. It all goes very quiet here, mastering wise. The sleeve states “guitar and pickups” as the instrumentation but I’m not sure if the guitar in question is acoustic, electro acoustic or electric or if the pickups mentioned are the instrument’s own or additional units and if so how many, and so forth. Apologies if I’m boring you now but I’m quietly interested in this sort of thing. The track increases in volume with no small amount of stereo agitation which makes it sound to me like being in a flight/passel/kit of woodpigeons at the moment of take-off and road-testing some exotic new type of dynamic gate processor simultaneously. In the unlikely event that this may actually be true, I’d recommend the manufacturer call this new product a “Flim-Flammerer” in case they are stuck for a name. ‘Guitar Mechanical’ (1989-92) continues in a distinctly metallic / magnetic way, the stereo playfulness outstaying its welcome somewhat.

The third offering from Osborn’s personal archive is ‘Stone North’ (2009) which is like a fan with worn bearings or a bladeless circular saw (Tabitha Babbitt’s influence again?) attempting to engage with a concrete lintel. Alternately, you could consider it as a moving tone experiment. The guitar appears to be activated by a rotary device of some kind, maybe a second hand Wankel petrol engine out of an old Mazda, and its resulting output amplified and processed by unspecified electronics.
These pieces all suggest this question; there’s a lot of people who’ve seen Keith Rowe at some lavish European festival recently now making their own records with detourned guitar, but who is actually buying them? Its sounds like as the years have rolled by Osborn’ s ideas have become more and more compressed and specific, which is all well and good, but I found that it was all diminished slightly by his own over-use of mockery, which could be seen as somewhat juvenile, in his online presence. However, his achievements are many and varied and can be investigated here, so perhaps his biography is intentionally specious, reflecting its superfluousness.