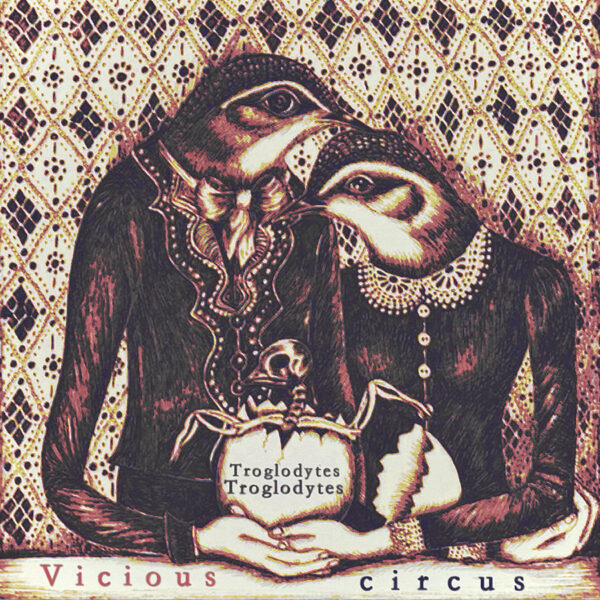 Nothing to do with cave-dwellers, the Troglodytes troglodytes alluded to in the title is the Wren – a bird described by the British Trust for Ornithology as “tiny, restless and pugnacious”. Which would also be a good description of this CD from East London improvising duo Vicious Circus.

Twenty pieces for your consideration, then, played with maximum attack by Elo Masing on violin, cello, electric guitar and whistle, and Dave Maric on the “daveOtron”. Admit it, you want to know what a “daveOtron” sounds like, don’t you? It turns out to be some sort of synthesizer, possibly home-made, that shrieks and whoops and oscillates and flings out great daubs of vintage-futurist sound. If there are clowns in this Vicious Circus, here are the custard pies.

Joining Elo and Dave are David Turay on alto sax, and Matthew Lee Knowles, who provides spoken word interludes on three tracks. Two of these are about the interesting properties of numbers, the third – “This Is Fluxus” – is a rapid-fire ranting babble apparently constructed from snippets of conversation overheard at a Tate Modern exhibition.

Throughout, the violin keeps up its lopsided Gypsy frenzy and the electronics lay down the soundtrack to lost sci-fi horror shows. You could even be deceived into thinking that some of it is danceable, until you realise that your legs would need extra joints that bend at unnatural angles.

At this point, you may have gathered that Vicious Circus don’t really do subtlety. This is full-on, no-holds-barred stuff – but isn’t that the whole point of free improvisation? Also, and this is important, it sounds as if they’re actually having fun and enjoying themselves. Whatever next?

Returning to the titular Troglodytes troglodytes for a moment, one of the most remarkable things about the Wren is just how loud it can be, for such a small bird. I once took a boat trip around Skomer Island and was amazed to hear the song of a Wren sounding out across the water, cutting right through the cacophony of literally thousands of seabirds. Troglodytes Troglodytes the album is like that. A trilling, buzzing, partly melodic thing that will cut right through the cacophony of your day and demand to be heard.

Step right up, as the circus folk say, and enjoy.