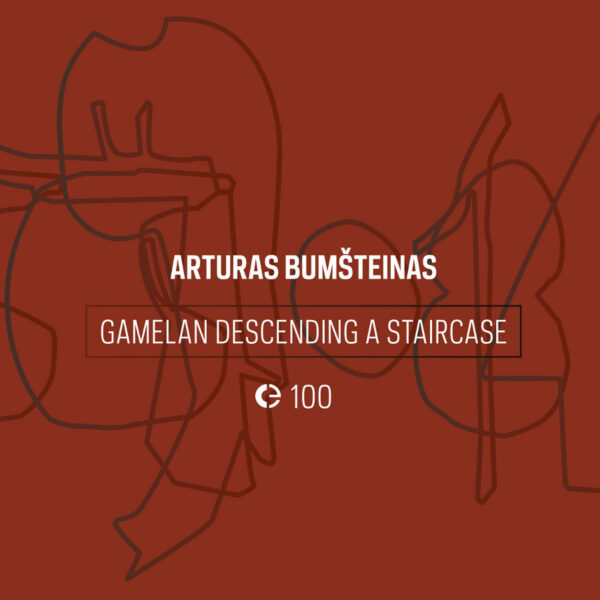 Last noted the Lithuanian composer Arturas Bumšteinas in 2014 with his Epiloghi, an ingenious construct which made connections between theatrical sound-effect making machines and the work of the Italian Futurists. His new release likewise confirms that he’s visually literate and informed about the history of art; it’s called Gamelan Descending A Staircase (CRÓNICA 100-2015). He is intending an explicit link between this 50-minute composition and the 1912 painting by Marcel Duchamp, although it’s a not a wholly conceptual link; it came to him in a dream, a vision…he had the fanciful idea of a Gamelan orchestra falling downstairs. In some ways I wish Bumšteinas had pursued this original fancy and staged such an event, even at the expense of injuring himself and some fellow musicians and causing permanent damage to the instruments…it reminds me of John Cale’s irresponsible idea for pushing a piano down a mineshaft. Some ideas are probably better not executed.

I seem to recall that Duchamp’s original painting did contain the idea of expressing movement within a static plane…trying to respond to this visual challenge, a new challenge posed perhaps by motion pictures…but he also ended up fracturing his representation of the human body in some way, as he attempted to see all the way around the figure as it curled around the stairs. He even added what a cartoonist would call “speed lines” or “motion lines” to indicate the movement of the body. What you see in the painting is an attempt at three-dimensional seeing, flattening out several visual events onto a single image. Picasso and Braque had tried to see all the way around static objects in their Cubist paintings, but Duchamp was out to capture movement. From this fine art lesson, Bumšteinas draws two conclusions; the fractured representation of Duchamp’s nude becomes “deconstructed micro-forms and the study of sound structures” in his music here, and the idea of forward movement becomes “progressing in slow motion, without a clear point of destination”.

With these concepts in mind, one should probably hear Gamelan Descending A Staircase as an experimental piece of sound art, rather than the document of a performance. The original recordings have been composed and assembled by Bumšteinas; he wants us to hear tiny, splintered fragments of percussive sound, multiplied into Cubist-like forms by his editing and overdubbing process. Yes, actual Indonesian orchestral instruments were the starting point – he recorded them at the Ethnological Museum Dahlem in Berlin in 2013 (apparently with the help of one Raminta Atnimar, whose palindromic name is a little too good to be true) – but the finished work has very little to do with the history or ethnicity of these instruments, I suspect. The lustre or resonance of the metallic instruments has been sacrificed; what remains is a mosaic of percussive information passing by at some speed. At any rate, he’s probably less interested in Gamelan as Gamelan than Philip Corner, Debussy, or even Harry Partch. There was a live première for the work at the Jauna Muzika festival in April 2015, where he added three improvising trumpet players to a playback of the pre-recorded Gamelan tape. I have no idea if that intervention added anything of value to the music, but I like to report these details.

The idea for this project is certainly intriguing, but the record isn’t an especially compelling listen somehow; at 50 minutes it feels like stretching a simple idea a little too far. However, I do like the strangely jumbled feel to the surface; the instruments stand on the verge on creating an incoherent, overdubbed mess, and as a whole work it does indeed succeed in conveying the sensation of chaotic forward movement towards no apparent goal. Maybe this is the composer’s gentle statement about the futility of contemporary life; for all our busy-ness, we’re getting precisely nowhere. From 26 November 2015. If you buy the digital download, you get an extra track ‘Sad Young Man On A Train’.