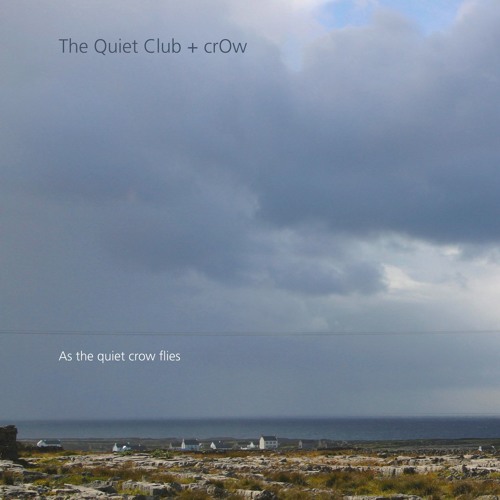 As the quiet crow flies (FARPOINT RECORDINGS fp058) is a team-up between two Irish improvising duos – The Quiet Club, and crOw. As far as I can make out these four guys know each other quite well and the record came about after the four of them were forced indoors during a terrible storm in 2015. The notes stress the warmth and friendliness of the situation, “an unexpectedly free evening in each other’s good company”, failing only to mention the possible presence of a bottle of Jameson’s hard by. It is this warmth which emerges on the record, a continual piece of improvised music some 33 minutes long. All four of them play in the so-called “electro acoustic improv” mode, by which I mean there is use of amplification, e-bows, effects pedals, loops, and live electronics, taking place alongside the acoustic elements which include stones, objects, toys, and the alto saxophone of Cathal Roche. If you were expecting a portrait of the 2015 storm – most likely they are referring to “Storm Frank”, which caused horrendous damage sweeping cars into the sea and leaving many homes without electricity – you may be slightly disappointed by the quiet and understated music in these grooves, which is a slow and thoughtful exploration of sonic interplays and long tones. However, the packaging is extensively decorated with evocative photographs (by Doreen Kennedy) of landscapes, grey clouds, and skies, and the listener can’t help but hear echoes of weather and oceans (and the cries of seagulls) in these abstract sounds. This may indicate that these players, unlike some more recondite EAI players, have not lost sight of some basic truths which help to root their work in the real world, and they’re not afraid to tell stories in their music. This is refreshing; one gets tired of all that non-associative music, which often ends up blank and empty, and As the quiet crow flies is bound to connect to any human being who has travelled overseas, gone for a solitary walk on the hills, or even simply gone outside. Limited to 500 copies, from 19th September 2016.