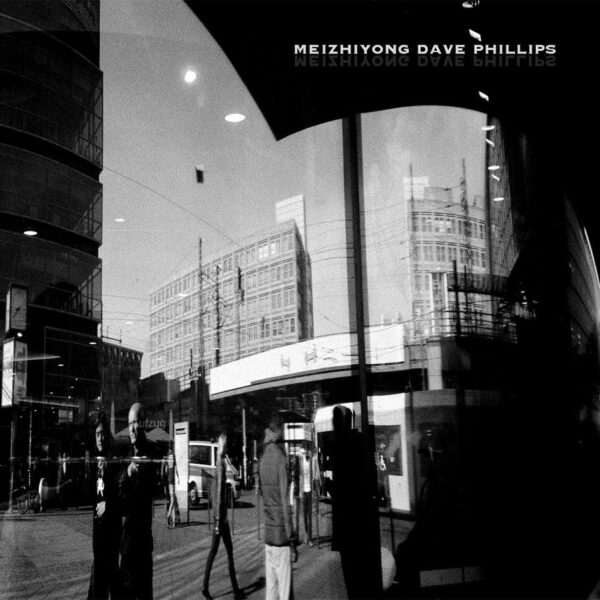 Schimpfluch Gruppe’s prized Humanimal-Aktionist Dave Phillips needs no introduction round here, though Mei Zhiyong – his confederate for this collaboration LP – may be less familiar to SP readers, which didn’t stop him racking up kudos in 2014, when he organised a tour of China for/with Herr Phillips. Live videos show the man to be a beast behind the mixing desk, pumping out torrents of effluent noise that could pass for that of ‘80s/’90s scum-noise-mongers such as Hijokaidan, Incapacitants or even Otomo Yoshihide on a strident night. This LP, a typically Schimpfluchian cut n’paste montage, is sourced from slivers of the Sino-Swiss double-act’s subsequent, 20-city rampage across Europe in 2015, which must have left audiences breathless and Phillips with much to wade through while editing this monster.

First thing out the window is linear time: the record obliterates any sense of what happened during these shows, but in its warped continuum of sudden shifts, subdermal explosions, subterranean drones, dulled voices, animal growls, and occasional sonic pixelation as Phillips zooms deep into his materials, offers some idea of the audience’s disorientation. The prolific Phillips’ probably threw this all together on the fly, filleting his digital archives of tasty bits as he gave them the once-through; burnishing the sum into a ferocious form of electroacoustic wizardry without wasting a moment. Hewn of fat, flatulence and dead air are the visceral shits and giggles, leaving only muscle and menace: an approach eminently preferable to even a highlight-cuts compilation, much less the bloated live document format. For this we are eternally grateful. Between 2013-14, well-commissioned radio producer and sound artist Gilles Aubry took to Morocco’s in-between spaces to collect and process the recordings he went on to map out this 38-minute composition or ‘sonic exploration of Berber-Amazigh voices and instruments, rhythms and spaces’ as the literature has it. The Berber are an Afro-Asiatic (but largely Islamic) ethnic group dispersed across Northern Africa, with concentrations in Morocco and Algeria; their languages a blur of related autochthonous tongues under the Tamazight umbrella. Reasons for Aubry’s interest in the group are unclear, but what distinguishes this recording is its distance from the motifs, the vigour and the verve one might expect from a part of the world so frequented for its sense-sharpening music. Indeed, hot countries are not usually known for such introspection. However, behind the curtain of our thwarted expectation, we may, perchance, bear witness to the titular ‘mystery’.

Much like the expansive sound collages of Sublime Frequencies (and as far back as the proto-collage on Sun City Girls’ Low Pacific), And Who Sees The Mystery is both an excursion through and remote from from the standard issue sound sources encountered in field recordings and fixed-medium electroacoustic both. It openly trafficks in faintly-familiar fragments (street sounds, bird calls and rousing musical performances), binding them with the dissonant yet adhesive properties of ‘performative’ feedback and a recurrent drone that tints everything it touches, till the whole artefact succumbs in time to sonic degradation: tape corrosion, piercing feedback and the dust of field recordings that demands cognitive reparation for our audio tourism. Neither travelogue nor scrapbook, the record is more of an interior tapestry of nameless voices echoing through the darkness of either an alienating reality or dispassionate dream world, at least inviting the listener to ruminate upon this strange, fictional realm. Berlin’s Andi Otto first touched our radar in 2014 with Where We Need No Map, under his Springintgut monicker – a lightweight deck of beat-driven backpacker postcards from all corners of Asia. He followed this with a fine collaboration – The Bird and White Noise (with F.S. Blumm) – an uplifting ‘travelogue of naturalistic melodies’ that I have turned to in many a time of Too Much Dark Ambient. His current self-image is of an ethno-beat maestro of the Four Tet/Daphni school, who crams the channels with suave string samples, modular whoops and warbles, and selectively swiped Asian girl vocals doing loops around slow-burning deep house and dub rhythms.

With more in the way of a blissed-out Buddha Bar vibe than ‘Map offered, tracks like ‘Dub For Ian Waterman’ balance eye for detail with ear for delicate melody, though this is an exceptional instance of a build-up leading to a payoff, where many other tracks level off to a predetermined pace and stay there. The effect of this is that for all the variety of content, identity quickly becomes homogenous. Besides, Four Tet perfected the art of middle-class beat-smithery with his Morning / Evening record in 2015. Thus, while clearly a talented producer, Otto and his skills might be better off in good company.