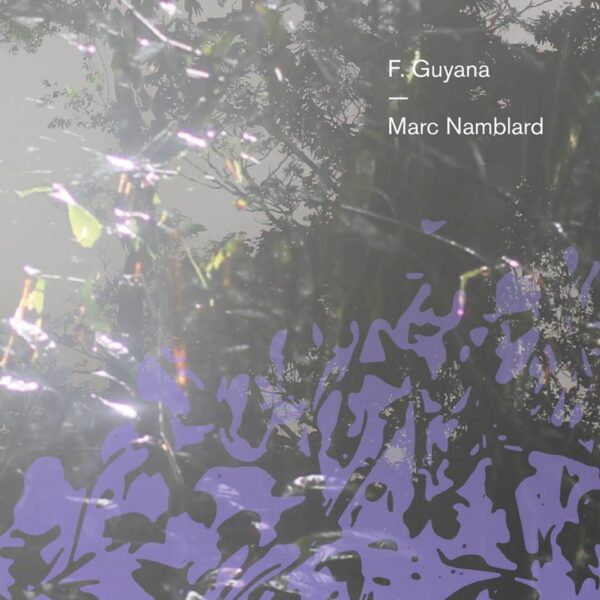 Two recent field recording releases from Gruenrekorder, the German label that offers unparalleled high quality releases and packages in this genre. Both albums are presented in soft digipaks with booklets of full colour photographs, complementing the sounds. Both from 12th June 2017.

Marc Namblard recorded F. Guyana (GRUEN 175) in French Guiana, on the coast of South America. Three years of effort were spent in capturing 11 distinct episodes, featuring the forest and coastal wildlife – birds, monkeys, frogs, insects. Parisian-born Namblard was drawn into the field of nature recording from a background in fine art, and has been doing it since 2000. He’s found employment applying his skills as an “environmental educator for popular education organisations”. He often finds himself pulled in two directions with each project, sometimes following logic and sometimes just trusting his instincts. This particular release is educational to the extent that the recordings are annotated with brief paragraphs noting the location, the wildlife, and explanations of what’s going on. I would characterise it as a work of great beauty and subtlety, realised with sensitivity and intelligence by the unobtrusive techniques of Marc Namblard. A serene and relaxing listen is guaranteed. Katharina Klement may be more well-known to many as a contemporary classical pianist, and indeed many of her solo albums of piano music can be found on her own KalK label since 1996, although she’s also represented on the Austrian label Extraplatte. On Peripheries: Sound Portrait Belgrade (Gruen 173) she’s demonstrating her very able skills in the genre of documentary / field recording, and unlike Namblard she’s concentrating on an urban area for inspiration and sounds. Indeed she has explicitly set herself a challenge to convey the truth of this city with her microphones, or to use her own words: “what does this city sound like? Is it possible to portray it using sounds?” Her own response was comprehensive, to say the least. She not only recorded sounds of Belgrade, but interviewed the locals, building up what she calls an “acoustic archive” over a period of nine weeks. But it wasn’t just about sound; through her peregrinations, she found Belgrade to be a place of “numerous peripheries”, by which she means you can turn a corner at any moment and enter a “fringe area”, as it were a pocket of space outside the bustling city centre, moving from loud and noisy places into quiet zones in a matter of seconds. Further: the motif of the circle imprinted itself on her creative brain, and I suppose once she’d spotted it she started seeing it everywhere – on buildings, on decorations, road signs. 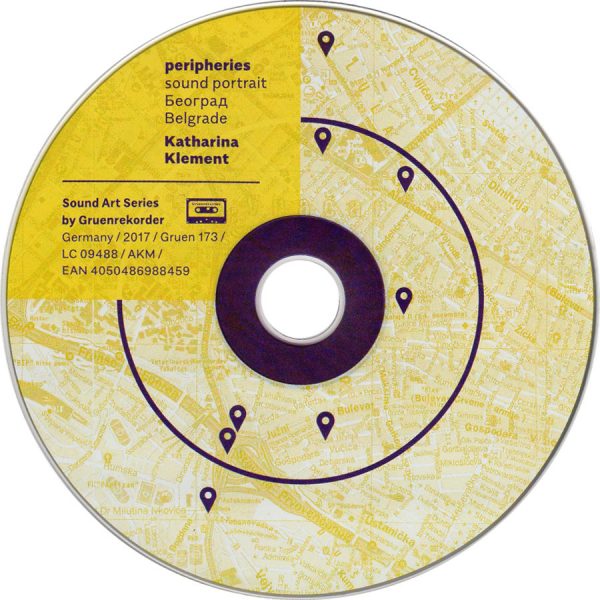 Klement felt that she now had a map in her hands, a map of the city which clearly had been drafted through her own singular creative process. Many readers will recognise this as something not unlike the Situationists and their “dérives” of Paris, except they were trying to subvert society and normalcy by going against the grain of the map with their meandering, purposeless walks. By contrast, I would say that Katharina Klement was trying to seek out a hidden truth, and may have come close to cracking the code of Belgrade. She used this information as the basis of her composition, one in which concentric circles naturally played an important part. There is an eight-channel version of the work; we get a stereo version on this CD. Besides her summary of the compositional process, there are also paragraphs of notes attached to each of the nine episodes on the CD, which reveal further fascinating details of the life of Belgrade and the unusual objects and places she thought fit to record. These include a Tesla induction motor, housed in the Tesla Museum; Romany markets and musicians in Zeleni Venac; and a magic escalator ride that starts in a business centre and takes the listener past the zoo, an island, a marketplace, and a concrete mixer.

In just nine weeks, this remarkable composer learned and absorbed a lot of history, got to know several people, and demonstrated remarkable sensitivity to capturing the nuances of their voices in interviews, ultimately telling many stories about Belgrade in her imaginative and well-crafted sound explorations. It takes a rare mind that is able to reach and understand the heart of a place as thoroughly and as sympathetically as Klement has done with this work. Such works remind us why artists, not politicians or town planners, should be put in charge of managing the layout and throughput of large cities; the results could only be beneficial for everyone in society.