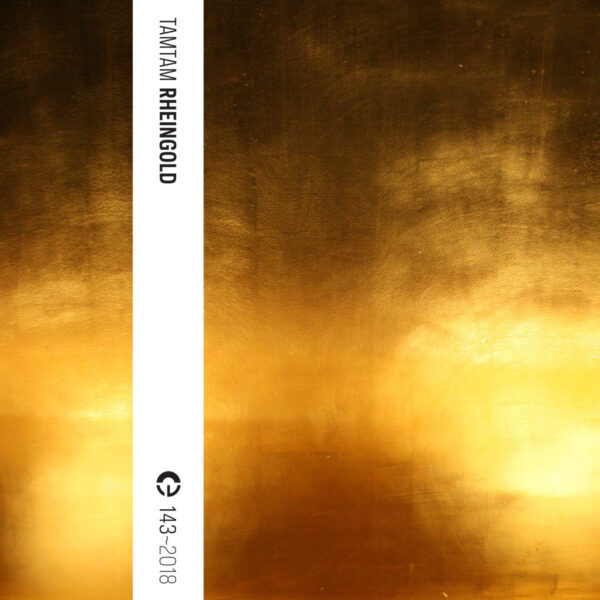 Sam Auinger scored quite a hit with this writer in 2001, when he made Box 30/70 with Bruce Odland (appearing as O+A). I seem to recall they created a fascinating twist on the field recording genre with their innovative “box”, which sits by a roadside and does unusual things to the sound of cars rushing past. This may not have any bearing on Rheingold (CRÓNICA 143-2018), a cassette release credited to TamTam and created by Sam Auinger with Hannes Strobl, playing the upright string bass while Auinger plays his samples and field recordings. Yet I do seem to hear the sound of that roadside traffic as one component in this layered, drifty and air-like drone piece. I must be imagining things though, because Rheingold was mostly made using a hydrophone (a microphone that works underwater), sited on the banks of the Rhine.

This is all Tamtam’s way of paying tribute to the Nibelung saga, and the Ring Cycle composed by Richard Wagner; I never made much of a study of this landmark piece of classical music, but apparently part of the story involves a treasure buried in the river. To tie us back into that classical music aspect, we have a gong player (quite fitting for a group called TamTam), Robyn Schulkowsky, who is credited here with playing his “self-made gong”. The project represents an effort made by these German musicians to come to grips with one of the “big myths” of their homeland, and presumably to try and encompass something of the musical history too (you can’t get much of a bigger landmark than Wagner, I suppose). The resulting 27+ minutes of ‘Rheingold’ are an utterly compelling abstract drone, one of great natural beauty, and with only a small ratio of conventional “musical” elements to sweeten the deal. Grand it be.

On the flip we have guest spots from Eosin, Malle Colbert, and @c, all bringing their contributions to the riverside picnic. Eosin: cloudy tones (generated by a gong?) with a foreboding drumbeat; Colbert: tuning the gong to create queasy unsettling atmospheres; @c turning in routine electronica minimalist moves. These are all OK cuts, but for me it’s the A side that’s found the buried treasure. From 19th October 2018.