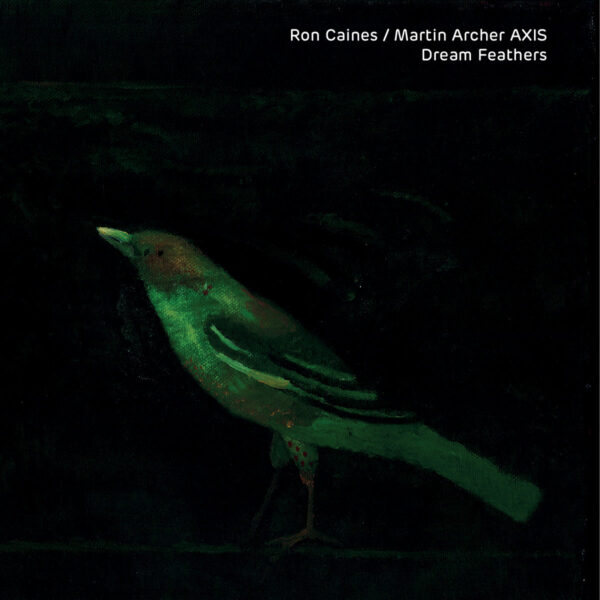 Saxophonist Ron Caines of pioneering ‘60s progressive-jazzers East Of Eden meets Discus head Martin Archer (clarinet, organ, electronics) in uptown Sheffield, armed with a formidable team of Laura Cole on pianos and harmonium, Hervé Perez with his field recordings and sound design, Anton Hunter on electric guitar, Gus Garside on double bass and Johnny Hunter on drums. Archer and Perez, as I recall, were involved in the trio Inclusion Principle that put out an album out on Discus a couple of years back. That’s a hip line-up right there, so I’m excited even before I press ‘play’ on the cd player. This disc follows hot on the heels of Ron’s album Les Oiseaux de Matisse from last year also on Discus, and features almost the same line-up of musicians; guitarist Graham Clark being absent on Dream Feathers. I really like the way the material on this album seamlessly veers from melodic to free-form in interesting and unexpected ways. I suspect all the players have been chosen for their ability to take on both worlds with enthusiasm, creativity and aplomb. Martin Archer puts it thusly: “In this continuing series of releases with Ron, we seem to have arrived at an interesting place where an ostensibly straight jazz group playing melodic material is somehow unexpectedly pulled sideways into a strange alternative electroacoustic universe…” As promised, the music shifts like desert sand dunes, changing almost imperceptibly from traditional references through free-playing and progressive forms. Like Les Oiseaux… before it, Caines turns unexpected corners and expresses something new.

“African Violets” has fantastic guitar feedback sounds like iron bridges collapsing in the distance. “Marcel”’s wind and double bass interplay is given a lift by sudden echo on the saxophone. Nice little touches of experimentalism; nothing that slaps you around the face, just subtle and, here’s that word again, unexpected. “Nico” – the title possibly referencing the influential female Teutonic titan of the weird – features very nice tremolo guitar. And in the closing piece, “Almazon 1934 reprise”, there’s even some tasty dub-style echoes breaking up Anton Hunter’s fuzz-laden guitar excursions. I’m bound to assume it is Martin Archer who is responsible for these nifty little ideas, as it is he who is credited as producer. If it’s not, then it could be David Watts at Chairworks Studio, or more likely the group themselves…

Ron’s wife Susan, a professional artist, provides the mysterious paintings for the sleeve artwork. I like the way label head Martin Archer always puts the cd in its own poly sleeve inside the high quality heavy card stock full colour digipack sleeves he uses for all his Discus releases. It’s like he genuinely wants to ensure his product arrives in the best possible condition and he wants it to stay that way; you can tell he really cares. All in all, not as wild and out-there as Les Oiseaux de Matisse, but impressive nonetheless.