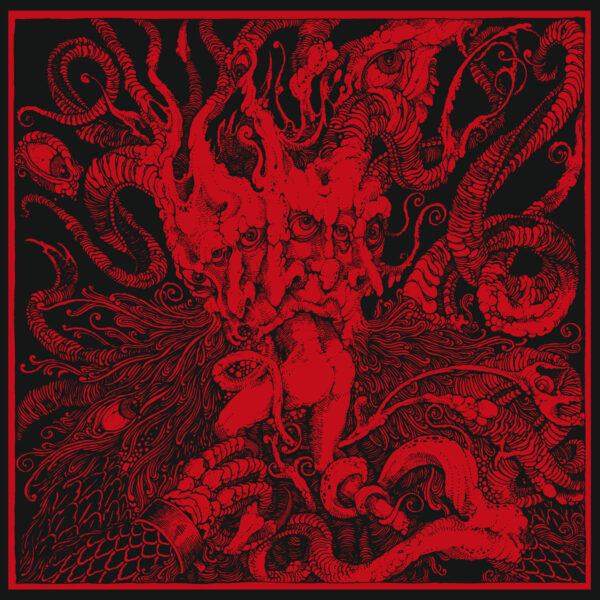 Farmed out to Mystískaos by parent label Fallen Empire Records which released Skáphe’s previous two albums, this third self-titled recording escalates the band’s chaotic and desperate black metal psychedelia to yet another confounding level of intensity. These guys are reaching a point where even their most fanatic supporters are falling by the wayside in alarming numbers, unable to comprehend the heights (or depths, as it were) of the black bleakness Skáphe have landed in. In the time since they began, Skáphe have expanded from a solo project founded by Alex Poole, a veteran in the underground metal scene in Philadelphia, to include Iceland-based vocalist D.G., and Texas-based drummer Jack Blackburn who works with Poole in several black metal bands (Chaos Moon, Entheogen and Gardsghastr to name a few) and who came on board for this third album.

Continuing on from “Skáphe²” (tracks I to VI) and an unnamed cassette released in 2017 (track VII), “Skáphe³” starts at VIII (“Beyond Earthly Understanding”) and from then on is more or less continuous with actual songs joined by ambient noise instrumental interludes. The sound seems less deep and overwhelming than on “Skáphe²” but the music, with its insanely inhuman machine-gun blast-beat percussion and shrill desolate guitar shredding, is even more terrifying, perhaps because its transparency exposes more of the inner workings of the demon beast animating it … and sometimes you don’t really want to see Evil in all its rotting glory – or misery. Reverb and ambient space not only expose the structure and the bleakness surrounding it but give the music and D.G.’s shrieking vocals a three-dimensional quality. You can really hear the musicians carve up and sculpt the sonic space into spires of malevolent percussion and sinister lead guitar lines entwining with bass like serpentine twins.

On later tracks the feverish music and singing clear away in parts long enough for listeners to confront the dark emptiness staring back at them and at this point sadness and sorrow for something once precious but now lost forever become prominent. The best (and most desolate) moment on the recording comes right at the end with track XVII (“Rebirth Synthesis”), a truly suffocating, nauseous work of choppy blast-beat pummel torture, sinuous guitar lines, brooding sinister bass and a sickly atmosphere, topped by D.G.’s tormented declamations; the clear production on this song emphasises the intricacy of the music and the musicians’ abilities to create and sustain such feverish music filled with dread, anguish and despair.

Past Skáphe albums may have been blunt bludgeoning instruments of torture; “Skáphe³” adopts a more refined and precise method, emphasising melody, variety and layering of different and very individual elements, of punishing listeners and the effect is even more severe. At the same time a weird and dark crystalline beauty is present, part and parcel of the demon machine malevolence generating it. I predict “Skáphe³” will be a classic and a cult item in years to come: it has a dynamic quality that is sure to fascinate listeners and keep pulling them in.