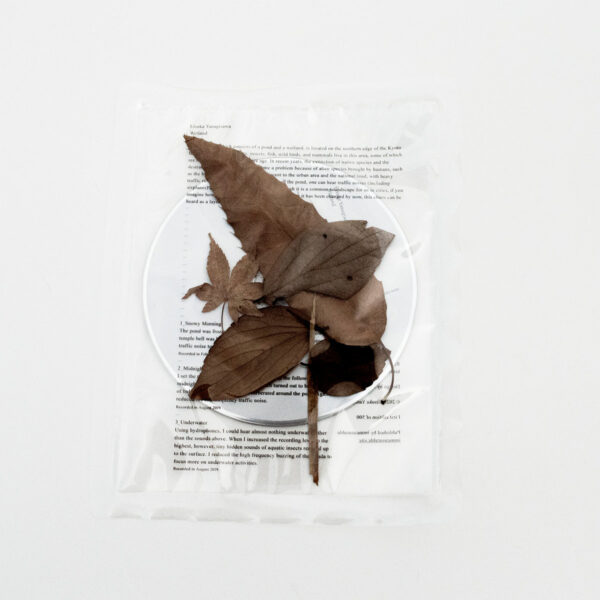 We received the first three releases from a new label Immeasureable, based in Osaka and run by Hideaki Okamura. First thing that struck me was the unusual packaging, sealed plastic bags, all very minimal with transparent inserts, small fonts, uncluttered layouts; an update on the “lower case” aesthetic…and there’s a mission statement enclosed, which reads “music as an art form is like a ghost that can not be completely fixed in the medium”. Promising start right there; the curator’s interest in the importance of the “medium” is expressed with a short discourse about the encoding of music, in order to write it onto a CD (24 bit) or publish it as a streamable file (96khz WAV file); to him, it’s interesting how the (musical) data can be expressed as a file size, proving that it’s not “empty”.

First item is by Eisuke Yanagisawa. This Japanese genius has previously come our way with his record of sounds discovered using a bat detector, and another fine CD of wind sounds revealed by the Aeolian harp. For Wetland (imm 001), he visited a certain site in the Kyoto Basin called Mizorogaike and produced these three field recordings, around 10-12 minutes apiece. The pond is noteworthy because a number of rare species thrive in its environs; plants, insects, fish, birds and mammals, some of which have a lineage which can be traced back to the ice age.

Yanagisawa’s ecological concerns come to the fore; he points out that some of these species are at risk of extinction now, not simply because of mankind’s urban intrusions, but because of the introduction of other species of creatures which endanger the ancient ones. He makes this point, however, in an extremely gentle manner; the recordings, which incidentally are very serene and beautiful to listen to, foreground the life of the pond, but include traffic sounds and airplane sounds in the distant background. Eisuke Yanagisawa invites us to listen, but also invites us to imagine how the pond would have sounded several million years ago. By allowing the ancient past and the present to co-mingle in this artistic space, creating what he calls a form of “chaos”, we can hear these things manifested as “a layer of sediment” of the site.

The three recordings are framed within very distinct parameters: the first, where the pond was frozen and there was snow everywhere, and the recording features the very evocative sound of a temple bell in the distance. The second, recorded at midnight, foregrounds the growl of bullfrogs, which the composer regards as one of the “alien species” that trouble the ecological balance. The third was recorded under the water, using hydrophones. He had to boost the recording level as high as he could to capture the sounds of water insects, and adjusted the levels so as to tune out the noise of the cicadas. In all instances, one has ample evidence of the artist’s very strong natural sensibility, attuned to a specific place, and expressed through specific recordings techniques.

This results in a powerful, integrated statement about nature. For evidence of yet more such integration, included in the transparent package are leaves and twigs gathered from the site. Around The Plywood (imm 022) is credited to Salad, a duo collaboration between Nagai Tsume and Masami Baba. This one’s more like a sound documentary, relating to an art installation; the curator Ayako Tsutsumi put this together in 2019 for an exhibit called “New Lagoon In Hokan-Cho, Okayama”; I think Salad were invited to contribute background music for the event, and a performance of sound art.

I’m at a loss to explain what’s happening on this rather odd but charming record; it seems to include both the friendly chatter of art patrons, engaging with the show at some level, along with very tasteful and unobtrusive instrumental music perhaps performed on an electric piano, creating jazz-tinged ambient easy-listening sounds. The two days of activity are also documented in text form, on the insert which lists a large number of short comments and remarks (in both Japanese and English); skimming through these lists reveals such pithy observations as “the smaller place makes me feel calm”, almost poetic in their simplicity. In fact they are just basic pointers as to what the audience were thinking, what they made of this audio installation as they wandered around; some of them notice the technical components, such as bluetooth, iphone, microphones and speakers; one of them says “do you use baking soda?”, a remark which has a delicious incongruity. These people certainly sound happy, and engaged, taking a simple pleasure in this audio art.

Hard to say why this record is actually quite compelling on some level; the music by itself, little more than banal wallpaper, doesn’t amount to very much, and neither does the cocktail-party chatter, but combined together, everything has a strange and simple allure. It may appear a bit self-referential, work that describes itself, but it quietly achieves a certain aesthetically pleasing result. Pictures of the equipment used for New Lagoon are shown on three small card inserts, printed on dayglo green.

With Youngso No, we’re in the area of phonography / field recording again, once again a very site-specific piece embodying particular lines of thought. The title, for starters, is quite lengthy – Time: 18:33_19:43 Date: 06 Aug 2015 Latitude/Longitude: 34°23’47.8″N 132°28’16.3″E (imm 033), so that we have a work which describes itself in an extremely specific manner. This was a technique used by Chris Watson, especially for his early Touch recordings, but he would include the grid co-ordinates and dates/time as a footnote, rather than making it an entire title.

Youngso No recorded this in Hiroshima City, and prefaces his statement by reminding us of the significance of the date of 6th August, which is in fact 70 years after the atomic bomb was dropped by Enola Gay. The work, 70 minutes in length, comprises three parts – the field recording he made in Hiroshima, along with something more process-based, which he describes with some accuracy as “sound source that converted VLF (and ELF) waves into audio”. This is probably a technical aspect of the recording process that I don’t fully comprehend; it may have something to do with converstion of radio waves. I’m more interested in the speculations and ruminations that Youngso No outlines for us, which indicates a very deep chain of though that starts with “sound is transmitted by air vibrations” and leads him to assume that we can hear, or otherwise apprehend, the sounds of dead people, and “people who will be born in the future”. This is based on the premise that even the slightest action or movement represents an “operation of life”, and must create a sound; and he believes there are certain phenomena which are beyond our normal range of perception.

While some of this may sound like it’s straying into the dubious territory staked out in recent years by those who put their faith in EVP recordings, I am persuaded that Youngso No is on quite a different tack, and his work is firmly rooted in a technical process where the transparency of the operation is paramount to him; to put it another way, he isn’t cheating with the results to make the slightest bump or glitch sound like human speech, like the EVP manipulators often do. Rather, he believes in the potential of this “framed” site-specific and time-specific snapshot to reveal something to us, provided we are patient enough to listen. All this said, you may take this CD home and put it on, only to discover 1:10:00 worth of anonymous traffic sounds not varying very much, and wonder what all the fuss is about; but, like the other two releases above, this has a strangely compelling charm that invites continued listening.