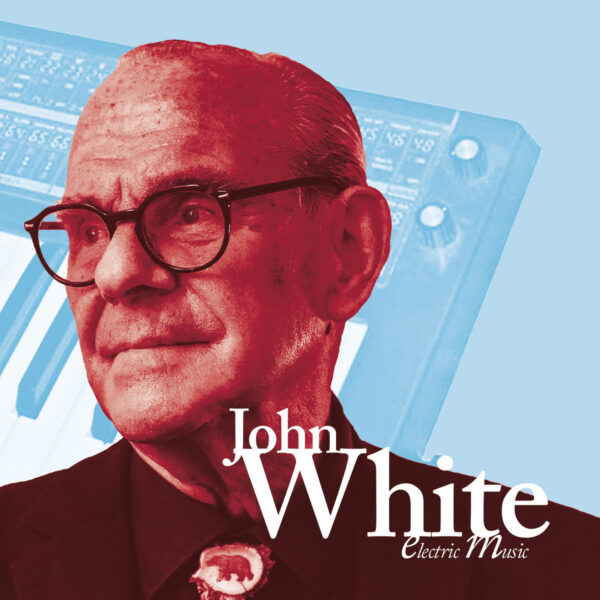 A fine introduction to the music of John White, the Berlin-born English composer whose name is entirely new to me…a cursory glance at his history indicates an eclectic and restless composer, evidently well-informed by modes and manners of 20th century composition, and skilled in many aspects of music composition. Some would credit him with the invention of “English minimalism”, with his interest in systems music and use of machines for music creation. His 1962 piano symphony appeared on a Music In Our Time record (not the CBS series, but a one-off UK release which coincided with a festival of this name). There are also associations with Gavin Bryars and Cornelius Cardew; with Morgan Fisher (who made Slow Music with Lol Coxhill); and with the English composer Roger Smalley.

His friend Dave Smith (another English minimalist / systems composer) notes that John White is super-aware of many modernist trends, including everything from Satie and Messiaen up to “post-Cagean” experimentation using indeterminate methods since 1966, but that he’s also quite discerning and selective in which composers are admitted as influences on his work. Without having heard a note, we might be able to divide it broadly between the piano sonatas which he’s been composing since 1956, and the more recent electronic music in which one can detect traces of Kraftwerk and The Residents. Plus there’s the work for theatre and dance pieces…on today’s release, Electric Music (ANTS RECORDS AG22) from the Italian Ants label, it’s the electronic music that we can savour, most of it composed and realised around 1984-1986. Some of it might overlap with a 1988 cassette called The Merry Samurai’s Return From Work, released on the Musica Nova label, and if that is broadly correct we can assume that much of the music on this double-CD was made with computers, synthesizers, drum machines, tone generators, and effects. However, the process that’s relevant is the compositional one; John White works with processes and systems, describing a method whereby “numerical notions are translated into sounds”, and these number-based schemes can determine everything from pitch to duration and tempo.

So far, one is piecing together a picture of a serious-minded and rigorous composer, but also someone quite rugged and determined to go his own way. None of it quite prepares one for the music on this set, some of which is quite poppy, resembling an unusually intelligent and dense form of electro-pop on the surface; some of the tunes here could almost pass muster on a 1980s TV show on the BBC (which isn’t to suggest John White would have felt at home with the Radiophonic Workshop musicians), and the selections from The Assignment will be particularly alluring to susceptible soundtrack collectors, although the commission was for a theatre work rather than television. Elsewhere, the short ‘Nintentions’ tracks, jolly ditties of around 1-2 minutes in length, could easily be mistaken for computer-game soundtracks (even the title suggests the Nintendo corporation were twitching their curtains at the time). None of this is to suggest that John White should be put in a seraglio with Delia Derbyshire, Paddy Kingsland, or Desmond Briscoe; the music is just a shade too individualistic and wayward, and in spite of the “odd” surface sounds, and the traces of irony and self-deprecating humour, there’s no doubt of the fine compositional mind at work here, operating in the body of a maverick.

Even so, he was not that much of a purist that he resisted narrative interpretation of his music, and he himself indicates that “sometimes picturesque allusions arise from the way of working”, and the end product of this is the slightly playful cartoony titles that emerge, such as ‘Tyrolean Apres-Ski Muzak’ or ‘Breakfast at the Academy of Martial Arts’. It remains to mention the hands-on working method exhibited in these 1980s works, made using Yamaha and other affordable keyboards; a stance which on the one hand isn’t too far away from the very lo-fi methods he has used – one project, LiveBatts!, was a performance group who played battery-operated instruments; and on the other hand, is deliberately intended as a riposte to the formal world of electronic and electro-acoustic composition, a culture which from the get-go established itself as remote, expensive, and institutionalised, involving elaborate machines and studios often sealed off in academic universities and studios.

We are grateful to the label and the compilers – Andrea Rocca has done a superb job restoring content from original cassettes, and Dave Smith wrote the annotations – for introducing us to the work of this unique composer and musical personality. From 11th January 2021.