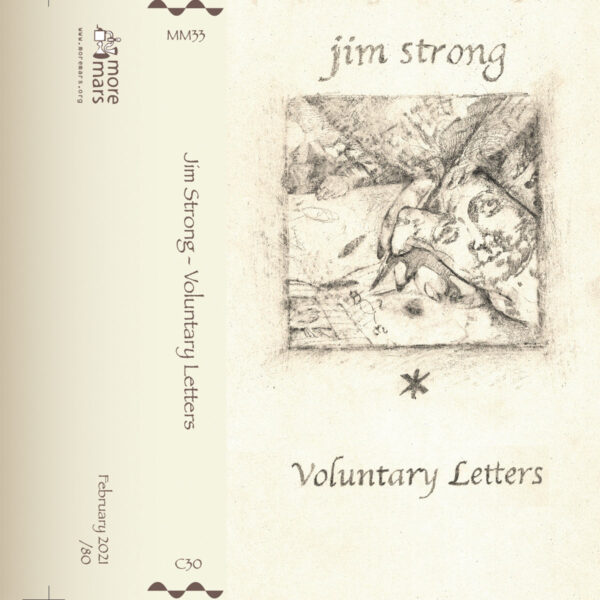 Three new tapes from the More Mars label in Rethmnyo on the island of Crete, who last sent us two fine cassettes by Marc Baron and Karen Constance.

Voluntary Letters (MM33) is by Jim Strong. I never heard of this American artist before, and now find he’s as much of a gallery artist and curator as he is a sound-art fellow, plus he runs his own tape label Cor Ardens since 2019, often packaging the small-run cassettes in delightful hand-made boxes. One odd sculpture he made involves a bird wing mounted on a small table and connected to a speaker. On today’s tape, he pushes his own speaking voice through a number of battery-operated devices, and devices with small motors, plus numerous other unexpected objects and stringed instruments are involved, presumably all crafted in his workshop of delights. Particularly intriguing is the notion of “voice through door bell”, an action which suggests an unexpected visitor announcing himself in a very eccentric manner. Then again, there’s a lot to be said for “winged termites bumping into a microphone”, as if the artist were making friends with the local pests in his studio and incorporating them into his art.

All of this might be conveying something about the nature of communication itself – I make this supposition based on the cover art showing a hand wielding a quill pen and inscribing inscrutable texts, with a benign face superimposed – and because he takes the trouble to mention “alphabets” in his explanatory list. Many fine artists and conceptualists have played with the constituent parts of language, often atomising it down to individual letters, but Jim Strong seems to be driven by a real inner conviction, determined to invent a new language of his own, and explore it as best he can. It’s very creditable that he does this mostly in an acoustic manner, not propped up with needless electronic effects, and very little tape manipulation bar a slight bit of gestural tape wobble in places. The individual tracks are given semi-poetic titles of which Joseph Cornell surely would have approved. Like this one very much. 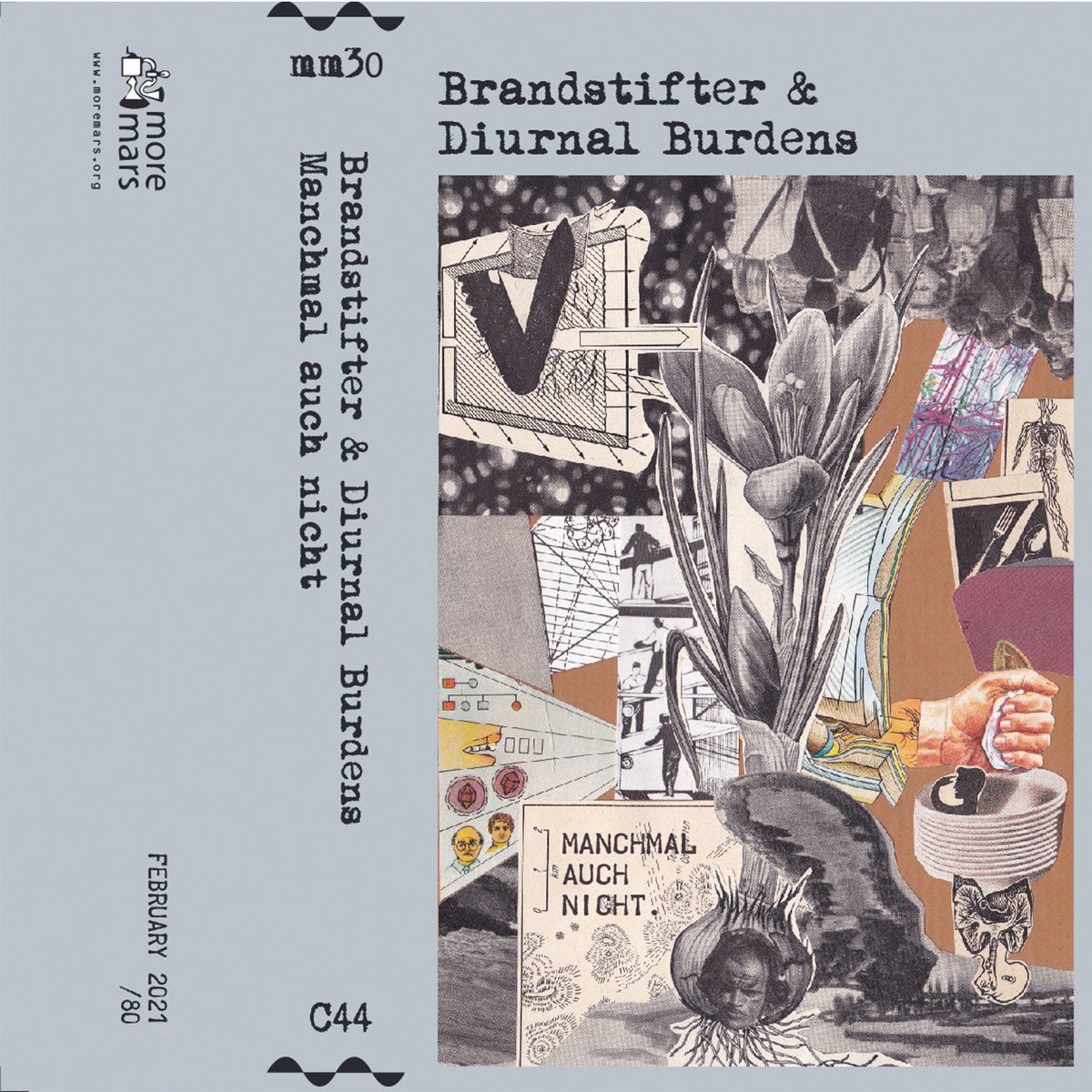 Manchmal Auch Nicht (MM31) is a beguiling collage of field recordings, spoken word, poetry, and tapes going slightly wrong. This delicious brew was created by Brandstifter and Diurnal Burdens (i.e. Ross Scott-Buccleuch); between them, they favour less-than-optimal devices for their tapes, such as dictaphones and answering machines, ensuring a gritty lo-fi surface throughout, plus there may be some low-key electronics, synth work, Casio keyboards and loops scuttling about the garden. Brandstifter happens to have been a member of a number of alt-rock experimental bands in Germany in the 1990s besides releasing his own solo work, and if I tell you he appeared on a split/collaborative release with Ben Patterson and Kommissar Hjuler in the same grooves, you might have some idea what to expect from this gently addled, free-wheeling assemblage of sounds. Brandstifter also contributed the “diary poetry” segments (most the tape is in the German language) another factor adding to the charmingly mundane matter-of-factness of Manchmal Auch Nicht. Neither creator is out to startle us with odd juxtaposed sounds, nor attempting to reveal the strangeness of life through multiple edits as Aki Onda may do, but gradually a wonderful and magical world-view emerges from this teeming hive of oxide particles. This team may be one for Rinus van Alebeek to watch, methinks. Detailed and dense collage artwork on the cover is also by the duo. 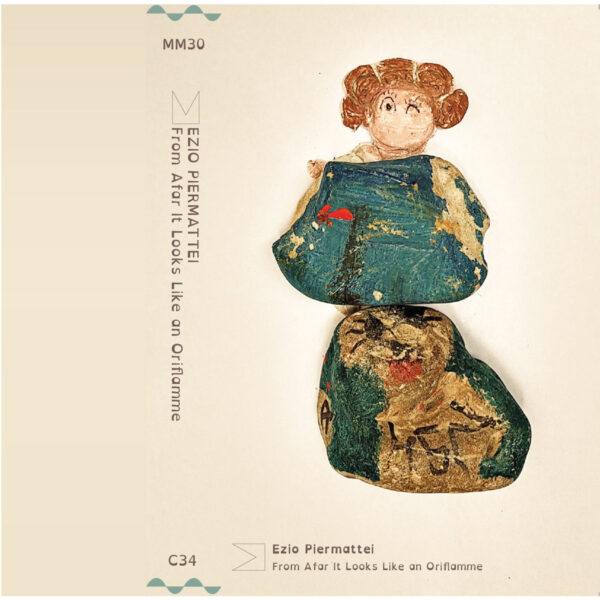 Ezio Piermattei is the Italian creator whose work we have loved since around 2012 when he first sent us his demented tapes of improvised instrumental music assembled possibly by means of multiple overdubs. More recently he’s taken a turn towards experiments with field recordings and voices, creating ingenious and subtle collages. Today’s tape From Afar It Looks Like an Oriflamme (MM30) is in that mode. It’s been built from a wide variety of source materials, including site recordings, spoken words, music, found recordings; the keywords, according to the label press, are “cinematic”, “humour”, and “sound detail”. Four guest contributors are credited inside with providing the voice fragments, and one of them supplies piano interludes too. I agree about the “cinematic” tag as, like Mark Vernon to some extent, Piermattei is capable of creating a layered, ambiguous narrative with his gentle juxtapositions and collages, suggesting an enjoyable episodic adventure even if its meaning is far from clear and there is no conventional narrative structure to it.

I also maintain that Ezio Piermattei has a genuine interest in humanity, and his voice captures are intended to provide brief glimpses into the eccentric, unpredictable minds of the people who approach his microphones to tell their story (or at least spin an anecdote or two). Each release of his might be seen as another chapter in his informal survey of the collective human consciousness, as expounded in fragments. There is also, on side two, what appears to be a conversation taking place between a real-life human being and a language instruction record; the latter has always been a popular source for semi-absurd surrealist snippets (as used by Crawling With Tarts, for instance), but I love the way Ezio has brought it to life in this brief but very sympathetic episode, causing a dead voice from the past to intervene in the present. Welcome return for this unassuming genius, last heard on his 2019 CDR Gran Trotto for Chocolate Monk.