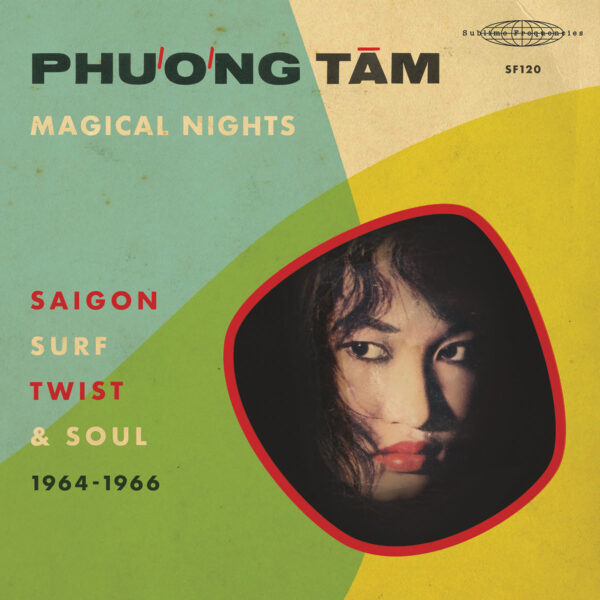 Obscure enough these days that, at this time of writing, she still didn’t have a Wikipedia entry, Phuong Tâm nevertheless holds a place in Vietnamese contemporary music history as one of her country’s earliest performers of rock’n’roll in the 1960s. Over a brief period from 1964 to 1966, the then teenage singer recorded 30 songs for three record labels in Saigon (now Ho Chi Minh City) in a variety of genres popular at the time: rock’n’roll, twist, surf, blues and jazz among others. In 1966, Phuong Tâm gave up her pop-singing career for marriage but the songs she sang and recorded inspired other young Vietnamese singers and many of her songs were covered by others. The next half-century would see many political, economic and social upheavals which affected the pop music industry in Vietnam, and the lack of proper documentation and master tapes of the music from pre-1975 Vietnam, not to mention loss over time for various reasons, meant that much of Phuong Tâm’s work was virtually lost until 2020, when her daughter Hannah Hà (living in the US) and Sublime Frequencies label boss producer Mark Gergis set out to recover and restore the music. This compilation of 25 tracks is the result of their efforts.

With restoration and remastering by Gergis, the songs sound very clear with each instrument distinct in the mix and the music even featuring some reverb. On most songs Phuong Tâm is accompanied by a orchestra in which musicians play quite a wide range of instruments: electric guitars, saxophone, violins, piano, organ, crisp and snappy percussion, a big brass section, and an equally huge choir of backing male singers. The tracks all stress clear and often very catchy melodies in song structures common in pop songs of the 1960s, with middle sections often done in a different key or featuring variations on the main melody (the so-called “middle eight” or bars 17 to 24 in a 32-bar song) from the rest of the music. Most songs are intriguing combinations of elements snatched from various genres: track 5 (in English translation: “If We’re Far Apart”) is an odd mix of surf-style lead guitar solo and sedate blues with a brief melodic nod to Roy Orbison’s “Pretty Woman”. Whatever the level of instrumentation used or the eclectic mix of styles crammed into each and every song, Phuong Tâm’s amazingly clear voice tears through them all with aplomb, with energy and enthusiasm to spare. She clearly was a talented singer with good range and pitch, able to intuitively inject the right level of emotion into a song where needed.

Even so, listening to all 25 songs, I get an impression that even these recordings didn’t capture all that she was capable of: the majority of tracks are slow and tend to be restrained and orderly. Few of them really stretch the teenage singer’s potential. Not a lot of whooping going on here! (I even wonder if after three years of non-stop singing and recording, Phuong Tâm got bored which might help explain why she walked away from the music industry.) With over 70 minutes of mostly 3-minute songs, the album can be a stretch for most listeners if heard in one session; best to hear it all in one or two tries to find the songs that most appeal and from then on play favourite tracks.

The CD release comes in 6-panel digipak format with two 32-page booklets in English and Vietnamese with liner notes from Gergis and Ha, and photos, news and magazine extracts and other visual art treats that bring something of the flavour and frenzy of the pop music scene in Saigon in the early to mid 1960s.