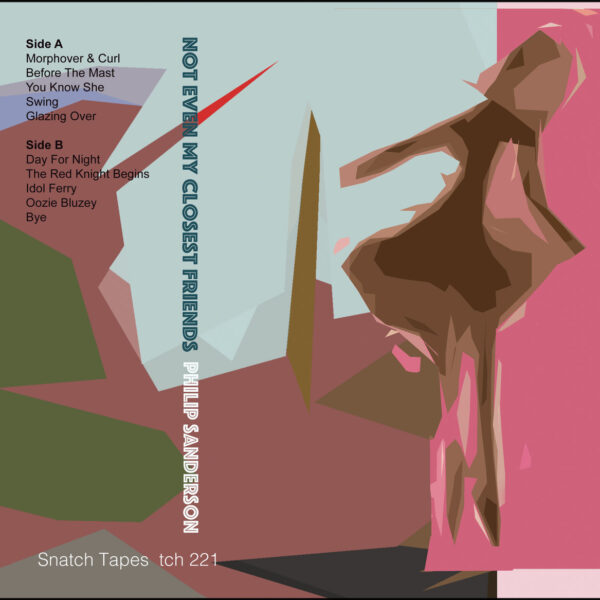 Latest gem from Philip Sanderson is Not Even My Closest Friends (SNATCH TAPES tch 221), this time released as a limited edition cassette tape. In some ways following on previous outing Rumble Of The Ruins, it’s another set of electro-pop songs, carefully composed and layered, all performed and sung by Sanderson.

Once again assured melodic tunes and a user-friendly surface hook the listener in, and at one level the closest comparison might be Sparks (as already identified by another online reviewer), and not just because of the keyboards and multi-tracked vocal parts but also the shrewd knowing tone in the semi-ironic lyrics, which just happen to be littered with enough pop culture references to fill Greil Marcus’ Dustbin Of History. It so happens that our man has blogged about the creation of this album and those inclined to learn more can view a series of posts he wrote in June-July 2021, printing the lyrics to each song and detailing the circumstances of its creation. Even a cursory skim here will yield a rich harvest of unexpected influences and ideas, including Genesis, Throbbing Gristle, sea shanties, British Cinema of the 1950s, Kraftwerk, Aleister Crowley, Marc Bolan…and that’s not counting the “shopping list” styled song ‘Idol Ferry’ which drops so many ultra-charged names into the magic hat that previous contenders Bill Joel, REM, Paul Simon, and Bob Dylan just wither into tiny raisins…and all this is without taking into account the song-craft, studio technique and technical ability with synths, software, drum machines and sequencers that Sanderson weaves together with an almost invisible skill.

There’s a certain modesty and charm that conceals this skill; there’s no keyboard solos or other musical flourishes, and all the effort is poured into the song’s construction, each layer adding the precise degree of desired inflection or musical mood to the overall piece. When faced with the familiar producer’s dilemma of having too many good tracks to work with, the composer stoically sighs “you have to choose which child to sacrifice” as he shelves an immaculately recorded instrumental part simply because it doesn’t fit the overall scheme. (Perhaps Brian Wilson should have applied this line of thought in 1966, instead of allowing those multiple takes of ‘Good Vibrations’ or ‘Heroes and Villains’ to grow out of control). Elsewhere, our self-effacing singer comments on how he keeps his own vocal mannerisms in check with a simple “you can have too much chocolate in your box”. The net result of all this work is a number of imaginative and distinctive pop songs (and one instrumental) which will bear repeated listening for many years, and even on early plays one can discern the slightly dark and discordant elements lurking in the background of these otherwise brightly-coloured pop tones, elements which have evidently been layered in with consummate care.

Conceptually rich, NEMCF deserves to be regarded as an intelligent, informed recasting of selected moments from pop/rock music history into new and exciting forms, in a process which has to my mind been matched only by such luminaries as David Thomas and Kraftwerk. From 11th June 2021.