Long overdue notice for this William Burroughs LP from the Paradigm Discs label. Ali’s Smile (PD 36) is I think the second Burroughs item from this label, arriving after Curse Go Back, a 1968 recording, released in 2016 (though we never heard it). Burroughs is the kind of literary figure who’s strong on ideas, extremely influential ideas (about which more later), but it so happens he also had a very distinctive speaking voice, and there are many recordings of himself reading his own works. It’s valid to think of him as a species of performance artist, and, no doubt, a sound poet – after all, he appeared in the pages of Henri Chopin’s avant-garde OU magazine of sound poets and concrete poets, and I know I’ve heard two unforgettable recordings of Burroughs on that Revue OU box set from 2002. I say unforgettable, not just because the texts were weird and unsettling, but the way Burroughs intones his words is as unmistakeable as the sound of a jazz musician; he has a way of getting under the skin, drilling his ideas into you, and you might liken him to a form of literary virus using his voice to infect you. Clive Graham, who runs the stalwart Paradigm Discs label, has a long-standing interest in sound poetry as a form, and has curated many instances of spoken-word art for his radio show. It makes sense that he’d issue a Burroughs LP or two in that context. It was when I was in the middle of track 3 on the B side of this LP that it occurred to me that Burroughs hadn’t paused, hemmed, or coughed for a single moment all the time he was speaking; his words unspool with a rather frightening clarity, as he speaks with calm assurance and an unearthly precision, even when his subject matter is sometimes frankly bizarre or outré. “I don’t believe in being obscure,” is one declaration of his I noted down, as he strives to make himself clearly understood to his readers – and his listeners.

This might seem an odd time for me to admit I am not much of a Burroughs fan, and have read virtually nothing from his unique oeuvre. It might have helped if I’d read Nova Express, as it would have prepared me for the seven tracks on side B (and one on Side A), published here under the rubric of ‘Nova Dispatches’. In 1963, a journalist Gary Goldhill sent him some questions; Burroughs recorded his responses on the tape recorder, producing some 30 minutes of spoken word material. Thereafter there’s a chequered story of what happened to the tapes and how they were partially published, broadcast, re-used, or otherwise heard; they gradually wormed their way into culture through underground magazines, lectures, even BBC radio (the Third Programme). The detailed insert notes written by Jim Pennington (who also produced the Curse Go Back LP for this label) piece together the story, indicating something about the slow release of Burroughsian ideas over time, ideas considered by many to be too explosive or dangerous for mass consumption. If I’m understanding it correctly, this LP may in fact be the very first time we hear these recordings in their entirety. Since they seem to predate even the now-collectible English Bookshop LP (published in 1965), this alone would make Ali’s Smile a must-have for any Burroughs fan. To a novice like me though, I’ve found the B side here a useful way in to trying to understand and appreciate this writer, who has remained a closed shop to me for so long. I think he’s talking about parts of the so-called Nova Trilogy, comprising The Soft Machine, The Ticket That Exploded, and Nova Express, published between 1961 and 1967; he reads aloud excerpts from some of these, but he’s also talking about his writing techniques, his ideas, and articulating the general themes of these works. The themes are pretty bleak and pessimistic, from what I’ve managed to pick up from the grooves; he was aiming to create a “new mythology”, following oral and literary traditions by including heroes and villains, and depicted a tremendous struggle, a great conflict, and an ongoing war. Some of this material verges on apocalyptic; the “Mayan god of pain and fear from the white hot plains of Venus” lectures a roomful of board members, speaking in great detail about the coming extermination. It’s all presented as a very violent and wayward form of science fiction, but there’s no doubt that the true source here was Burroughs’ own paranoia about the military-industrial complex of the United States, and its apparently unstoppable power. By the time of track 6, I’m really feeling a tremendous pessimism as Burroughs assesses, with a clinical and fatalistic eye, the extent of the inevitability of the doom that awaits us.

Of particular interest is his description of the “Nova Technique”, which presumably features strongly in the trilogy; it’s a foolproof method of getting results by inculcating aggravation and conflict. You simply have to make a tape recording of what The Enemy is saying, edit it down to the choicest and most provocative moments, and play it back to them. You then record their responses, and play them back also. Burroughs calls this method “feedback”; in his fiction, it will lead to nuclear war and total destruction. As a description of human discourse, it’s incredibly bleak, but also very prescient. For one thing, I’m reminded of a Burroughs anecdote (I can’t vouch for its veracity) of how he himself made tape recordings in Paris of a vicious old French woman who spat abuse and hostility at him every him he passed her news-stand. Following the feedback method, he replayed those tapes as he walked by, using sound as a weapon, turning her own hostility against her. Apparently her news-stand caught fire soon after, and she lost everything. For another thing, I’m also reminded of the hideous dramas still playing out in our own country, variously identified as “culture wars”, or “gaslighting”, especially in the arena of social media. The topic may be Brexit, or it may be “woke” culture, but the technique is exactly the same; right-wing politicians, sociopathic journalists, and hateful citizens are all using selective quoting and “feedback” as a weapon to destroy their enemies, to sow discord, to cancel debate. Some say it’s lifted from the Trump playbook, some say Putin; but maybe Burroughs already knew all about it, in 1963. Presciently, he issues a stern warning on this LP about the power of this method, and how we must work hard to protect ourselves from it. I’m aware that Psychic TV attempted their own form of feedback, or something akin to it, by editing together and collaging sound recordings of moments of strong emotional release and hoping thereby to unleash potent psychic forces when played at loud volumes over a PA at gigs; no doubt that Genesis P. Orridge was an early Burroughs adopter and conduit for his works, but I reserve the right to regard his antics as rather juvenile, creating blunt instruments compared to Burroughs’ scalpel. 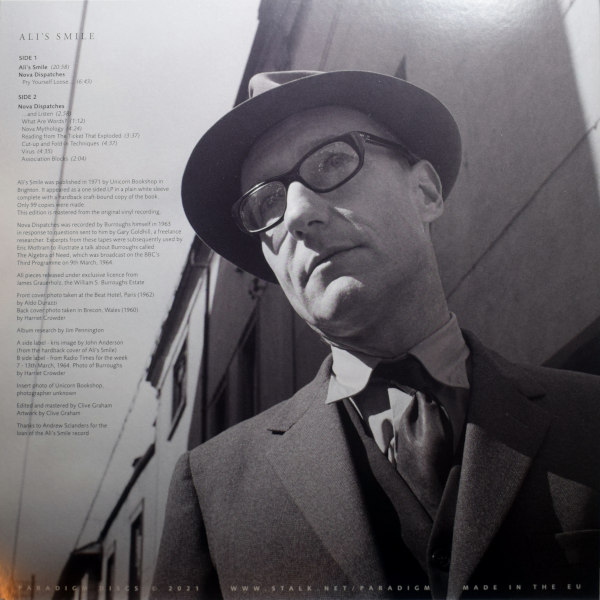 I’m also personally interested to learn a bit more about the cut-up method, which Burroughs describes here with remarkable precision in just 4:37 minutes. Brion Gysin is credited with inventing it, expanding on the ideas of collage which had already been used in fine art painting in the first half of the 20th century; as Burroughs describes cutting a page into four equal sections and rearranging the order, I suddenly have a real sense of how this method worked; useful, as the first I’d heard of it was on that Bowie Cracked Actor documentary, where he was cutting up a page into individual words and sentences (and apparently creating the song ‘Candidate’ on Diamond Dogs). Burroughs credits himself with the “Fold-In” method, where a typed or printed page could be folded in half and laid on top of another, unrelated, page. If page 1 could be laid on top of page 100 from the same novel, then – he argues – the protagonist in the fiction could effectively travel across time and space, in a process that he likens to the flashback (or flash-forward) used in Hollywood movies. In this way, “déjà vu is produced to order”, to use his own expression. He’s quite clear that cut-ups and fold-ins are just a manner of experimentation, a technique; and yet they also feature as an integral part of his Nova mythology. Apparently there’s a fictional agent who can use newspapers, magazines, and books to receive detailed instructions, secret orders written and delivered in an unbreakable code. Another instance of prescience, perhaps; in the internet age, we’ve not only got nutcases who see hidden messages in everything from LP covers to the Bible Code, but we’ve also got real-life terrorists who are able to conceal messages in browser caches or the hexadecimal code of a JPEG file.

From the above, it seems I’m talking myself into becoming a Burroughs reader, and a part of me finds some appeal in his notion that he considered himself a “map-maker of psychic areas”; but then I played the A side, and found myself once again completely lost. ‘Ali’s Smile’ is 20:58 minutes of fiction which may or may not have some connection to the Scientology cult of L. Ron Hubbard; I frankly own that I can’t follow it, or find any sympathetic connection to the unlikeable characters. Even Pennington’s notes on it, perhaps designed to enlighten us, only confuse me further with their impenetrable references. Even so, it’s an important recording; originally published in 1971 as a one-sided LP by the Unicorn Bookshop in Brighton – along with a hand-bound copy of the book the reading is taken from. Since only 99 copies were made, I suppose both book and LP are now highly-prized collectors items, but there’s also a back-story about the Bookshop itself, and an obscenity trial that left its owner Bill Butler substantially in debt. This story, told by Pennington and illustrated with a photograph of the Bookshop on the insert, is another useful snapshot of counter-culture clashes in the post-hippy UK; we might cherish this lost shop along with Better Books and Indica, the London locales that between them were loci of excitement for Bob Cobbing (another sound poet), underground cinema (leading to the London Film-Maker’s Co-op) and early appearances by AMM.

I seem to have got through this lengthy review without expounding further on the “virus” motif / subtext that is crucial to understanding the Nova mythology, but I suggest you buy the LP and discover more of it for yourself. I also wanted to devise an interesting footnote about the use of the tape recorder, but I think the point’s already been made. 1000 copies were pressed; as ever, a splendid presentation of an important piece of underground culture from this excellent label. Arrived 20th October 2021.