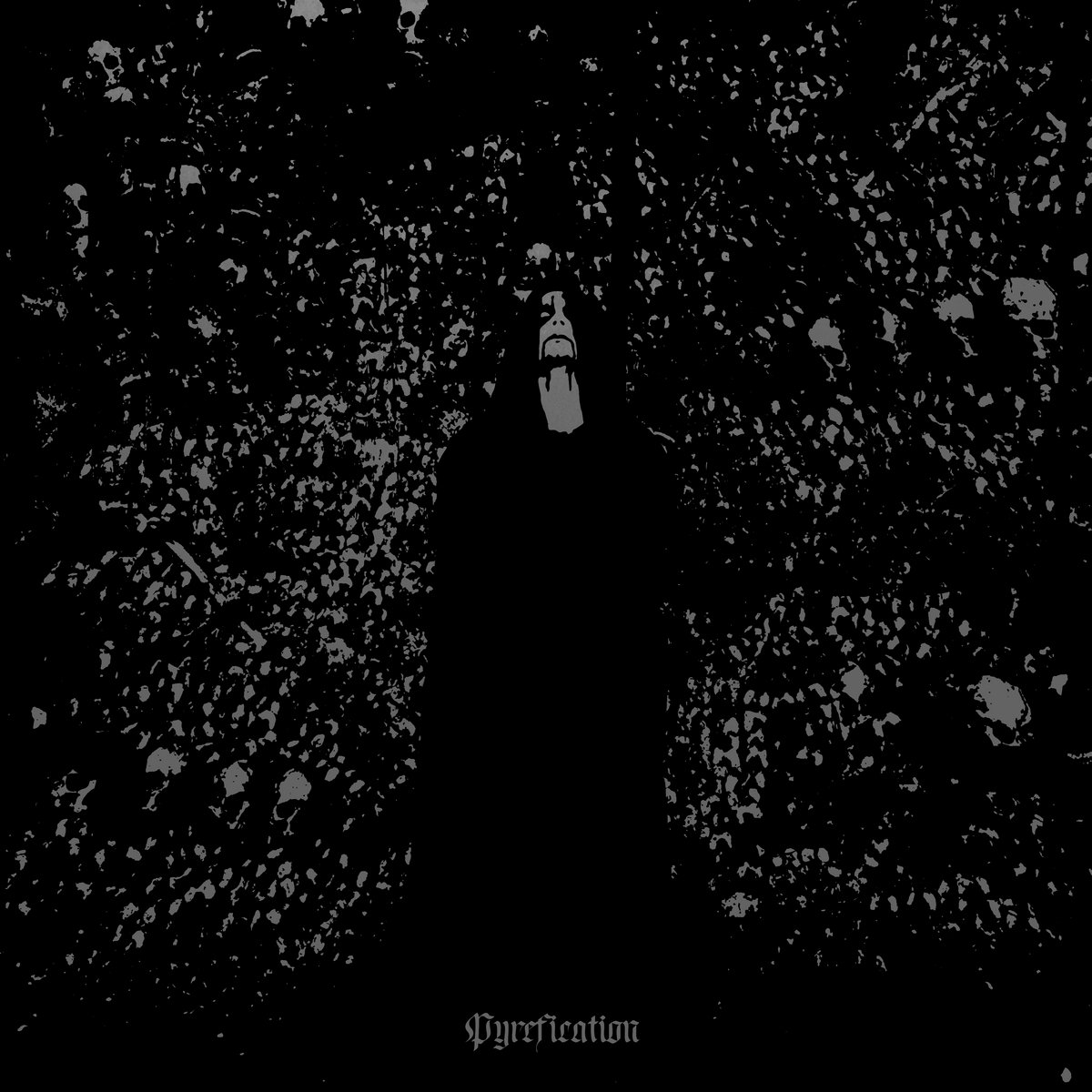 For a band that put out its first release in December 2017, and then proceeded to rack up an astonishing total of eight recordings as of now (November 2019) in a style of incredibly bleak and lo-fi raw ambient noise BM all its own, Pa Vesh En remains stubbornly obscure with no known home base in its country (Belarus) and no known members. It’s as if the band’s recordings appear from another dimension through a tear in the invisible fabric separating our world from a universe existing in parallel with ours: a world of unending and unbearable darkness, disorder and suffering. “Pyrefication” is Pa Vesh En’s second album on which the band – well yes, Pa Vesh En could also be a one-man act – details a sonic universe of extreme anguish and pain, of the hopelessness of an existence in a place and a time from which there can be no escape.

Right from the start the listener is plunged into a hellhole of crashing doom chaos, downbeat bass drones and dark looming-shadow keyboard atmosphere out of which the voices of souls permanently lost in the turbulence cry in fear and pain. Out of this world comes “Wastelands of Chaos”, all restless thundering drums, runaway tremolo guitar riffing and howling, chanting voices managing to form a song structure from the roiling storm. In spite of the non-stop, seemingly directionless torrent of noise, the track has a structure that listeners can pick up, and riffs and melody loops do appear out of the droning noise. A more definite song structure arises in “Call of the Dead”, a doomy piece with a slow, apocalyptic toll-bell beat and hellish guitar riffs: it sounds very much like a track to play at an execution. “A Cacophony of Spiritual Transition” reinforces the notion of the long-dead calling out to a new entrant among them with samples of deep-toned throat singing introducing the track. The bass drone loop anchors the guitars and groaning multi-voiced demon choirs as they fight for dominance in the storm of noise and repeating keyboard and guitar melody loops.

The last three songs must have been recorded in one of the deepest, most desolate niches in Hell: the atmosphere is dense and steaming, and the screaming and noise are chaotic and desperate. Any tunes that arise are filled with pain and the insanity that comes from eternal mental torment. Industrial ambient influences become apparent in the outro track which becomes a three-dimensional sculptural soundscape in parts.

Even though all tracks are rooted very firmly in a distinctive sonic universe of noisy hellish mayhem, they all sound very different from one another – this indicates the level of attention to detail and the thought and care put into song composition and the recording of the songs. The only problem I have with the songs is that for their style of music they are much too short and end too abruptly. With an album like this, the occasional fade-out or segueing into the next track, to give that impression of never-ending pain and agony in an indifferent and empty universe, is needed. There is also the challenge of maintaining listener attention in later tracks which tend not to vary much within their self-imposed limits of sound and composition. I understand that an album portraying soundscapes of madness and darkness, chaos and turbulence, will have its own rules to obey that will be contrary to what would be expected of music with optimism and hope, and monotony and repetition are going to be inevitable – because madness will include obsessions that may be more banal and boring than frightening – and so there is an extra difficulty involved in making such an album “appealing”, if that’s the right word, to sympathetic listeners. A balance between depicting depression and despair as faithfully as possible and still gaining and sustaining attention to music reflecting a mind stuck in a downward spiralling groove has to be found.

The success of “Pyrefication” lies not so much in its individual tracks as in the world it describes: a world where darkness, madness and chaos reign forever, where for 40 minutes listeners feel and understanding its overwhelming terror and derangement. It’s a world of endless depth and extreme emptiness, one that will stay with listeners long after the wormhole that briefly unites our world with the universe of Chaos has closed up.