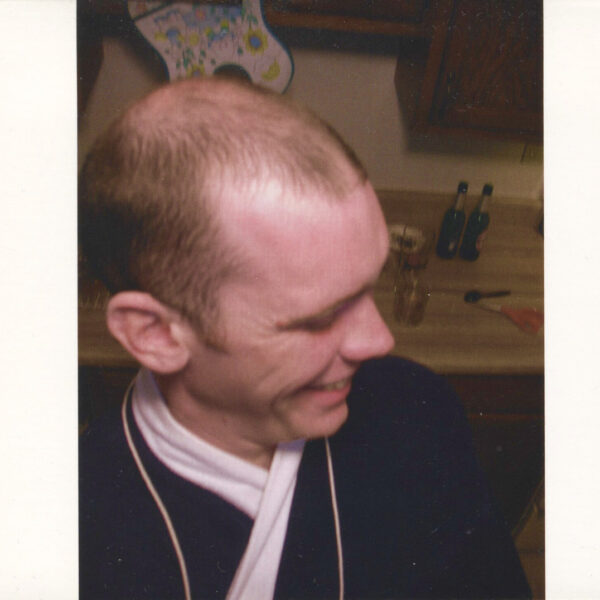 Graham Lambkin (formerly of The Shadow Ring, natch) sends his latest report from the inner recesses of his curlicued mind, in the form of new CD Salmon Run (KYE 02). Interestingly this is the second-only release on his own label, the first one being a solo LP of extreme tapework called Poem (For Voice and Tape) from 2001. Here, on a CD uncluttered with peripheral information – just the titles, catalogue number and expressions of gratitude to friends and family – Lambkin seems to be serving up further experiments and exercises in the surreal, using to the full his uniquely twisted approach to the art of electro-acoustic. I’m slightly prepared by last year’s Draining The Vats tape, which contained at least one track that used treatments and loops of classical music CDs alongside home field recordings, and that eerie episode – called ‘Untitled’ as I recall – does seem to prefigure some of these perplexing Salmon Run constructs. ‘Glinkamix’, for example, posits mixed-up recordings of Russian composer Glinka running in real time with unidentifiable sonic diary statements captured direct from the Lambkin household. I’ve only had time for a five-minute sojourn through the cuts here, but I’m already convinced this record is gonna be a major headscratcher in my home for weeks to come, causing my furrowed brow to knit into a folded rug of bafflement. Recommended! I’ve no idea how you can get a copy of this, though I suppose your best bet is to start with the Swill Radio list. Graham was interviewed, along with Darren Harris of The Shadow Ring, in TSP 14 (which just sold out this week).

The American Public Guilt label has, like a gigantic vulture or condor, just dispatched a triplet of three-inch CDRs like baby mice into the hungry beaks of the awaiting goslings. Harm Stryker‘s eponymous release (PGL001) is a sonic construct put together by a duo, Kelly Norse and Kenneth Yates, and housed in a tiny sleeve with a cover-mounted photograph of a contrail and a triangular tower in shilhouette, a relaxing view which you can contemplate as you follow the twists of turns of their highly dynamic electronic drone overlaid with colourful barbs. Darsombra have vomited out Deliriums and Death (PGL002), which could be my personal fave of the three – suspect this is ‘art-metal’ in the Nadja mould, built up from relentless overdubs of feedback and loops by the tireless Brian Daniloski working overtime with his amplifiers and four-track. Really nice screenprinted artwork on textured paper too, a mini-frieze by germ?, which skillfully blends decorative typography with darker imagery. Finally, for sheer power and anti-social banging blasts, you need only scoop up your copy of Korperschwache‘s A Mountain of Skulls for the Clueless Cowboy (PGL003). Assuming you’ll permit a record with a dumb title like that past the gates of your abode, you’ll be amply repaid by full-bodied guitar and headache-inducing drum noise from this Texan duo of RKF and Doktor Omega, rough customers with beards who take their cues from experimental Black Metal and guitar-based noise bands, snatching the prize coarsely from the hands of more sensitive artists like Hototogisu. All these gems are limited to 100 copies, so today’s tip is to utilise thy cloven hooves for online purchase with appropriate speed.

Every so often we’re sent CDs in outré or startling packages which, however innovative, are nearly impossible to open. On a bad day, I can be driven to distraction by such arrivals, and after ten minutes of trying without success to get to the CD, will fling it back in the box with many an invective. Or crash it over my own head in an action of despair. Such a one is Vertonen‘s new CDR, Not All Who Wander Are Lost (BANNED PRODUCTION NO NUMBER), but being packaged in balsa wood, it made negligible impression as it bounced off my insensate noggin. As a balm to my pain, this promises to be a very quiet 18 minutes of limpid tones and vague washes, and may have something to do with alchemical processes; mercury is mentioned in the press notes, but perhaps for reasons quite unrelated to my favourite Renaissance science. Vertonen is Mr Edwards from Chicago who has sent us a solo CD (Stations) on the C.I.P. label, giving further evidence of his many and varied untamed experiments in sound. The balsa wood package, which at first seemed as elaborate as a Chinese puzzle, is in fact opened simply by cutting open the paper band which surrounds it, said band being decorated with most apt ‘navigational’ artworks that fit the ‘lost’ theme of the title and suggest this Californian label are bidding for product placement in the latest Pirates of the Caribbean movie.