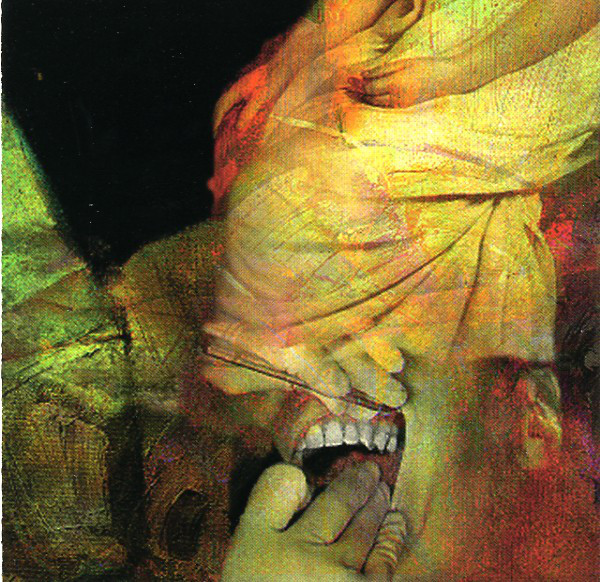 Points of Friction are veteran west-coast loons who formed up in 1981 after seeing Captain Beefheart play live. Which makes them welcome in my house. Here they be, hairy and wild-eyed, with a fascinating combo-bucket of sonic goop called Afterlife DNA Finger-Painting (MELON EXPANDER 003), a fiendish proposition dripping like so much alien gumbo from the skies over Los Angeles. The five-piece of extra-terrestrial genius wing-wangs made this in Reseda CA during 2004, unbeknownst to the eyes and ears of the secret anti-imagination police, who would have forcibly halted proceedings if they knew. I’m personally very delighted to hear from Damian Bisciglia, one of the Friction tribe, who operated as Agog in Seattle making astonishingly twisted recordings in a sculptive way, and equally tactile sculptures from metal and wax. Here he is with Tim Alexander, Mitchell Brown, Joseph Hammer and Kenny Ryman, all of whom are likely to prove gifted manglers of electronics, moogs, tapes, loops and more besides, glorping their beefy hearts out while Damian handles the birdcage and metal chores. With track titles like ‘Artichoke Tickle’ and ‘Spores of the Aquifer’, plus a closing long track telling a story about a Salamander laughing out loud, you know we’re in for some seriously intense peyote-induced surrealist visions here! Looking forward to suspending my frontal lobes in a bathtub of ether for one hour while I enjoy this warparoonie, with its nauseous sleeve art of superimposed photos – cell structures, teeth, probing hands, mystery robes, all locked together in a nightmarish overlay vision of green, orange and red. What a treat!

Spaceheads and Max Eastley descend from the astral planes with their latest team-up on the French Bip-Hop label, proposing to take us A Very Long Way From Anywhere Else (BLEEP35) – a timely update perhaps on The Stones’ ‘2000 Light years from Home’. Spaceheads is trumpeter-through-electronics Andy Diagram with his friend Richard Harrison on drums, while Max Eastley is of course a well-respected and important UK improviser who, as fate would have it, was also a multi-media tutor at my old art college in the 1980s. The previous effort by this combo came out in 2001, and sad to say I can’t recall that it impressed me much; let’s hope this new mix of moody electronics and live playing of ‘the arc’ (Max’s monochord made of wood and wire; half-sculpture, half-instrument) will fare better and repay a closer listening. Titles evoke wistful abstractions to do with loneliness, dreams, time, travel, statues…kind of a mini De Chirico painting catalogue, in sound. Eastley also contributed the cover art with its richly associative images.

Beautiful piece of packaging from France surrounding the new release by Les Klebs (PP0506); it’s an outsize wallet (they call it a ‘Phonographic Envelope’) packed with a nifty A5-sized mini-comic rendered by Le Dernier Cri graphiste BlexBolex telling the moving saga of one large dog in a sailor suit and his bone, and drawn muchly in the European style such that it resembles a lost portfolio of lithographs by the kinder, warmer brother of George Grosz. Meanwhile Les Klebs (a five-piece of French electro-acoustic players) contribute a warm mix of sensual improvised soup, using a fairly standard minimal jazz set-up (clarinet, double bass) alongside turntable, synth and live mixing. They cook up one flavoursome track in 37 mins. Among their ranks are Xavier Charles, Jean Pallandre and Laurent Sassi, and they’ve been at it since 2004. The record label, Ouïe/Dire Production, thank me in advance for forwarding a copy of the possible chronicle which I might write in connection with this disc; you see how the French are always so polite? That’s what we lack in this rotten country!

While we’re still singing the praises of France, Sylvain Chauveau sends four CDs from his Paris home, indicative perhaps of his many projects and collaborative actions…of these, the trio ON seem most appealing to me at this time. Joined by Steven Hess on perc and prepared piano, M. Chauveau plays the prepared guitar, and their buddy Pierre-Yves Macé does processing and mixing to produce the very low-key Second Souffle (BROCOLI 003). They eke some reasonably intense static sounds from their playing, evidently very tightly-focused on their work…same could be said for Ensemble 0, who released Music Of Wheel (CREATIVE SOURCES RECORDINGS CS 086) on this Portuguese label. Here, Chauveau joins a foursome with Joel Merah, Maitane Sebastian, and Stéphane Garin; they mostly play acoustic instruments, incl cello, piano, and a fine glockenspiel…this slow and quiet material may take some time to yield up its secrets, but it has accuracy and clarity…surface appearances bring to mind the work of Tilbury in AMM. The six ‘fragments’ on the CD came out a project based on generating different musical pieces all based on the same score by Merah. In the right mood, this exacting musical emptiness could actually yield dividends to the stress-free ear. In like manner, we have stretchandrelax who are Félicia Atkinson and Elise Ladoué, whose record title Instead Of Buying Shoes (NOWAKI NO NUMBER) simply sounds like a piece of sensible advice. Chauveau isn’t here, but is thanked. The record is 14 tracks of aural collage that are barely audible and barely extant; their experiments in unobtrusiveness include obscured breathy mumbling, quiet and tasteful background electronica, and simple delicate tape manipulation, all rendered in the service of non-shoe connected activity. The last CD in the packet is Arca‘s On Ne Distinguait plus les Têtes (ICI D’AILLEURS ida038), where Chauveau is joined by Joan Cambon on a collection of lyrical songs, for which he handles the vocal parts himself. Certainly the ambiguous title poses a fine metaphysical conundrum we’ve all faced at one time or another, but these wistful, melancholic ballads and songs – and their rather portentous themes – throw up too many barriers for this listener.