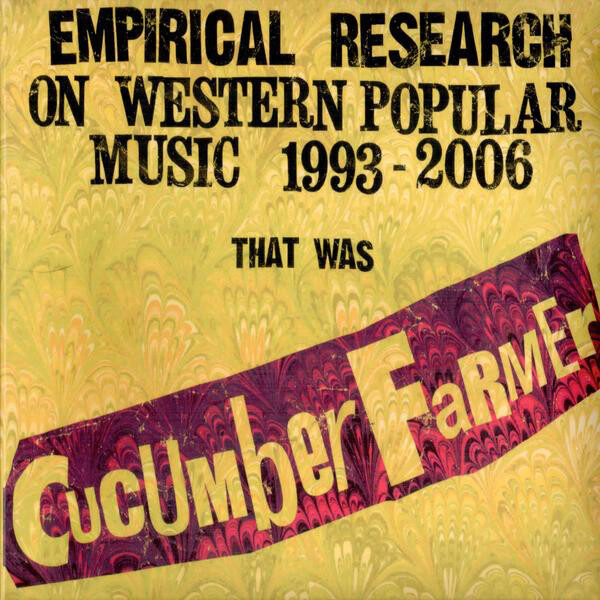 Second update as we clear the decks for action…first thing grabbed from the cardboard pit is a frankly bizarre-looking package provided by Cucumber Farmer. Their Empirical Research on Western Popular Music 1993-2006 (AMERICAN BROTHERS ABR086) is paired with a second disc credited to Pink Twins, called Reconstructions of Western Popular Music – presumably a remix of the first emanation. The Cucumber guys are a five-piece of guitarists and singers, occasionally augmented by guest players on keyboard and machines. Their names look kinda Finnish. The gatefold spread is packed with dense meta-textual commentary the like of which we haven’t seen since Paul Morley’s ZTT releases blighted UK pop in 1984, and the front cover is a pastiche of the Sex Pistols LP. Plus there’s a quote from Nietzsche on the back cover. There may be one too many knowing references going on here (and we haven’t even got to the track titles yet!), but the music seems decent enough, inoffensive slow-stonerish rock laced with studio echo, additional foreign sounds and heavily disguised processed vocalising.

We all love it when avant-gardesters pick up a familiar instrument such as the guitar and emerge with a record which seems to have nothing whatever to do with what we think we know about the guitar. Andy Moor has thrown his trilby into the ring with Marker (UNSOUNDS U14), wringing many a crinkly effect from the neck of his axe across 15 adventurous cuts, sometimes doing it with overdubbing and multitracking (is there a difference? In his mind, yes). Plus he has seen fit to regale us with lush colour photographs of his exciting travels abroad, in the inserted colour booklet to this digipack. Judging by the sharp rendering and baffling choice of subject, he clearly intends to give Jon Wozencroft some heavy competition. The disc is pressed on a Sony DACD, which presumably affords superior listening enjoyment.

Business as usual with Giuseppe Ielasi on August (12K1044), his latest release for the American 12K label which has produced many excellent minimal meisterwerks. The Italian genius turns in five long tracks of very discreet and gently textured humming fragility, aided in places by the trumpet of Heimo Wallner and the tape recorder of Renato Rinaldi. The intriguing front cover portrays a dog lying down in some urban conurbation in Hanoi, a photograph which rejoices in many perplexing reflections.

I’ve kind of lost touch with Sunburned Hand of the Man and have not been following their recorded exploits with the sort of devotion that I might. Their new Fire Escape (SMALLTOWN SUPERSOUND STS134CD) however shows they have come some considerable distance since I last auditioned them. Nine studio recordings made at a London location, and the core Sunburners (the only names I’m certain of are those of John Moloney, the ‘leader’ and drummer, plus the excellent guitarist Marc Orleans) are joined by Bridget Hayden and Michael Flower, who used to be in Vibracathedral Orchestra. Tunes which formerly would have lasted for at least one side of an LP are now trimmed to five minutes of punchy, semi-psychedelic noodling. The sound is a lot ‘crisper’ than I ever recall hearing from this band, and in places they seem to be aiming at a species of avant-garde Funkadelic jam session (although the model in their minds was probably the Sun Ra Arkestra), while a title such as ‘Captain Knowhere’ gives a nod and a wink to Jerry Garcia of The Dead. Released on the very cool Norwegian label and with crazed colour cover artwork by EYE of Boredoms.

The great American Alvin Curran (avant composer and core member of MEV) is certainly enjoying a new lease of life in recent years, oft-times collaborating with aspiring and talented young European electronicists (he made one record with Domenico Sciajno in 2004). The Art of the Fluke (TEAR RECORDS TEAR004) is one such, made with Cenk Ergün. The eight tracks within are presumably concocted from a mixture of sound samples and electronic bites, stitched together inside the virtual space of a heavy-duty computer. The titles, such as ‘moustrapballbait’, are fairly impenetrable, and the inside sleeve note muses wistfully on the occurrence of chance accidents in the world, pointing with one finger towards the lottery wheel and with another towards six-headed dogs buried in a tar pit. The front cover photo, with its close-up of impasto paint smeared on a canvas, is likewise inviting us to discover rich chance events in the visual mode. Verily, that old John Cage concept of aleatory-ness has become the belief system that just keeps on giving.